—Free Literature Offered— Schottel-Werft, Spay/Rhine, West Germany, recently received an extensive order from the British shipbuilding group North East Shipbuilders, Ltd. of Sunderland for SRP 350/350 Rudderpropellers, and SST-612 DST steering systems with Copilot 2000. The Schottel equipment is to be installed aboard 24 RO/RO ferries being built in the U.K. for the Danish trading company PZ Trading A/S.

Each of the 2000 Superflex ferries being built will feature four Schottel Rudderpropellers. The Schottel units were selected because they feature flexible, reliable, economical and efficient operation. The Superflex 2000 vessels, which will be operated and chartered throughout the world, are designed for all-year, 24- hour operation.

Built under special survey from Lloyd's Register, the ferries are approved for unrestricted operation in international routes. Particular attention was paid to the development of the ship's lines and propulsion efficiency. Extensive tests performed at Versuchsanstalt fur Binnenschiffbau in Duisburg resulted in a hull shape for which the power input to all four propellers is independent of the direction in which the ship is moving. This means that the fixed-pitch propellers at both the bow and stern can develop full thrust in both directions of vessel motion without to match the motor speed. This concept has made it possible for a fixed-pitch propeller installation to be employed, which is capable of performing like a controllable- pitch propeller in varying service conditions.

The design of the Superflex 2000 ferry makes it possible for all propulsion components to be readily exchanged and for service and repair work to be carried out without impeding the operation of the ships.

This was the reason behind the choice of a diesel-electric propulsion system. Both the standard diesel engines driving the generators and the electric motors powering the Schottel Rudderpropellers run at a speed of 1,800 rpm. In order to achieve maximum propeller efficiency, the straightforward configuration of the entire propulsion system necessitates Rudderpropellers with a high reduction ratio and maximum propeller diameter.

The installed Schottel SRP 350/ 350 systems have a reduction ratio of 5.02:1 and a propeller diameter of 1,700 mm. All four identical Rudderpropeller units can be interchanged diagonally across the length of the ship. Like other components in the ferry propulsion system, they can be installed and removed with simple equipment on board.

An electrohydraulic Schottel SST 612-DST steering system with a Copilot 2000 was chosen for vessel navigation.

The hull design and the Schottel propulsion systems provide the Superflex ferries with outstanding maneuverability, an important asset when operating in narrow waters and harbors. 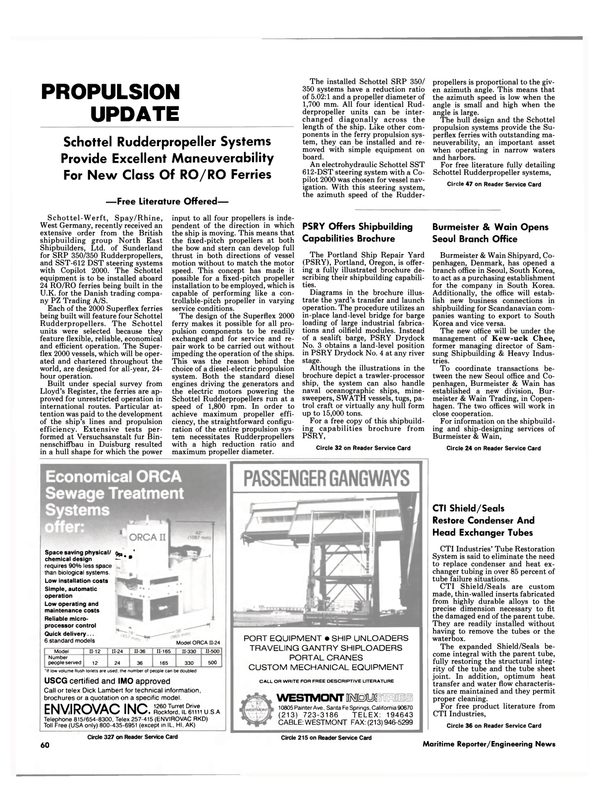