—Brochures Offered— The repowering of three of San Francisco's commuter ferries are saving their owner, Golden Gate Bridge, Highway and Transportation District, more than a quarter of a million dollars a year in fuel costs, according to their manager. The 725-passenger ferries each feature a new pair of fuel-efficient Detroit Diesel 16V-149TIB diesel engines.

The MS San Francisco, the first of the three ferries to be repowered, has been in service for two years.

Two other ferries, the MS Marin and MS Sonoma joined her in service one year ago. Ferry manager Eric Robinson has found "dramatically improved performance" from the repowered boats, leading to a savings in commute time as well as impressive dollar savings." These savings are being achieved despite a reduction of propulsion power from an original 7,500 shaft horsepower to 3,100 shp with the new Detroit Diesel engines. The new engines are both quiet and reliable.

The economies gained from the repowering program, which was performed at Southwest Marine of San Diego, Calif., will show up in expanded service of the ferries, which were built to relieve commuter congestion on the Golden Gate Bridge.

"This is a great help," reporeted Mr. Robinson in noting a 60 percent reduction in fuel consumption.

"When the ferries were originally designed in the 1970s, fuel prices hadn't taken off. We have needed some more efficient power for a long time. Now we've got it." The three ferries provide luxury passenger-only commuter service between the Ferry Building terminal close to downtown San Francisco and the port of Larkspur serving the residential communities of Marin County.

Fuel savings have already met the goals set for the repowering, and overall boat performance has exceeded management's expectations.

Hourly full power total fuel consumption has averaged 170 gallons and one genset. Cruising speed of 20.5 knots has exceeded the boat's design sped of 20.2 knots, surprising in view of the great reduction in shaft horsepower.

A critical demand has been that ferry service be increased to meet anticipated ridership, and that the division's high level of on-time ferry departures and landings be maintained.

The markedly improved performance of the boats at slow and intermediate speeds as well as improved maneuverability in the wind (the result of conversion to propellor propulsion) is alreay paying off in terms of time saving during docking and departures and has added an important margin of safety to ferry operation.

"When you're trying to save minutes in an operation like ours, docking time is one of the things you have to consider. We've shaved a couple of minutes per run. Currently we're making runs in 42 to 43 minutes instead of the scheduled 45 minutes," continued Mr. Robinson.

"The key to it all, of course, is that we didn't sacrifice cruising time to get those big fuel savings." The main engines were supplied by Sierra Detroit Diesel of Emeryville, Calif. Williams and Lane of San Leandro, Calif, supplied two Detroit Diesel 4-71T 100-kW gensets for each boat. They provide all ships' power. 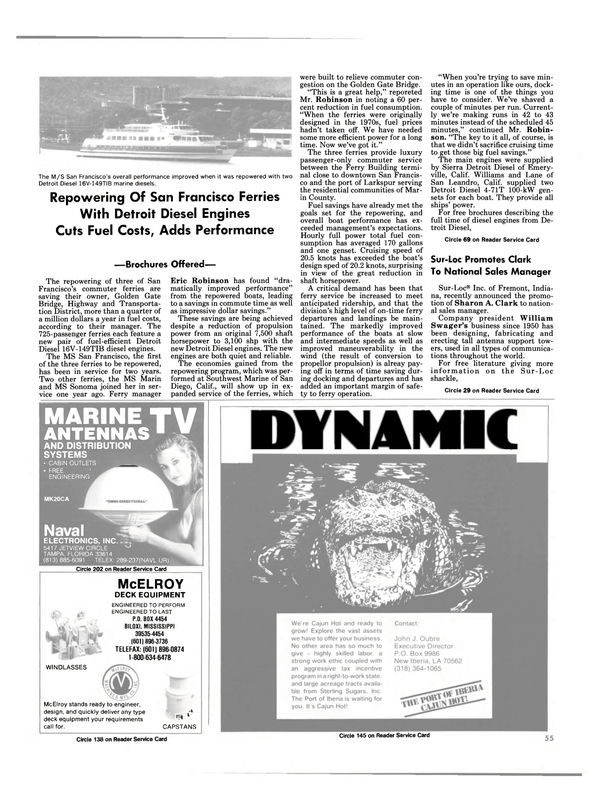