2 5 % Increase In Passenger Capacity By 1990 The cruise business is experiencing a new construction boom, with more than 20 new cruise ships under construction, on order, or in the planning stage. Passenger capacity of the cruise fleet is expected to increase by 25 percent up to 1990.

According to Veritas Forum, the quarterly corporate journal of the classification society Det norske Veritas, each year up to 1990, sic to eight new cruise liners will be delivered, most of which are slated for Caribbean waters. Det norske Veritas expects to classify half of these vessels.

At present, 46 out of some 90 cruising vessels of more than 5,000 dwt operate in the Miami-Bahamas- Caribbean region. A steady growth in the number of ships in this area is expected in the years ahead. Miami, the cruise capital of the world, currently is the homeport to 23 cruise vessels. The Miami Port Authority invests about $15 million per year on improving its facilities, and anticipates that by the turn of the century more than 4 million passengers will be taking cruises out of Miami.

In interviews with Veritas Forum, chief executives of the Royal Caribbean Cruise Line, Kloster Cruise and Carnival Cruise Lines—three of the world's largest cruise companies— all expressed concern with the ability of the Caribbean islands to cope with the increasing cruise traffic.

Einar Kloster, president of Kloster Cruise, said: "When you see the harbor of St. Thomas at its busiest, you may well wonder how the island manages to stay afloat. And how will the situation look when the same number of ships are carrying twice as many passengers? We will have to cooperate with the island authorities in regulating the traffic." Unlike shipping in general where most ships are scrapped after a life span of 15-20 years, relatively few ships are scrapped in the cruise industry—cruise ships have an average life span of 40 years. The Britanis, the world's oldest cruise ship, built in 1932, is still sailing between Miami, the Bahamas and Mexico.

"Old ships are easily renovated and introduced as new in this market," said Egil Abrahamsen, RCCL board chairman. "Older ships naturally offer the best bargins price wise. However, it would be in the best interests of general safety to replace some of the oldest ships. The more new ships, the greater the safety advantages gained," he concluded.

Mickey Arison, president of Carnival Cruise Lines, believes that, "there are still not enough new ships to drive the old ships off the market, but this will start to take place in the 1990s." Cruise industry representatives refute the assertion that there is a 15 percent overcapacity in the American market.

For example, Oddmund Grunstad, president of the Crown Cruise Line in Boca Raton, north of Miami, stated that he could not "see any signs of overcapacity in the cruise market. The total capacity of the cruise fleet worldwide barely exceeds the capacity of the hotels in the Disney World area, some 60,000 beds." The fact that cruise companies readily spend as much as 20-25 percent of their annual turnover on marketing proves that cruise activities are more in the line of tourism than shipping.

According to Veritas Forum, the boom in ships on order or in the planning stage confirms that the cruise business is ready to take on the increasing traffic created by the steady rise in the popularity of the cruise as a vacation. With a sevenday cruise on a superliner costing as little as $600, the cruise companies are attracting a new and larger market. 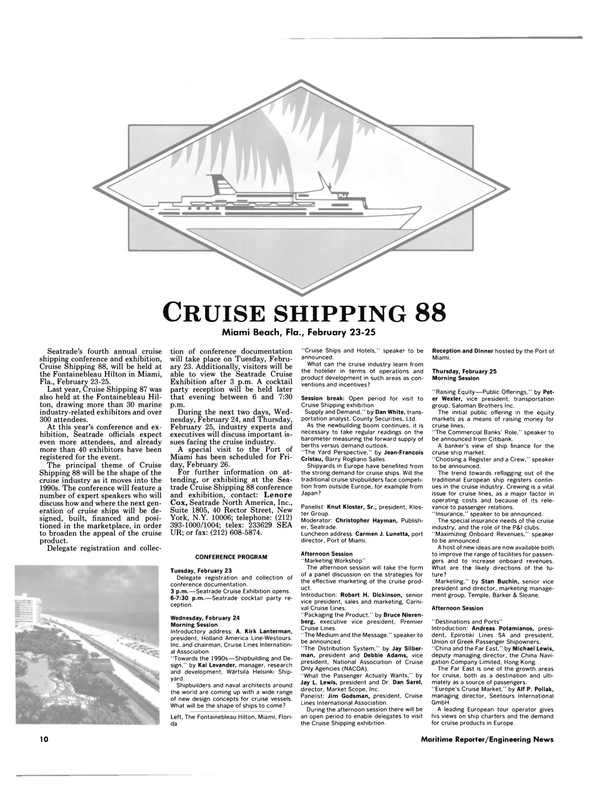