The rebirth of the passenger/cargo ship S.S. Monterey, idled since 1978, as a modern 660-passenger luxury cruise liner is in full swing at Wartsila Marine Industries' Helsinki yard.

The Helsinki yard is performing all the outfitting and interior work on the U.S. flagship, which includes the repair and upgrading of existing machinery and equipment, and installation of new sewage and wastehandling plants, a bilge water separator and bowthruster. Additionally, Wartsila is refurbishing the Monterey's existing passenger cabins, as well as installing 127 new cabins, some of which are suites and minisuites. The crew compartments are also being modernized and 23 new cabins are being installed to handle the expected complement of 265. Space for the new cabins was created by the enlargement of the superstructure to the fore and aft of the ship. Some of the new cabins will be located in the existing cargo holds at both ends of the vessel.

In addition, five conference rooms will be added, along with the modernization of the vessel's lounge, cinema and galley. Other new features of the Monterey will include an all-day dining facility, boutique, deck/sport facilities, swimming pool and jacuzzis.

The conversion work on the Monterey is being performed under a contract with Aloha Pacific Cruises Inc., Alexandria, Va.

Last year, under a subcontract from Wartsila, Tacoma Boatbuilding Co., Tacoma, Wash., performed structural modifications and repairs to the hull and superstructure of the 563-foot Monterey in accordance with the Jones Act. The Jones Act specifies that all structural modifications of a U.S.-flag vessel must be carried out in the U.S., in order to keep its U.S. coastline trading provisions.

Tacoma completed the work in early October, and the Monterey was towed to Helsinki for her outfitting and interior work.

Upon her delivery in the spring of 1988, the refurbished Monterey will be operated by Aloha Pacific Inc.

in the interisland Hawaiian cruise market.

For free literature on the shipbuilding, ship-repairing and converting services and capabilities of Wartsila Marine, Circle 11 on Reader Service Card 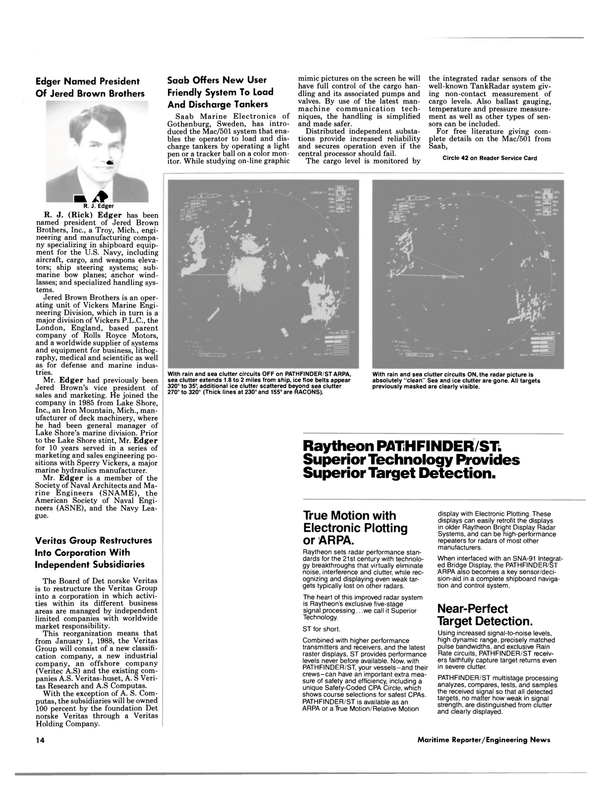