About 100 attendees at the recent Government Industry Forum on the U.S. Shipbuilding and Repair Defense Mobilization Base received the most comprehensive brief on the current status and future prospects for the marine industry. The significance of the issues discussed, the indepth presentations by the qualified and knowledgeable speakers, together with the far-reaching ramifications of the issues and potential legislation involved cannot be adequately and accurately described in the space available for this article.

One must hear the complete presentations to understand the complexity of the issues involved and the differing views of the various parties, DoD, Navy, shipbuilders, suppliers and indeed foreign countries, for they, too, have a tremendous influence on which way the industry will go in the future.

This article outlines and highlight the general areas covered by each speaker. Transcripts of the entire forum are available from MMA for a nominal charge of $15 to cover reproduction and postage. Requests should be addressed to MMA, 1700 K Street NW, Suite 903, Washington, D.C. 20006.

The following was reported by Dan Marangiello of the MMA.

During the forum, all speakers recognized the serious deterioration of the shipbuilding and repair capability of the U.S. The tone of the meeting was set by J. P. Janetatos of Baker & McKenzie, who noted that after the spare parts problems of three-four years ago, Congress reacted with legislation, including the Competition in Contracting Act, and DoD and the Navy complied with a vengeance. Low bid became the order of the day, with a seemingly "quality be damned" attitude.

Although the pendulum seems to be swinging back with recent Senate subcommittee investigations on defective material, the emphasis in reality is on prominent criminal cases, and not on the systemic problem of going to the low bidder regardless of past performance and capability. A short-term and easy remedy would be to divert what little business there is back into the maritime industrial base, that is to equipment manufacturers and stockyards and away from replicators and pirates. This action will also provide the fleet with safe, reliable and cost-effective machinery.

Congresswoman Helen Bentley related the events that are undermining the industrial base of this nation. Our policy of "free" trade has allowed American industry to be overwhelmed by foreign firms. Markets were specifically targeted, undercut and gobbled up. So began the de-industrialization of America.

Taxpayers' money is being spent by our government overseas to help Europeans develop weapons and products that compete with our own. Japan is spending 135 million dollars this year to influence our elected officials. We want "fair" trade, not "free" trade. There is no free trade in the world. All employees must become involved and let their elected representatives know they are concerned about their jobs and the industrial base and security of the United States.

William Haggett, president and CEO of Bath Iron Works, representing the shipbuilding segment of the marine industry noted that the industry iS in real peril and sinking rapidly. The whole industry is in deep trouble—merchant marine, shipping operators, shipbuildings and equipment manufacturers.

Should an island nation commit resources to arrest and reverse this trend and assure an adequate, even minimal base? You get very mixed answers to this question in Washington, D.C. He related specifics and conclusions of the Commission on Merchant Marine and Defense of which he was a member.

Colleen Preston, Counsel for the House Armed Services Committee, closed the morning session by describing what is going on in the "buy American" legislation. Congress is trying to balance protecting the U.S. industrial base while complying with the general agreement on tariffs and trade and our cooperative memorandum of understanding with foreign allies. Even though there is a strong indication that equal treatment is not a "two-way street," Congress still looks at the total DoD trade balance (2.8 to 1 in our favor) and not at the disastrous situation in shipbuilding by itself.

After lunch, Adm. W. D. Smith, USN, Director of Navy Programming Plans, talked of the Navy's programs, budgets, and five-year defense plan. He said that military personnel salaries and benefits would not be cut, therefore cuts would come elsewhere in the budget crunch. Maintenance and repair dollars would be in some jeopardy.

Bird-Johnson president and CEO Charles Orem provided the forum with a status report on the U.S.

marine industry industry subcontractor base. Included in this grouping are all the equipment, component and system suppliers to shipyards, repair facilities, ship operators, and the Navy, the Coast Guard and the Maritime Administration.

Taken together, these subcontractors constitute the full scope of support for our maritime defense industrial mobilization base and comprise the complete infrastructure for the country's maritime industry. Clearly, the economic and physical health of these subcontractors is of critical importance to our country. Mr.

Orem went on to provide an overview of a portion of this supplier community and focus attention, through illustrative examples, on some industry statistics and key critical factors directly related thereto. 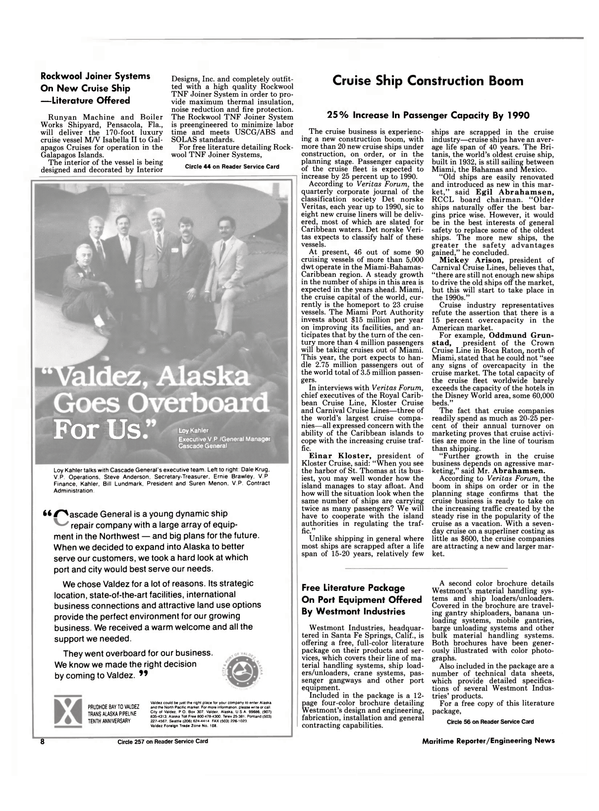