Aircraft Carrier of the Future

Pause for eight minutes, and experience how long it feels. Now imagine that same eight minutes spent pinned down by someone trying to kill you.

The next-generation of aircraft carrier must fulfill old and new roles alike. The question now: what will it look like, and how much will it cost?

Strategic air superiority is invaluable in every single future war scenario, crucial to hitting land-based targets and field troop support. Army planners reckon that eight minutes is the maximum amount of time from initial target call to weapons on target.

As the U.S. Navy literally reinvents itself over the next decade, questions turn to the role of the premier symbol of U.S. power and foreign policy — the nuclear powered aircraft carrier — referred to "90,000 tons of diplomacy" by its Newport News, Va.-based builder.

A recent report from the Defense Science Board Task Force dubbed "Future of the Aircraft Carrier" helps shed some light. The creation of the modern aircraft carrier is nothing short of a production miracle. It takes about seven years, almost 50,000 tons of precision- welded steel, a billion parts from 3.000 suppliers and hundreds of miles of wire and cable to build what is easily the most formidable and dominating war machine afloat. Special bonuses: No two are exactly alike; each is designed to dominate the seas for 50 years, stopping for refueling just once in its lifetime.

There is little doubt as to a nuclear aircraft carrier's value, both physically and psychologically. It provides a launching pad for U.S. forces when a land-based alternative is unavailable, and undoubtedly has played a major role in directing any number of delicate negotiations.

But as the U.S. Navy focuses more on the gathering, dissemination and incorporation of information, with more intent focus on smaller, faster craft to carry out a number of new initiatives that better reflect today's political and military environment, questions ranging from the need for to the look and role of next-generation carriers has been loudly debated. Seen largely as a tool of the Cold War, the recent report from the Defense Science Board noted that "the current sea-based air system design is 40 years old and has little margin for inserting new capabilities," noting it possesses limited weight, stability and electrical power margins. Concurrently, the report reasons that air superiority is critical to all future battles in which the U.S. may engage, and aircraft carriers provide decisive air-strike capabilities.

Questions currently revolve on the next generation, dubbed CVNX.

Already delayed one year due to review, the Defense Board terms the construction of CVNX-1 as "a crucial step in reducing carrier operating costs," and that the ship be built as planned, but concludes that it is simply the only nearterm option available to the U.S. Navy.

Specifically, the Task Force recommends that today it is necessary to kickstart a plan to "aggressively pursue new sea-based air system concepts to keep ahead of missions and threats," saying that "carrier designs CVNX-2 and beyond should not be a foregone conclusion." In short, there are serious doubts about the current Nimitz class or the new design to work quickly and safely in the Littoral, which is paramount to the new Navy. Aside from the physical and.

technological ship shape, the Task Force recommends the establishment of a Carrier Technology Oversight Council (CARTOC) modeled after the submarine equivalent, SUBTOC, and that increasing attentioned be paid to the way in which the new breed of carriers are funded. Acronyms aside, the key to the final product was laid in the mass of corporate consolidations which led Northrop Grumman to buy Newport News Shipbuilding enroute to an estimated $26 billion in acquisitions.

Northrop Grumman not only builds the ships, it supplies many of the aircraft and electronics, allowing for an unprecedented level of cooperation among designers at an early stage.

Today, the Navy prepares to take delivery of USS Ronald Reagan (CVN 76) in 2003, and has just started construction on the newly named USS George H.W.

Bush (CVN 77), named after the 41st President and the last of the class. The ship is expected to join the fleet in 2009. 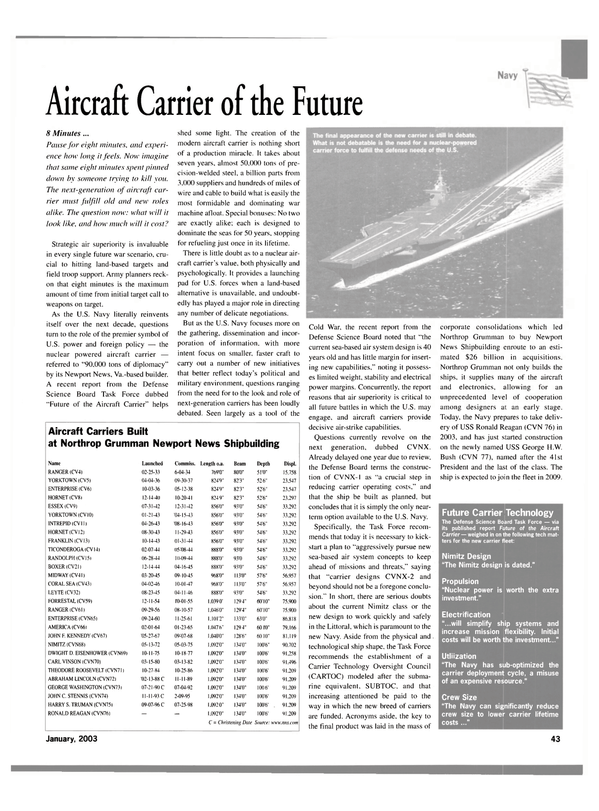 Read Aircraft Carrier of the Future in Pdf, Flash or Html5 edition of January 2003 Maritime Reporter