VideoRay announced that the Cygnus Instruments Mini ROV Thickness Gauge has been specially designed for mounting on the 8-lb. VideoRay Pro ROV. Proven inside the USS Arizona battleship, the gauge is less expensive than the cost of diving excursions to measure thickness underwater and is especially useful for potable water tank inspections.

The gauge uses a technique known as Multiple Echo, which allows metal thickness measurements to be taken without first removing coatings. The unit is pressure tested to 500 meters.

Dedicated software displays the time, date and thickness readings on the surface, and all readings can be stored.

Jon Sharland, Sales and Marketing Manager of Cygnus Instruments, commented, "The gauge is based on the larger ROV mountable unit which has already been proven many times in the harsh conditions of the underwater and offshore industries worldwide. We welcomed the opportunity to work closely with VideoRay to develop a dedicated unit that mounts onto the VideoRay Pro.

Together, we can target applications, such as inside pipelines, that have previously been unfeasible using divers or large ROVs." The Cygnus gauge was used on a VideoRay during a survey of the USS Arizona battleship, which sunk at the start of WWII in Pearl Harbor, Hawaii.

During explorations by the National Park Service Submerged Cultural Resources Unit, the Cygnus gauge aboard a VideoRay traveled up to 150 feet inside the ship to test a wall for structural support and determine levels of deterioration to structural members. 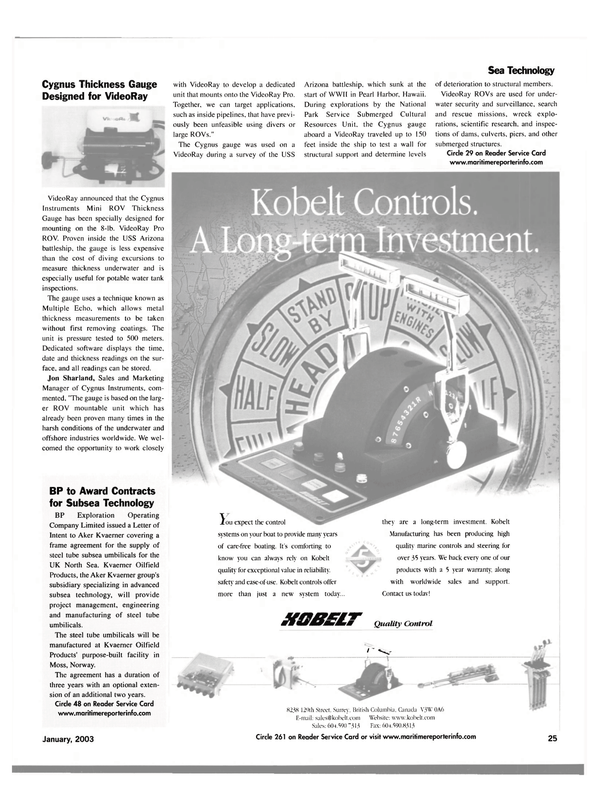