While the owners' grandfather sailed on inland waterways, 50 years ago their capacity was expanded by the addition of some coastal motor vessels up to 150 tons. Since the 70s, the company's core competence has become the worldwide chartering of container ships to big shippers like Maersk or CSAV.

The cargo space is made available and the ships have been subjected to technical refits and the crews increased.

Together with the Heinrich Schepers company within the same line, the family concern now operates 12 container vessels of 1.100 to 2,500 TEU.

"Our ships are everywhere. North and South America...South Africa... the Near East...the Caribbean. Because we go everywhere, we have to be obtainable everywhere," explains Rudolf Schepers, the company's senior boss.

However nowadays this is no big deal.

Up to the middle of the 90s at Schepers, a telex system with its punched tape was responsible for contacts between the ships and the headquarters. From 1995, initially on a trial basis, the Inmarsat satellite communications system has been in use. In the beginning the system was run by DeTeSat through its own ground station, but now France Telecom is in charge.

"At that time the ships reported their positions every two days," reminisces Jan Schepers, the junior boss of the line.

"Nowadays we get in touch with each vessel two or three times per day, by email." Since 1999 this has been the job of the SkyFile 3.0 program, which the operators can download free-of-charge from the Internet, or simply install from a CD-ROM.

Above all communications have become simpler, and don't involve much work. Just a few years back Volkert Stoll, the superintendent of the shipping company, and his staff used to spend up to six hours per workday to deal with a six-week commission, which arrived on board by fax. About 15 pages of text were generated. "Our inspectors then cut the lube oil order out with a pair of scissors, then the electrical order, then the order for paints." These cuttings were then pasted on to a page bearing the company heading, and faxed on to the various suppliers.

Today all that is unnecessary.

You just select the Excel files from the incoming e-mails, and copy them into the e-mail messages for the suppliers.

This cuts down the work to about an hour. Reports of damage on board are also faster and simpler to make now.

The ships used to be equipped with instant cameras. For unusual breakdowns, like a faulty piston in the diesel engine, photographs had to be taken.

Simultaneously expensive phone calls had to be conducted - if this was at all feasible. Nowadays all the ships have digital cameras. The engineer on board photographs the technical fault or the damage to the cargo, and transmits the shots by E-mail to the shippers' headquarters.

These visual documents state the place, the time, and even describe the weather conditions, and are promptly forwarded to the supplier or the insurer.

The partners can react immediately and order replacement parts, maybe pumps, whole systems and so on. This wasn't always the case. With the previous Inmarsat units the staff selected the land earth station themselves, and dialled the number. For Schepers this was an enormous advance on the elaborate telex procedure. Nowadays these transmissions function completely automatically and take just a few seconds.

"There was no need for any training." comments Wolfgang Kalus, the marine inspector at Schepers. "It was all very simple. We installed the system on board ourselves, and the software too." Circle 6 on Reader Service Card www.maritimereporterinfo.com 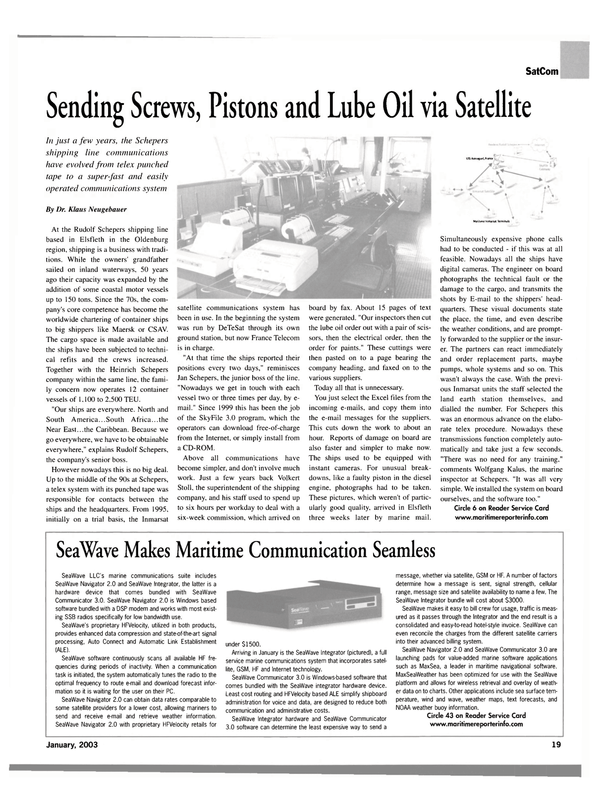