What first began in 1996 as a contract from the U.S. Coast Guard to Bollinger Shipyards to construct one 87-ft. (26.5- m) Marine Protector Class Coastal Patrol Boat (CPB) with options, has since led to the delivery of 50 of these same vessels — all of which are named after marine protected species. The shipyard delivered the USCG Petrel — the last of the 50 vessels - on September 4.

Resulting from increased homeland security measures and other mission requirements, the USCG has received authorization for Bollinger to build up to 13 additional CPB's. With funding already secured, the construction of the 51st vessel will commence during the fourth quarter of 2002, with delivery planned in September 2003, with additional vessels following at one month intervals.

Based on the Damen STAN 2600 design developed for the Hong Kong police, Bollinger modified the design to meet USCG requirements, such as a maximum continuous speed of 25 knots; Patrol speed not less than 10 knots; maneuvering speed not greater than four knots with one engine continuously engaged; and Berthing for a mix of male/female crew members of 10 plus a spare berth.

Power is provided via a pair of MTU 8V 396 TE94 diesel engines developing 1,500 hp drive five-blade propellers on each of the boats through ZF BW 255 reverse/reduction gears. 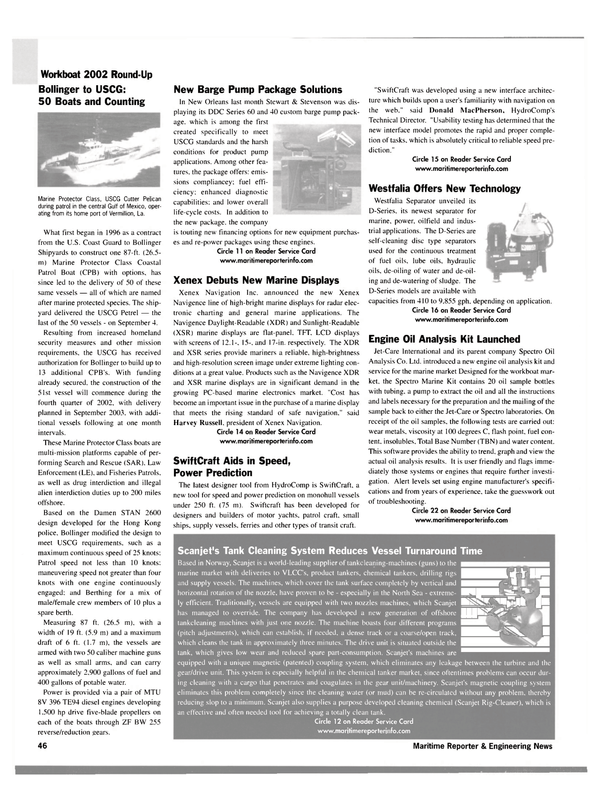