New emission reduction technology was recently proven in a joint test with Holland America and RINA. The test was conducted aboard Veendam.

Reduced emissions from diesel engines at sea has become a rallying cry from legislators to ship owners to diesel engine manufacturers to fuel and additive suppliers. Last month a significant milestone in the fight to reduce emissions was achieved, as emission- reduction technology reportedly been tested successfully on Carnival's Holland America (HAL) ship, Veendam.

The tests were carried out jointly by Carnival Corporate Shipbuilding, HAL and RINA within a common R&D project. The technology is based on injecting water into fuel to create micro-droplets of emulsified fuel. Two pilot units were built and retrofitted on board Veendam. They were tested in accordance with an on board testing protocol developed by RINA. Mario Dogliani, Innovation & Research Manager of RINA, the Italian classification society, said the results of the weeklong tests were extremely successful.

"There was significant reduction of visible smoke and emissions from the diesel engines as well as a decrease in fuel consumption.

Sludge oil was also efficiently burned in the boiler, reducing emissions and without producing visible smoke," he said.

According to Jim Drager, Carnival Corporation's vice president of Corporate Shipbuilding, "The undertaking of this technology development is a further demonstration of Carnival's commitment to working with companies to develop new technology aimed at protecting the environment." This micro-emulsion technology has been patented in the European Onion nations, O.S. and Japan by Ing. Ernesto Mareili, CEO and owner of Mec System, an Italian company and partner in the R&D project. It was initially developed to produce microemulsified fuels for land-based thermal plants and for public bus transportation.

The transfer of this technology to the maritime field was undertaken by Mec System, Cadel Sri, RINA and Carnival Corporate Shipbuilding. The same pilot unit is being tested by Wartsila in its land-based Vaasa laboratory as part of the SAFENVSHIP R&D project. Additional testing and evaluation will continue and Carnival Corporation will equip several ships in its other operating companies with pilot units for additional testing.

The SAFENVSHIP European R&D project was started in April 2002, with a budget of approximately $15 million. This project's purpose is to identify shore-based technologies which can be transferred to cruise ships and ferries. 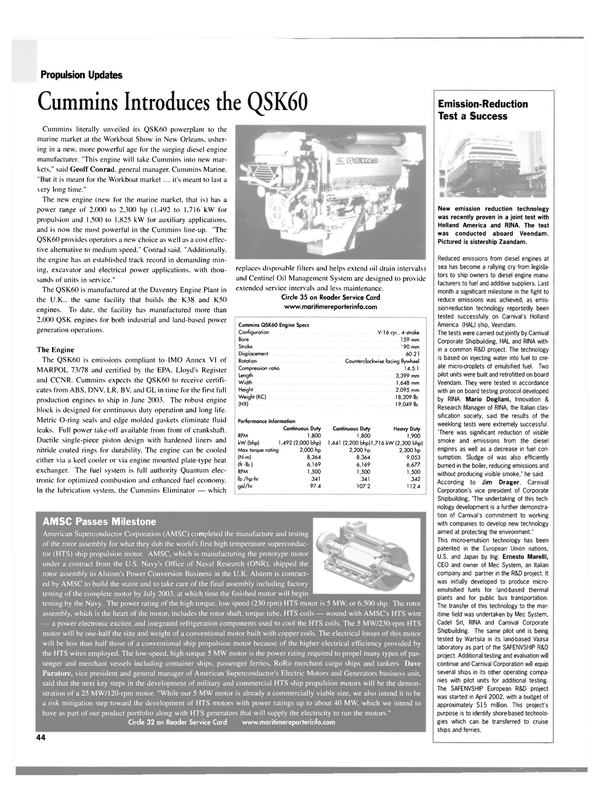