Liferaft Systems Australia (LSA) recently won many contracts to supply locally designed and manufactured Marine Evacuation Systems (MES) worth approximately $3 million. Orders have been received for Marine Evacuation Systems (MES) from Derecktor Shipyards in New York, Rodriquez Cantiere Navali in Italy. Australian shipbuilders Incat Tasmania (2 vessels) and Austal Ships (1 vessel) in Western Australia which demonstrates a strengthening in the market. The initial Derecktor order consists of MES and large capacity liferafts was for the Alaskan Government ferry operator Alaska Marine Highway System, with the potential for more orders. The contract is the first received from an American shipbuilder and the first LSA equipment to be manufactured to U.S. Coast Guard approval. "Orders received from Incat Tasmania for MES to be installed on two vessels that are to operate for the USA military will also strengthen the presence of our product in the USA. with no less than three military vessels operating with LSA MES installed" said Mr Grainger. Incat's first vessel 'Joint Venture HSV - XI' has created enormous interest for LSA, having circumnavigated the world as a showcase for Incat and associated equipment suppliers. The 'flow on effect' is already being experienced, with a steady stream of enquiries from various military applications filtering through to the LSA Hobart and European offices. In addition to the Derecktor and Incat orders, LSA have also secured an order to supply MES to Western Australia shipbuilder Austal Ships. The high-speed vessel will provide a new service route between Rochester and Toronto across Lake Ontario, connecting the United States and Canada. This will see the total number of U.S. ferries with LSA MES installed increase to seven. The order from Italian shipbuilder Rodriquez is the fifth order for LSA equipment installed on their high-speed monohull designed vessels and consists of four MES and five liferafts for delivery in March 2003. 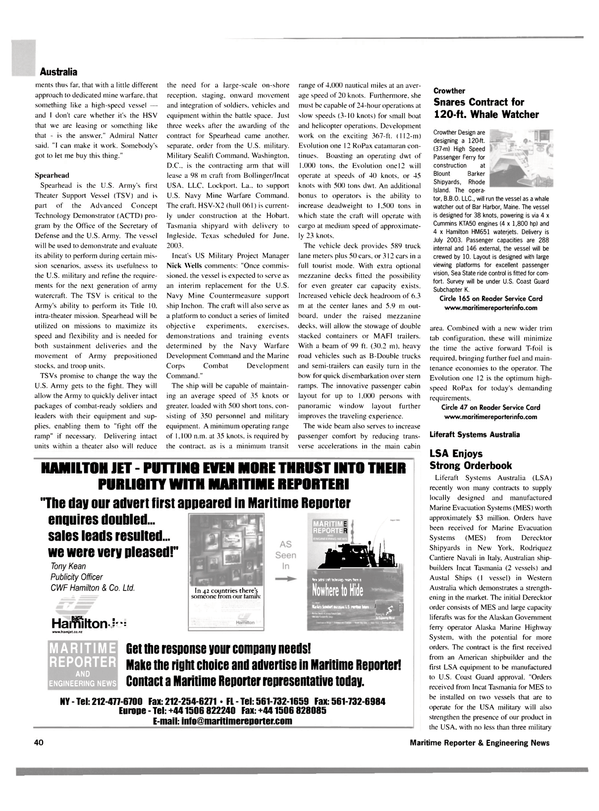