As a response to the marine market's demand for higher power concentrations and increased plant reliability, deliverable at competitive cost, the new offering from Rolls-Royce is stimulating fresh interest within a conservative shipping industry in gas turbine-based solutions.

Building on the company's huge investments in aero engine technology over the past decade, the MT30 gas turbine has been specifically prepared for shipboard applications, combining power density and operating attributes in a manner intended to widen the appeal of gas turbine power among the maritime community. With 36-MW obtainable from a compact unit of barely 9-m (30- ft) in length, a claimed consumption rate of 0.2()7-kg/kWh at maximum output, and 80-percent parts commonality with a proven aero engine of outstanding reliability.

the MT30 holds promise as a challenger to diesel plant options as well as to existing gas turbines.

The MT30 has been engineered to meet the needs of naval ships and sophisticated commercial vessels alike.

The engine's aero parent, the Trent 800, has surpassed two-million running hours since its 1996 service debut. It accounts for nine out of every 10 engines selected for Boeing 111 aircraft, and was the first engine to be certified for ETOPS (Extended range over-water operations by twin-engine aircraft) at entry into service.

The popularity of the Trent 800, and the fact that so much of its componentry is perpetuated in the MT30, has a signal bearing on unit production costs, and therefore on the price at which the marine engine will be cast in the intensely competitive marine market.

The factor of engineering commonality also gives relevance, from a potential marine user's standpoint, to the "99.9- percent dispatch reliability" attributed by Rolls-Royce to the Trent 800 civil aero engine.

The company's commitment to strengthening its position in the marine power domain has been underscored by its creation of a £9-million ($14-million) dedicated test facility for the MT30 at its Bristol site in the UK, where the prototype is now being put through its paces.

A second development engine will be used for endurance tests and the obtaining of Det Norske Veritas type approval, anticipated for August 2003, in keeping with the scheduled commercial release of the first production engines during early 2004.

A steady stream of interested parties from the naval and commercial marine sectors worldwide, including the USA, is being received at Bristol, and the MT30 has already been written into the draft specification for the fast, monohull trailership design proposed by Spanish shipbuilding, ship repair and engineering group IZAR, in conjunction with Rolls-Royce.

The Anglo-Spanish initiative, dubbed the European High-Speed Cargo Vessel (EHSCV), is also expected to lead to a companion RoPax proposal, and was discussed in this column in November's issue. The MT30 has been conceived for both mechanical and electrical drive configurations, and its efficiency is said to be retained at powers down to 25- MW, making for increased application flexibility. Gas turbine plant has certain strengths in terms of trends in target commercial markets, as GE Marine Engines has already well demonstrated by its references for LM-series aeroderivative gas turbines in highspeed ferries and cruise liners.

Lower pollutant exhaust emission levels than those of diesel engines will undoubtedly be valued more and more against a backcloth of proliferating environmental controls and regulations, while a low mechanical noise signature and readily attenuated structural noise transmission hold increasing value in the context of passenger and crew comfort.

The annular combustors of the new marine engine are similar to those of the aero parent, and have been designed to burn commercially available distillate fuel to DMA standard. Consumption is said to be comparable with high-speed diesels at maximum power, and the fuel burn is also designed to match compet- ing gas turbines at 25-MW.

With a total module weight, including the acoustic enclosure, of as little as 22- tons, the power-to-weight ratio is impressive, to say the least. For genset drive applications in cruise ships using electric propulsion motors, the gas turbine permits more flexibility in the ship design process. Engines can be sited in the funnel, or aft near podded propulsors.

for example, so as to make the most effective use of the hull envelope.

Modular construction facilitates shipyard handling in newbuild projects. It expedites major maintenance, such that modules can be removed and replaced in many instances, avoiding the cost of complete engine overhaul.

Although gas turbine plant for cruiseships and fast, powerful ferries is an established option, Rolls-Royce has broken new ground by also advocating the emergent MT30 for LNG carrier propulsion.

The proposal is timely, given the current level of industry interest in possible alternatives to steam turbine plant for large LNG tankers, most recently expressed in the milestone selection of diesel-electric propulsion for a French newbuild. Rolls-Royce says that adoption of an MT30, rated at some 30-MW to ensure a laden speed of 20-knots, would enable engine room length in a 140.000-cu. m. capacity LNG carrier to be reduced by 19-m relative to a comparable steam turbine application. This could release up to 12-percent more of the given hull space for cargo, or alternatively enable a reduction in overall ship size. As with steam turbine plant.

the MT30 could utilize natural gas cargo boil-off. Maintenance contracts covering servicing, overhauls and spare parts supply, a field in which Rolls-Royce continues to show its mettle in the airline industry, are to be offered to support shipping operators and foster competitive through-life costs. The MT30 may be regarded as the first of a new generation of marine gas turbines. For instance, the development would serve as the basis for a 50-MW unit, another aero Trent derivative, proposed for the long-mooted transatlantic FastShip freight carrier project. The timing and extent of follow-on models to the MT30 will no doubt be heavily influenced by market reception to the potent new design encapsulated in the machine now running tin the testbed at Bristol 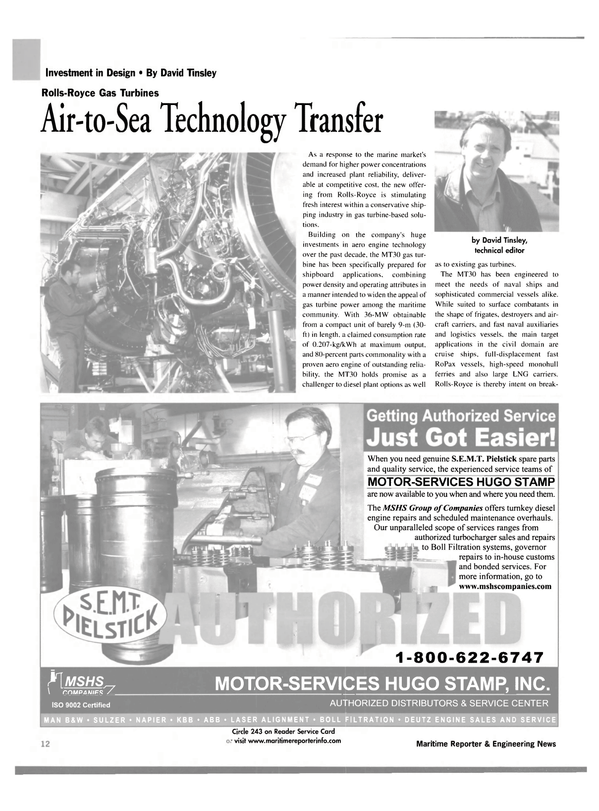