After a series of procedural maneuvers, the 107th Congress adopted the Maritime Transportation Security Act as one of its final bills prior to adjournment.

President Bush signed measure into law on November 25, 2002 (Public Law 107-295). The new law represents the most significant expansion of maritime and port security authority since enactment of the so-called Magnuson Amendment in 1950. This Act contains a number of provisions authorizing the Coast Guard and other agencies to establish maritime security standards and mandate certain security enhancements to be undertaken by maritime industry.

Vulnerability Assessments The Act requires facility and vessel vulnerability assessments to be done by the Coast Guard. The vessel vulnerability assessments will be limited, under this provision, to identification of vessel types that pose a high risk of being involved in a transportation security incident. The term 'transportation security incident' is defined in the Act as a security incident resulting in a significant loss of life, environmental damage, transportation system disruption, or economic disruption in a particular area. It is expected that tank vessels, passenger ships, liquefied natural gas (LNG) and liquefied petroleum gas (LPG) carriers, and container ships will be found vulnerable (at least to some extent) under this criteria.

Similar to oil spill response plans under the Oil Pollution Plan of 1990 (OPA 90). the Secretary of the Department in which the Coast Guard is operating has been tasked with preparing a National Maritime Transportation Security Plan and Area plans for each Captain of the Port (COTP) Zone. Commercial vessels and facilities that the Coast Guard believes may be "The price of liberty is eternal vigilance." — Thomas Jefferson involved in a transportation security incident will be required to prepare and submit to the Coast Guard security plans for deterring a transportation security incident to the maximum extent feasible. The vessel and facility plans must be consistent with the National and Area plans; identify the qualified individual having full authority to implement security actions: identify and ensure by contract or other means approved by the Secretary the availability of security measures necessary to deter to the maximum extent practicable a transportation security incident: and describe the training.

At the same time, the International Maritime Organization (IMO). a specialized agency of the United Nations, has adopted international standards for ship security plans. The U.S. and IMO provisions have numerous similarities, but also some striking differences.

Coast Guard; • a vessel pilot; • an individual engaged on a towing vessel that pushes, pulls, or hauls alongside a tank vessel; • an individual with security sensitive information; and other individuals engaged in port security duties.

A Transportation Security Card may only be denied to one of the above individuals if the Secretary determines that the individual has been convicted within the previous seven years of a felony that either presents a terrorism security risk or causes a severe transportation security impact; has been released from incarceration within the preceding five years for such an offense; may be denied admission to the United States or removed from the United States under the Immigration and Nationality Act; or otherwise poses a terrorism security risk to the United States. A potential problem relates to foreign crewmembers.

The Immigration and Naturalization Service (INS) is currently issuing 'detain on board' orders to large numbers of foreign crewmembers. It is unclear whether these crewmembers with thereby become ineligible for Transportation Security Cards. Since 'detain on board' orders have been issued for some senior shipboard personnel, such as chief engineers, this may present practical problems for ship operation. The Card issuance program would, though, include provisions for waiver and for appeal.

Enhanced Crewmember Identification Crewmembers on vessels calling at U.S. ports will be required to carry and present on demand an identification credential acceptable to the U.S. Coast Guard.

It is anticipated that a mariner's identification card issued under standards being developed by the International Labour Organization (ILO) would meet this requirement.

Grants The maritime security grant program would be made permanent (subject, of course, to funding). Grants would be administered by the Maritime Administrator and available to port authorities, facility operators, and state and local agencies required to provide security services or funds to implement provisions of Area Maritime Security Plans or facility security plans. Costs that could be funded under these grants include conducting vulnerability assessments, acquiring and operating security equipment, and costs associated with correction of Coast Guard-identified security shortfalls. Funding levels for the grant program have not been resolved. While on-shore facility owners and operators have at least some hope that grant funds will offset the cost of mandated security upgrades, vessel owners and operators are again left holding the bag. The Act provides no grant monies for the costs of ship security upgrades. Container upgrades alone could cost hundreds of dollars per unit - and there are thousands and thousands of containers. Meanwhile, the failure of Congress to enact appropriations legislation has delayed funding of any new grants until at least April 2003.

Foreign Port Assessments The Secretary has been tasked with assessing the effectiveness of antiterrorism measures maintained at foreign ports from which vessels depart on voyages to the United States or that otherwise present a security risk to international maritime commerce. Factors to be considered in the assessment include screening and security measures in place at the port, licensing or certification of compliance with appropriate security standards (which would appear to mean standards developed by IMO). and the security management program of the port. If the Secretary finds that a foreign port does not maintain effective antiterrorism measures, the Secretary is to notify the country of the finding and recommend steps to improve the antiterrorism measures at the port.

Automatic Identification System The Coast Guard is authorized to require installation and operation of automatic identification systems (AIS) on self-propelled commercial vessels of 65 ft. (19.8 m) and longer, vessels carrying more than a specified number of passengers for hire, towing vessels of more than 26 ft. (7.9 m) and 600 hp, and any other vessel determined appropriate.

Container Performance Standards The Secretary, in consultation with the Transportation Security Oversight Board, is directed to establish a program to evaluate and certify secure systems of international intermodal transportation.

Government to ensure and validate compliance with the program; and any other measures the Secretary considers necessary.

The Secretary has also been tasked to develop an antiterrorism cargo identification, tracking.

and screening system for containerized cargo shipped to and from the United States.

See the discussion above regarding the cost of upgrading shipping containers, in the 'Grants' section.

Initially at least, one should expect a shortage of U n - certified containers, particularly in smaller foreign ports.

Civil Penalties Civil penalties of up to $25,000 can be imposed for violation of the maritime security statutes or regulations.

Expedited Rulemaking The Secretary is authorized to promulgate interim final regulations implementing the maritime security statutes without having to comply with the usual provisions of the Administrative Procedures Act. such as advance notice and comment. Final regulations, though, would have to meet the usual requirements.

What this means is that implementation will be greatly expedited, with minimal input from the regulated community. The result will be that any initial mistakes will not be caught and corrected before carriers and others will have to spend time, money, and personnel resources to comply.

Extension of Seaward Jurisdiction The Espionage Act of 1917 (which first established a port security program for the United States) has been amended to extend jurisdiction out to 12 n.m. from the baseline from which the U.S. territorial sea is measured.

A civil penalty of up to $25,000 could be imposed for violation of the Espionage Act or regulations promulgated thereunder.

Transmittal of Information to Customs Service The Customs Service is now authorized to require that information pertaining to cargo to be brought into the United States or to be sent from the United States be provided to the agency through an electronic data interchange system prior to the arrival or departure of the cargo. Carriers must notify the U.S. Customs Service of any cargo tendered to the carrier for transportation that is not properly documented and that has remained in the marine terminal for more than 48 hours after delivery.

Efforts to Enhance Maritime Security The United States will continue its efforts to increase transparency in control and ownership of vessels. It will also work to enhance maritime transportation security, particularly intermodal transportation. In this respect, it will be joined by the majority of the community of nations, although there will be differences in specific measures to be relied upon to achieve the goal.

One program that is causing discord is the Container Security Initiative (CSI) of the Customs Service. The European Commission contends that the program, under which U.S. Customs personnel are assigned to various foreign ports to assist in the pre-examination of containers bound for the United States, unfairly discriminates against smaller ports.

Conclusion We have experienced a flurry of activity from IMO.

the Congress, and the various federal agencies. More activity will follow as flag administrations implement IMO provisions and the federal agencies implement new legislative authority. Neither the industry nor the agencies yet know exactly how maritime security requirements will turn out. We are in a period of trial and experimentation. Agencies will make mistakes and need to re-adjust. Industry will encounter confusion and frustration. These conditions are normal during periods of rapid transition. Maritime security is truly a work in progress. The important thing, for now, is that everyone move in the same general direction.

The need to enhance maritime security was made painfully evident by the terrorist attack of September 6, 2002 on the French supertanker LIMBURG in Yemen.

Now, the goal is to enhance maritime security in a manner that maximizes the benefits while minimizing the costs. In the United States, the Coast Guard, Customs Service, and other agencies involved in the process should be looking to the maritime industry to assist in development of workable solutions. Many in the industry actively participated in the OPA 90 rulemaking process, and the system benefited greatly from that involvement. Similar participation is called for in this situation. The agencies will move ahead in their rulemaking programs with or without industry participation.

The rules, though, will be more efficient and impose lower costs if all affected by the programs are involved in the process. It is incumbent on government agencies to seek input from the regulated community.

It is equally vital for the maritime industry to quickly provide its assistance. The parties must not forget that we are dealing with national and international security and that we face a nameless and daring enemy. No one truly appreciated the extent to which the maritime and other sectors of the economy were at risk of terrorist or other non-conventional attacks prior to the horrific events of September 11, 2001. Once it became apparent that there were fringe groups willing and able to launch raids on previously immune targets, the goal became one of reducing the risk to which various important elements of the national and international economic infrastructure were exposed.

The maritime industry transports the vast majority of international commerce. This is particularly true for the United States, which seems to be the current primary target for terrorist activity. Thus, it is incumbent upon those involved in U.S. maritime commerce to enhance their security and reduce their vulnerability.

Threats, risks, and vulnerabilities are dynamic.

Reducing your risk to today's threat does not make you inviolate against tomorrow. You must continually improve your security programs to account for new plots and plans of Al Qaeda and other fringe groups.

As Thomas Jefferson is alleged to have said, "The price of liberty is eternal vigilance." 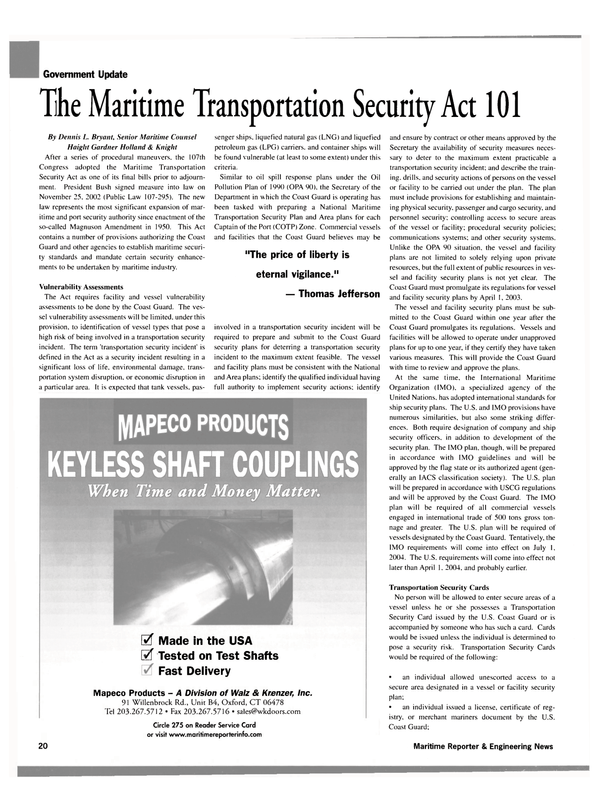