Southbury LES:"Outages are Not Acceptable"

If you are concerned about the effects of Satellite Communication service provider consolidation, you will like the Telenor/Comsat hook-up.

If you care nothing about corporate takeovers, rather are focused on ensuring the availability of a strong satellite communication signal, always, you will like the Telenor/Comsat hook-up.

In short, if you use satellite communications services, you will probably like and benefit from the Telenor/Comsat hook-up.

Hardly "news," the integration of Comsat into the Telenor family has been evolving for a year, the latest metamorphosis of Comsat, a pioneer in delivering satellite communications for the safety of ships at sea. Upon visiting recently with Guy White. Telenor's Southbury. Conn, station director, it is apparent that the combination is yielding positive and immediate benefits for the maritime community users.

From the beginning The Southbury Land Earth Station (LES) is. if nothing else, seated in one of the most picturesque spots in Connecticut, enhanced greatly by the fall foliage in late October. Contracted for construction on November 28, 1973, the LES began providing signals for the commercial mariner in 1976, with the launch of the Marisat satellites.

(Interestingly, one Hughes-built, Telenor-owned Marisat satellite is still in operation, making it the world's oldest operating commercial satellite. It is still piloted by Telenor from Bethesda, Md..

and as a back-up. from Southbury. Conn.

It is the Southbury LES' scenic locale that made it a natural for the LES, though not for aesthetics alone. As White explained, topography is the key "We, for the lack of a better term, sit in a bowl, which effectively shields the station from interference from terrestrial microwave towers ... and there are a lot of terrestrial microwave towers." Plus, he points out the location's good circuit connections to both New York and Boston as an advantage. In addition, the LES has an almost personal source of power, as it is connected directly to the nearby Shepauge Dam's hydroelectric plant (both dam and plant are Connecticut's largest), which is powered by the waters of the Housatonic River.

This provides a reliable, clean source of power, with White emphasizing 'reliable.' "We double up on everything around here ... outages are not acceptable." While some would dismiss this as perhaps marketing hype, coming from White, a 23-year employee of the station with the technical knowledge to fix any- thing on premises, it is undeniably true.

"We take safety at sea very seriously," he said. Factor in, also that the LES provides the communication links to Air Force One and the space shuttles, and the magnitude of reliable service is clear. "I never want to get a call from Kennedy Space Station and hear that a shuttle launch was aborted because of us." While the station's five massive dishes (four active, one back-up) provide 95 percent of the station's visual impact from the outside, the guts of the operation and the roughly $150 million worth of equipment housed in the technical shed is a real eye-opener.

A veritable smorgasbord of communication technology from the "stone age" Telex to the station's new No. 7 signaling switch — which handles the equivalent of 180 T1 lines — are housed here.

The new signaling equipment, White said, is proof of Telenor's commitment to reliable communication and the Southbury Station. According to White, the new No. 7 switch, which takes full advantage of the latest technology to deliver expanded communication capacity in a condensed size, provides more flexibility, capability and is a move toward a "self-healing network" concept.

Another major upgrade complements of the new parent company is a brand new Uninteruptable Power Supply (UPS), a major enhancement for the Southbury LES and a virtual guarantee that a power problem will not take the station offline.

With the high commitment to the latest communication and computing gear, it is ironic to note that the station uses — in addition to computerized and electronic means — Morse Code as part of its warning system to alert staff engineers to problems.

Telenor's acquisition of Comsat followed an interesting period to Comsat, as less than a year previous it had been acquired — evidently, for quick resale — by Lockheed Martin. Despite an incredible number of corporate consolidations and takeovers in corporations around the world — some justified, some mystifying — this collaboration, by all appearances, will continue to be a rousing success. Before the acquisition, "Comsat and Telenor technical voices usually teamed and were always the loudest," at^Inmarsat meetings in London, said White. "Telenor is very clever," he said, noting how the company was a pioneer in integrating GSM cellular sites at sea so cellular phone users out of range can "roam" through the satellite. "We (Comsat) brought to the equation software knowledge and switching capability — we build things here off the shelf." 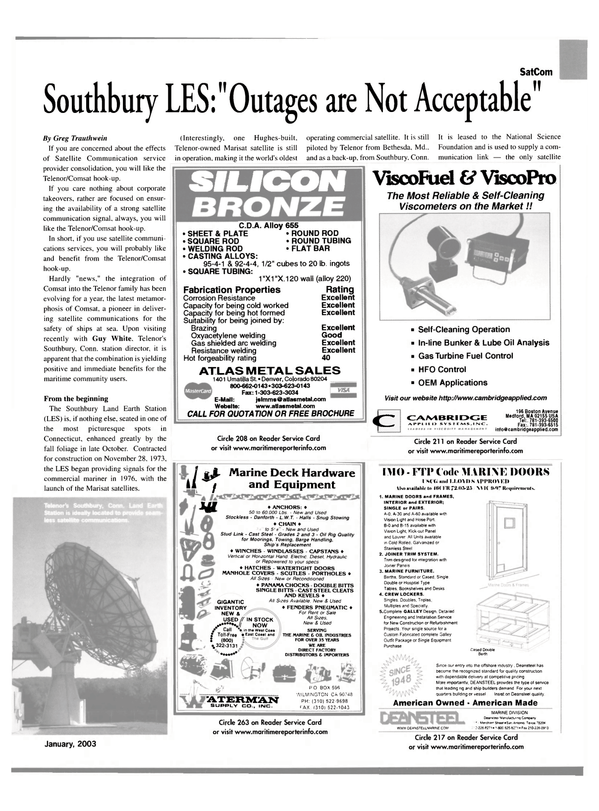 Read Southbury LES:"Outages are Not Acceptable" in Pdf, Flash or Html5 edition of January 2003 Maritime Reporter