The expansion of fast ferry building facilities has taken another gigantic step on the U.S. East Coast. In concert with a beehive of new capacity construction down south, Derecktor Shipyards recently announced that it has completed construction on a 45,000 sq. ft. main assembly building at its facility in Bridgeport, Conn., marking the completion of the second building on this 23- acre site, which is part of the development of the Bridgeport Regional Maritime Complex in Bridgeport Harbor. The new main assembly building consists of one 300 x 100 x 75 ft.

Other significant developments at the Bridgeport site include completing the retrofit of a 56,000 sq. ft. metal fabrication and sub assembly building in July of 2001, and waterfront improvements, scheduled for completion in September of 2003, which include 570 lineal ft. of bulkhead dredged to a depth of 18 ft.

The Bridgeport facility is being designed and constructed as a modern, state-of-the-art manufacturing and service facility. Manufacturing facilities will include construction of a total of 290,000 sq. ft. of new buildings, including complete metal working shops with an on-site CNC plasma cutting operation.

The site has a p p r o x i m a t e l y 1,250 lineal ft. of protected deepwater frontage. On completion of the project, the frontage will include 500 ft. on the Harbor Channel with a channel depth of 35 ft. and 750 ft. of fully protected frontage on the Yellow Mill Channel with a permitted depth of 18 feet.

Launching and retrieving of vessels will be accomplished using a 700-ton travel lift. A 2,500-ton dry dock facility for larger vessels is planned for the near future. The shipyard is expected to employ up to 250 persons when fully operational.

Currently under construction is the first of two 239-ft. (72.8-m) high-speed vehicle-ferries being built for the Alaska Marine Highway System. The first ferry is slated for delivery in December 2003.

Preparations for building the second ferry are underway with a scheduled delivery of December 2004.

In addition to this new yard in Connecticut. Derecktor has two other facilities: Derecktor Shipyards in Mamaroneck, New York, is a full service yard for both yachts and commercial vessels, and Derecktor of Florida, a 17 acre yacht repair and refit yard in Fort Lauderdale, Fla. Among the significant factors in the success of the vessels built by Derecktor are the very high standard of aluminum fabrication and machinery installations as well as the weight conscious approach to vessel construction. 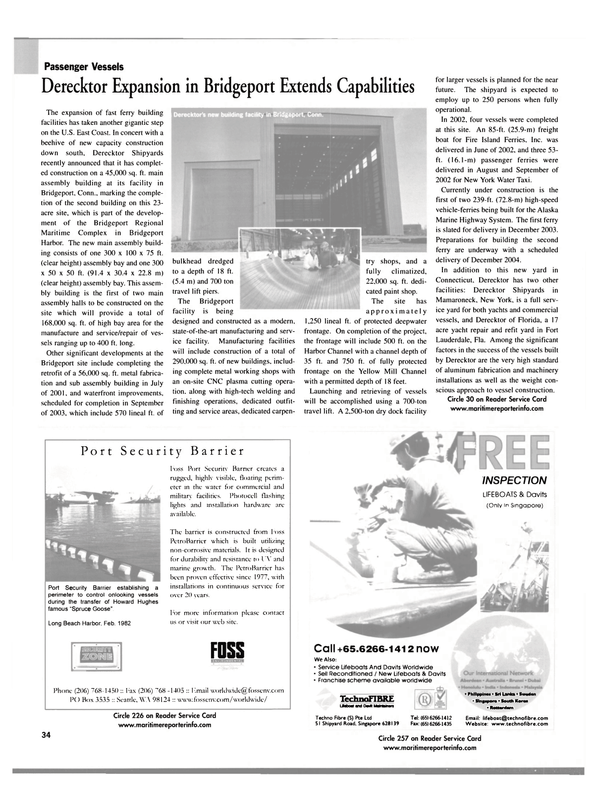