Conrad Industries emerged as the winner to build a new ferry for the high profile customers Alaska Marine Highway. AMH sees the signing as the ushering in of a new era in marine transportation for the community of Metlakatla with the signing of the contract. The new vessel will provide dedicated service between Metlakatla and Ketchikan, two of the Inside Passage's southernmost communities.

Southeast Region Director. Bob Doll, represented the Alaska Department of Transportation & Public Facilities at the signing ceremony. "This ferry means better service to the communities of Metlakatla and Ketchikan and less cost to the State of Alaska." The detailed design for the Metlakatla ferry was performed by Pat Eberhardt, PE. of Coastwise Engineering, Juneau under contract to the State of Alaska. Modeled after a North Sea supply vessel, it is designed to operate the 16 nm run between Ketchikan and Metlakatla in sea state 6 conditions, 13 to 20 ft. waves and winds in excess of 30 knots. Its rugged, open deck design will allow operation more than 95 percent of the time, with a normal operating speed of between 12 and 14 knots. At 181 ft. (55.1 m) the new Metlakatla ferry will be able to transport 149 passengers and 18 vehicles. 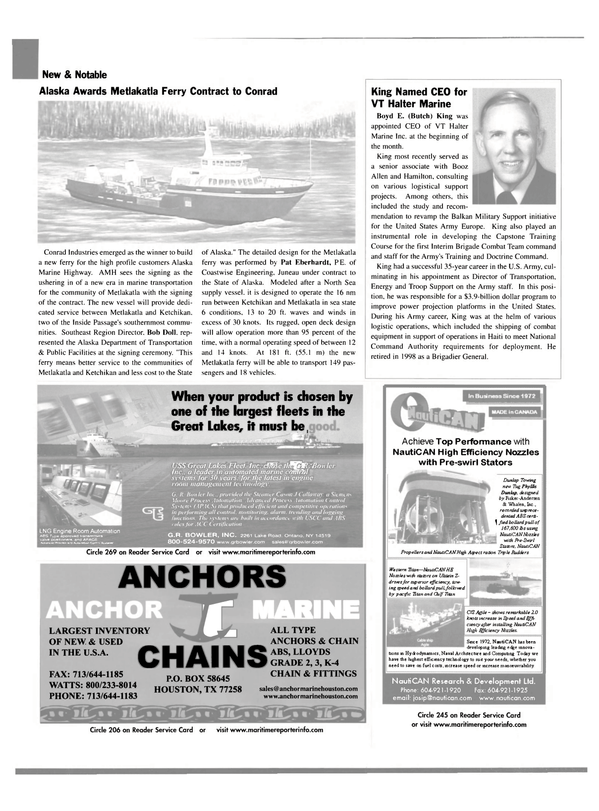