But as coastal patrol needs grow, so too do the military applications for these amazing breeds. Follow ing is a brief review of some of the recent news from Down Under.

INCAT Hobart-based shipbuilder Incat is emerging from a challenging year with news of not one, but two orders for the United States military. Just three weeks after the U.S. Army Tank-Automotive and Armaments Command (TACOM) announced the lease of their first Theater Support for the Army from Bollinger/Incat USA. Military Sealift Command (MSC), Washington. D.C..

also announced a contract for a 322-ft.

From its inception, Incat has constructed more than 50 vessels of varying lengths. The company's first passenger/ vehicle ferry was delivered in 1990.

a 243-ft. (74-rn) Wave Piercing Catamaran with a maximum deadweight capacity of 200 tons. The more recent 98 m Evolution 10B range has a dwt four times that amount.

Incat's shipbuilding activity is conducted from a modern facility with more than 32.000 sq. m. under cover, located at Hobart's Prince of Wales Bay.

under cover building hall was commissioned.

From a military perspective, the Incat built HMAS Jervis Bay (hull 045). commissioned into the Royal Australian Navy in May 1999 for two years to operate between Darwin and East Timor, highlighted to the world how high-speed, light, multihull craft can be utilized for military purposes.

In 2001 and in response to interest from U.S. forces in high-speed craft Incat, via its United States affiliate Incat USA, formed a strategic alliance with an American Shipyard to market and build for the U.S. military and commercial markets. Impressed with what they saw in HMAS Jervis Bay, the U.S. Military followed suit with Incat's 315-ft. (96-m) Wave Piercing Sealift Catamaran HSVXI Joint Venture (hull 050).

Speaking of Joint Venture's performance in a sealift role, U.S. Navy Admiral Robert Natter. Commander-in-Chief of the Atlantic Fleet, said recent fleet exercises had revealed the craft's military potential. "I think there are all kinds of applications for this kind of a highspeed.

In addition to sealift. Admiral Natter believes the catamarans could be used for inserting special operations forces along coastal waters, as well as to perform surveillance and command and control missions. He also singled out the vessel's potential for mine warfare.

"I'm convinced, based on our experi- ments thus far. that with a little different approach to dedicated mine warfare, that something like a high-speed vessel — and I don't care whether it's the HSV that we are leasing or something like that - is the answer." Admiral Natter said. "I can make it work. Somebody's got to let me buy this thing." Spearhead Spearhead is the U.S. Army's first Theater Support Vessel (TSV) and is part of the Advanced Concept Technology Demonstrator (ACTD) program by the Office of the Secretary of Defense and the U.S. Army. The vessel will be used to demonstrate and evaluate its ability to perform during certain mission scenarios, assess its usefulness to the U.S. military and refine the requirements for the next generation of army watercraft. The TSV is critical to the Army's ability to perform its Title 10, intra-theater mission. Spearhead will be utilized on missions to maximize its speed and flexibility and is needed for both sustainment deliveries and the movement of Army prepositioned stocks, and troop units.

TSVs promise to change the way the U.S. Army gets to the fight. They will allow the Army to quickly deliver intact packages of combat-ready soldiers and leaders with their equipment and supplies, enabling them to "fight off the ramp" if necessary. Delivering intact units within a theater also will reduce the need for a large-scale on-shore reception, staging, onward movement and integration of soldiers, vehicles and equipment within the battle space. Just three weeks after the awarding of the contract for Spearhead came another, separate, order from the U.S. military.

The craft, HSV-X2 (hull 061) is currently under construction at the Hobart.

Tasmania shipyard with delivery to Ingleside. Texas scheduled for June.

the vessel is expected to serve as an interim replacement for the U.S.

Navy Mine Countermeasure support ship Inchon. The craft will also serve as a platform to conduct a series of limited objective experiments. exercises, demonstrations and training events determined by the Navy Warfare Development Command and the Marine Corps Combat Development Command." The ship will be capable of maintaining an average speed of 35 knots or greater, loaded with 500 short tons, consisting of 350 personnel and military equipment. A minimum operating range of 1.100 n.m. at 35 knots, is required by the contract, as is a minimum transit range of 4.000 nautical miles at an average speed of 20 knots. Furthermore, she must be capable of 24-hour operations at slow speeds (3-10 knots) for small boat and helicopter operations. Development work on the exciting 367-ft. (112-m) Evolution one 12 RoPax catamaran continues.

Boasting an operating dwt of 1.000 tons, the Evolution one 12 will operate at speeds of 40 knots, or 45 knots with 500 tons dwt. An additional bonus to operators is the ability to increase deadweight to 1.500 tons in which state the craft will operate with cargo at medium speed of approximately 23 knots.

The vehicle deck provides 589 truck lane meters plus 50 cars, or 312 cars in a full tourist mode. With extra optional mezzanine decks fitted the possibility for even greater car capacity exists.

Increased vehicle deck headroom of 6.3 m at the center lanes and 5.9 m outboard.

under the raised mezzanine decks, will allow the stowage of double stacked containers or MAFI trailers.

With a beam of 99 ft. (30.2 m). heavy road vehicles such as B-Double trucks and semi-trailers can easily turn in the bow for quick disembarkation over stern ramps. The innovative passenger cabin layout for up to 1.000 persons with panoramic window layout further improves the traveling experience.

The wide beam also serves to increase passenger comfort by reducing transverse accelerations in the main cabin area. Combined with a new wider trim tab configuration, these will minimize the time the active forward T-foil is required, bringing further fuel and maintenance economies to the operator. The Evolution one 12 is the optimum highspeed RoPax for today's demanding requirements. 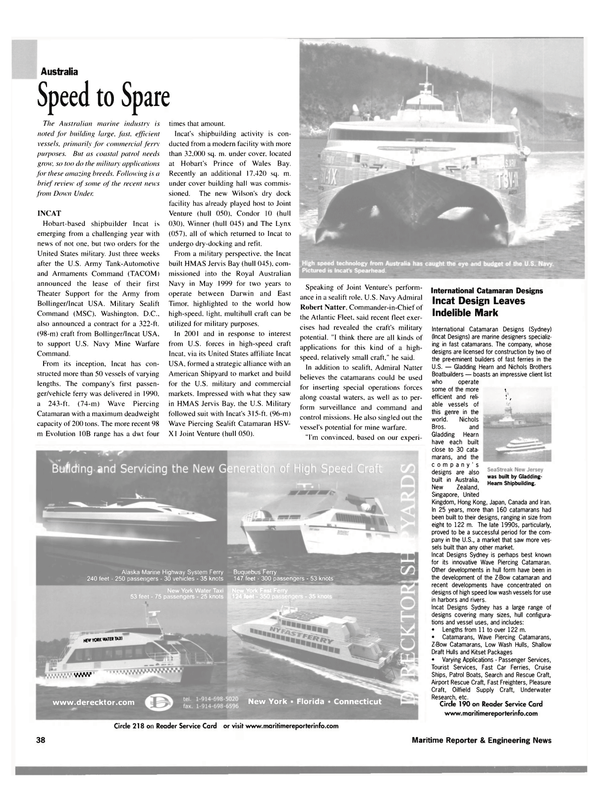