Careful, Your Species May Be Non-Indigenous

Dangers posed by movement of species from one part of the world to another where they are uncommon (nonindigenous) have been recognized since the black death (bubonic plague) arrived in western Europe from central Asia in the I300's, killing up to one-third of Europe's population. Modern medicine has been able to address most disease outbreaks, as evidenced by our recent experience with SARS (severe acute respiratory syndrome). The environment has coped less successfully.

Since man began traveling long distances in relatively short time, plants and animals have also made the voyage.

Some have been brought intentionally, as when European domestic animals and crops were transported to America and Australia for farming. Others, such as rats, were brought unintentionally.

Regardless of why these non-indigenous species have reached a new environment.

the result may be disastrous for the native species.

Modern large ships present a particular environmental problem in this regard, as they are both fast and carry large volumes of water when in ballast. This ballast water is commonly taken onboard when the vessel unloads its cargo in one port and discharged into local waters when the vessel is preparing to load a new cargo. As the distance between the two ports increases, the chances increase that plant and animal life in the ballast water will not be native to the waters where the ballast is discharged.

But, when those few non-indigenous species that do survive find a foothold, an ecological disaster is possible.

The Origin of the Species It is believed that zebra mussels were transported in ballast water by ships sailing from ports in the Black Sea to the Great Lakes of North America in the early 1980s. Infestations of zebra mussels were not noticed until about 1988, when they started clogging water intake pipes. Zebra mussels are such successful breeders and prodigious eaters and have so few natural enemies in their new environment that they tend to crowd out native species. Damages resulting from the spread of zebra mussels in North American waters and resultant control expenses are estimated to cost $500 million annually.

While zebra mussels are the best known of the non-indigenous aquatic species, they are by no means alone.

The European Green Crab, now found on both coasts of North America, is a voracious predator that feeds on bivalve mollusks and small crustaceans. The Chinese Mitten Crab (which may have been introduced illegally as a food source) has spread through the San Francisco Bay region, burrowing into and weakening dikes and levees, as well as competing with local species. A recent study indicates that between six and 25 percent of the different species of plants and animals found in coastal waters of California may be non-indigenous.

For many of these, it is too early to determine whether they will have deleterious impacts on the local bios- phere. Other vectors for non-indigenous species to reach new environments range from intentional introduction (as when the Brown trout was brought to North America from Germany in the I880's) to the unintentional (as when Caulerpa taxifolia. an exotic seaweed, was introduced into San Diego Bay by the emptying of aquariums). Recently.

the state of Virginia proposed to import Asian oysters to plant in the Chesapeake Bay in an attempt to counteract the massive decline in domestic oysters.

In an effort to slow the spread of aquatic non-indigenous species, ballast water management programs have been introduced. One of the first was mandated for ships entering the Great Lakes from outside North America. These ships are required to demonstrate that they have exchanged their ballast water on the high seas while en route. High seas ballast water exchange remains the most widely accepted and widely utilized of the control techniques. This is true despite its downsides. Disposal of ballast water on the high seas may expose the ship to stability risks, particularly in heavy weather. Even the best current ballast water pumping systems do not fully empty the ballast tanks, leaving some water and sediment (along with the potential for non-indigenous critters) in the tanks when they are refilled. Some ships transit exclusively in coastal or shallow-water areas where ballast water exchange may provide minimal value. Australia has introduced a ballast water management program that includes a risk analysis to determine the likelihood that a ship's ballast water might contain harmful non-indigenous species.

Ballast Water and Other Guidelines To reduce the probability that ballast water would contain significant numbers of non-indigenous species, the International Maritime Organization (IMO) established a set of voluntary guidelines. These include cautions against uptake of ballast water in very shallow water or in darkness when bottom- dwelling organisms may rise up the water column. These guidelines have been adopted by the U.S. Coast Guard (and have been made mandatory by the State of California).

In the U.S., various state governments have taken their own approach.

California made the complete U.S. Coast Guard voluntary program mandatory, including the guidelines, which no one knows how to enforce. Washington.

Oregon, and Hawaii largely adopted the program that is in effect on the Great Lakes. Hawaii, though, also adopted a program intended to control non-indigenous species that might attach themselves to the hulls of ships. As with the California approach to guidelines, no one knows how to enforce this particular provision.

The Port of Oakland, under prodding from the U.S. Environmental Protection Agency (EPA) adopted a ballast water program that is separate and distinct from the one adopted by the State of California. To many, this port-specific requirement is perceived as little more than duplicative reporting, with no measurable increase in environmental protection.

It is clear that ballast water management has moved from a vague concept to specific guidelines and now to mandatory requirements in rapid succession.

Unfortunately, the technology has not kept pace. Ships are still relying largely on the antiquated method of ballast water exchange, with all its shortcomings and hazards. A few ships have tried experimental techniques, but none have been approved by flag or port states. Thus, these vanguard ships run the risk of having to rip out expensive equipment if the various governments refuse to 'grandfather' them at some future date. It is hoped that effective innovative technology is developed and approved in the near future and that pioneering ships are granted appropriate relief for leading the way. 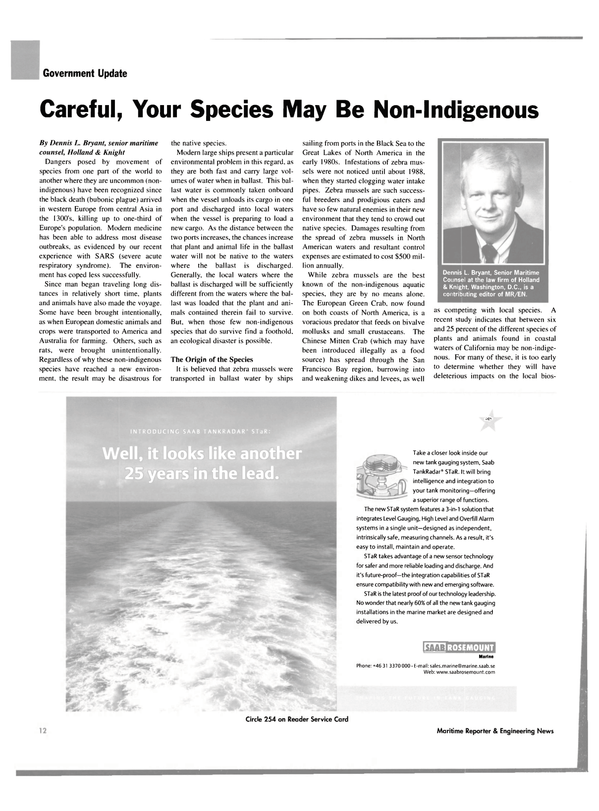 Read Careful, Your Species May Be Non-Indigenous in Pdf, Flash or Html5 edition of September 2003 Maritime Reporter