The most recent addition to Royal Caribbean's (RCCL) tleet of vessels is the 90,090-gt Serenade of the Seas, which was delivered to the cruise line by Meyer Werft Shipyard in Papenburg, Germany on July 30, 2003. The third member of the Radiance-class fleet, Serenade, along with its sisterships, is a luxury cruise vessel boasting a very slim, yachtlike design with extensive use of glass on the outside, as more than 80 percent of the vessel's cabins are designated as outside cabins.

Serenade features advanced technology designed to make the ship efficient, and to ensure it is as quiet and vibration free as possible. To this end. it features an advanced gas turbine propulsion plant, and its 15 decks employ the latest technology.

Following Serenade's delivery, the vessel sailed from Amsterdam to Boston, Mass. on August 4, 2003 continuing on to New York City where it was christened there by actress Whoopi Goldberg, who was Serenade's godmother on the evening of August 22, 2003.

The vessel was scheduled to commence its fall itinerary with destinations of Canada/New England before repositioning to San Juan for its winter schedule in November 2003.

The ship, which had made its way down the East Coast from Boston, was on display in the port prior to its christening.

With Capt. Nikolaos ("Nick") Antalis as Serenade's master, the vessel will be in good hands due to Antalis' breadth of experience and strong following among RCCL passengers. Since joining RCCL more than eight years ago. Capt. Antalis had spent the last four years as master of Vision of the Seas, and had previously served as master aboard various ships on Royal Cruise Line and Regency Cruise Line. But what prepared him for his current positions, Antalis says, is the 10 years he spent aboard cargo ships. "You build seamanship on cargo ships," he said.

Capt. Antalis moved cargo for a variety of companies during those years.

mostly on the NY to Japan and NY to Europe routes.

New Equipment The ship features a total of 1,055 passenger cabins divided into 238 inside cabins and 818 outside cabins including one Royal Suite, six Owner's Suites and 17 Balcony Suites. In addition. Serenade also has 14 cabins for passengers with disabilities.

Generous on space, the cabins are equipped to meet the requirements of handicapped persons.

Divided into seven fire zones, the ship complies with the rules for a two compartment vessel and is designed as per the latest IMO regulations. The vessel holds four tenders. 14 lifeboats and two fast rescue boats. In addition, it is also equipped with two "Marine Evacuation Systems," which enable a fast evacuation via chutes onto the liferafts.

The ship is fitted with an Integrated Bridge System (IBS) by Litton Marine that includes all components required to ensure safe navigation. The main feature of the Bridge is the Voyage Management System, which allows radar display and the electronic sea chart to be laid one above the other.

Serenade's optimum maneuverability is provided by two azipods (with an output of 20,000 kW each) and three bow thrusters, all operated by joystick control. 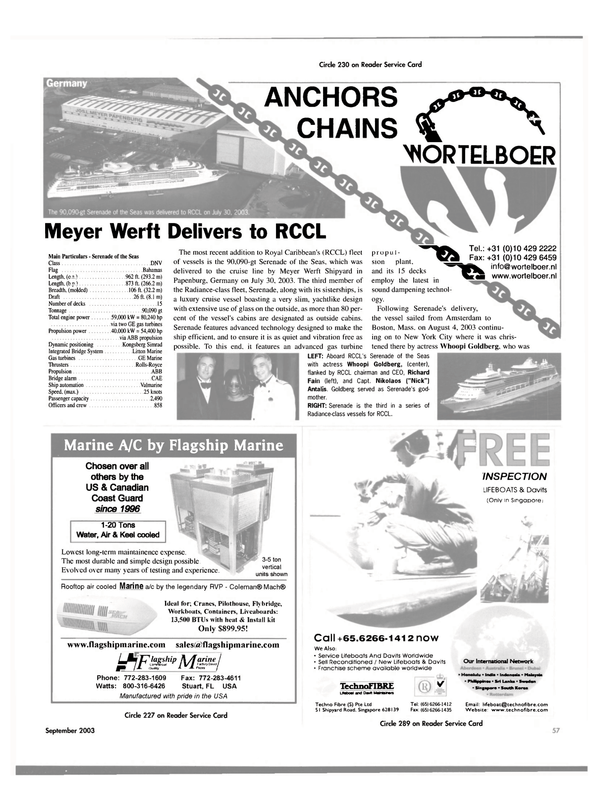