Two Bollinger shipyards teamed to increase the dredging depth of the Pine Bluff Sand and Gravel Co. dustpan dredge, Wallace McGeorge, from 62- (18.8-) to 75 ft. (22.8 m), enabling it to dredge at higher river stages and dispatch sooner on a falling river.

(12.1- x 4.5- 9.1-m), A-frame that it had pre-fabricated for the dredge. The Aframe, which more closely resembles an inverted "U", is used to accommodate a new "ladder" that was fabricated at Bollinger Gulf Repair, New Orleans and installed at Bollinger Quick Repair. An EMD 20-645-E4-diesel engine powers the pumping and suction systems and the boat's propulsion is supplied by two Caterpillar 3516 diesels driving through Ulstein Z-drive units. Ducote Engineering Associates, Inc. of Jefferson, La. provided design and engineering services for the project.

The Wallace McGeorge is under contract with the U. S. Army Corps of Engineers (USACE), Memphis District, to help maintain Mississippi River deep draft crossings between Baton Rouge and the Gulf of Mexico. According to Mark Lemoine of Pine Bluffs Alexandria, La. office, Brown and Root built the Wallace McGeorge. whose original name was Carl Burkhardt, in 1965 as a cutter-head dredge. Around 1980, it was converted to a dustpan dredge and renamed Lenel Bean by Bean Dredging, who had acquired the vessel. In 1991, Pine Bluff bought the vessel and later renamed it Wallace McGeorge. 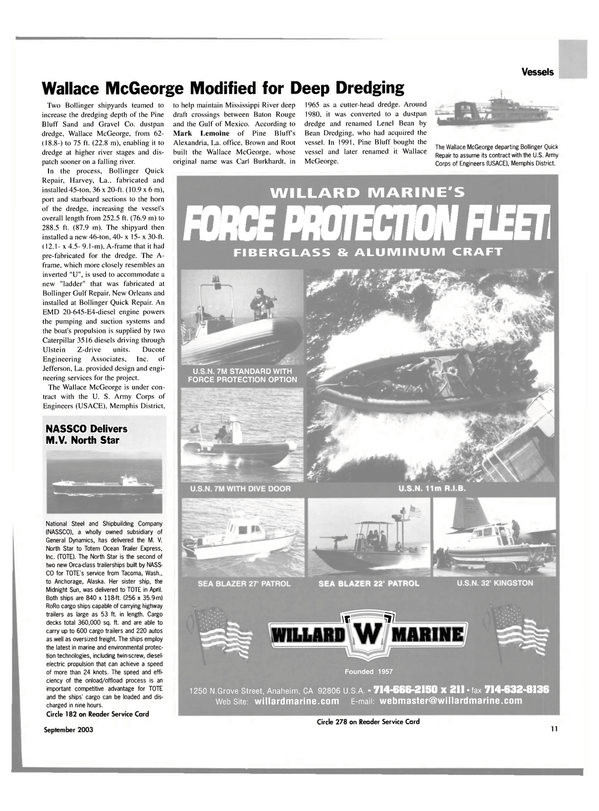