At the same time, AMSC has begun fabrication of a prototype for a 10- MVAR SuperVAR dynamic synchronous condenser (DSC) ordered by the Tennessee Valley Authority (TVA).

The SuperVAR machines are similar to 10-MW 1,800-rpm generators, and thus the production of these TVA machines is setting the stage for the future commercialization of HTS generators, both in marine and land-based applications.

Like their motor cousins, HTS generators are smaller, lighter, and more efficient than conventional generators.

For example, a 36-MW marine generator and its support equipment will weigh about 40 tons and will measure less than 6.5 ft. (2 m) in diameter and less than 13 ft. (4 m) in length overall.

Coupled with a GE LM 6000 or Rolls Royce MT-30 gas turbine (GT) at about 22 tons, a combined GT generator set will weigh only slightly more than 60 tons. These lighter and compact GT generator sets can now be located in a ship's superstructure, thereby minimizing the space requirements for the engine room and GT ducting.

Brian Ackerman, a marine propulsion consultant, recently evaluated this concept. He studied nine different diesel-direct drive container ships for the impact of a deckhouse GT generator set electric drive using conventional (and not HTS) generators. He estimated that the GT deckhouse system would make room for 4-16.4 percent more containers in the nearly vacant engine room, depending on the size of the ships.

Ackerman further estimated that the added revenue from the container increase would pay back the greater first cost of the GT electric-drive and it's more expensive fuel in an average of 2.7 years, again depending on the specific ship. Ackerman noted that conventional generators control the weight of the GT generator sets and sometimes lead to arrangement problems at the higher ratings.

With HTS generators, such difficulties will be ameliorated. 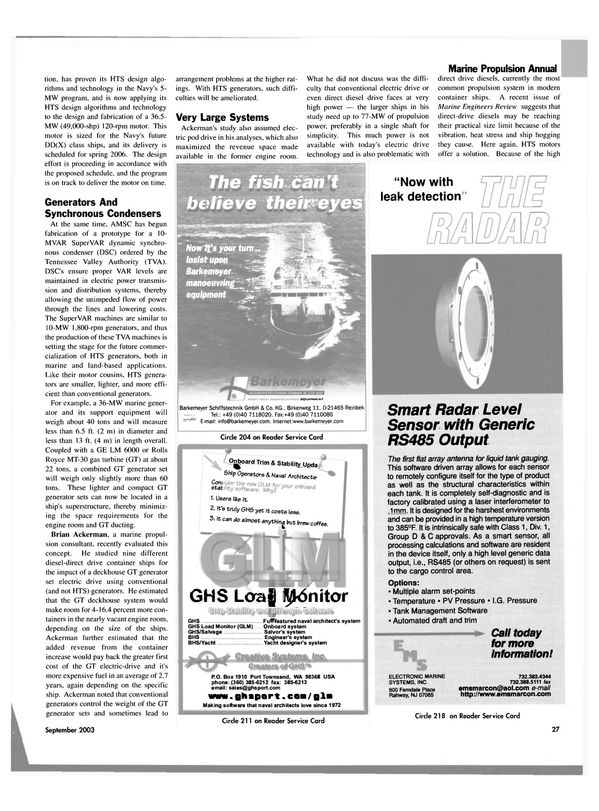