The Chairman's Influence on Design

One of the most enduring business relationships has been reinforced by the Evergreen Group's decision to entrust construction of an extensive new series of post-Panamax containerships to Mitsubishi Heavy Industries.

The project is distinguished not only by its scale, in calling for 10 S-class newbuilds of 6,724-TEU to be delivered between September 2005 and the end of 2007, but also by the adoption of the 'Greenship' design concept proposed by Evergreen chairman Dr. Chang Yung-Fa. Through its special attention to pollution prevention, the 'Greenship' approach calls for fuel oil storage to be protectively located within the athwartship bulkheads dividing the cargo holds. "We don't want fuel oil tanks to be located at the sides and at the bottom of the ships." commented Dr. Chang.

"If fuel oil tanks are located inside the hulls along the transverse bulkhead, damage to tanks and oil leakage incidents caused by grounding and collisions can be dramatically reduced," he added.

The new generation of 984-ft. (300- m) S-type vessels will become the largest ships in the Evergreen-owned fleet, stowing 15-wide rows of containers in the holds and carrying deck stacks in 17 rows. Promising a service speed of 25.3-knots from a 74.700-bhp Sulzer 10RTA96C engine to be produced by Mitsubishi under license, the series will be well-suited to the group's express liner operations between the Far East and Europe.

Evergreen's design move in eschewing the conventional practice of carrying heavy fuel oil for the main engine in the double bottom or hull sides gives added momentum to the industry's re-think of such arrangements in large containerships.

Recent months have seen the introduction into service of the first vessels in Mitsui OSK Lines program of Panamax containership newbuilds. in which the internal structure has similarly been used to provide bunker capacity.

The policy applied in eight vessels of around 4,600-TEU has meant that at least 50-percent of each vessel's total fuel capacity, sufficient for a 10.000- mile voyage, has been transferred from the double bottom to transverse bulkheads.

Mitsubishi was assigned four of the new. 25-knot MOL class, while the other quartet was placed with IHI Marine United. 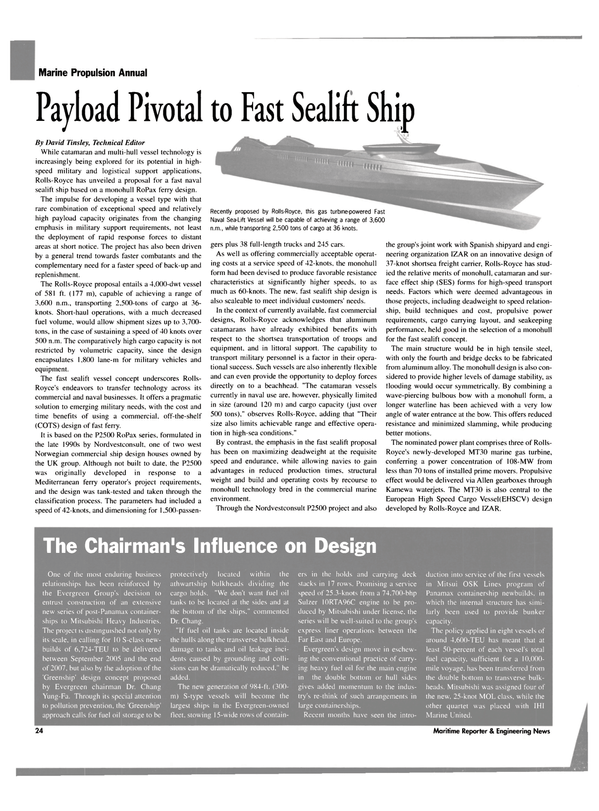 Read The Chairman's Influence on Design in Pdf, Flash or Html5 edition of September 2003 Maritime Reporter