A Change in Course

News from BP, the world's largest oil company, that it plans to have "close control" over 50 percent of its tonnage by 2005 may bring a wry smile to more than a few old timers. It was not very long ago at all that oil majors were systematically divesting themselves of vessels that, they said, tied up capital unnecessarily and were not a part of their core business. At the time, they contended that they could rely on others to provide maritime transport more cheaply.

Has the wheel turned full circle? Last month BP's CFO Byron Grote revealed impressive results - BP's second quarter profit was $3.1 million, up 42 percent year on year while its first half figures, at $6.8 billion, were up 81 percent. But he also affirmed that the company intends to control more of its own tonnage, either by owning or time-chartering it.

In his speech entitled "Prestige - A Charterer's Reaction" which Captain Noel G. Hart, Manager, BP Shipping (USA) presented at an INTERTANKO meeting in April and was published, in part, in the June 2003 edition of this publication. Hart said: "Some of you would be aware BP is currently in the midst of expanding its fleet - we have nearly a dozen ships delivering this year alone. Have you asked yourselves why we are doing this?

I will save you the question — we are doing it to be less dependent on a spot market that continues to disappoint — remember the figure I quoted before — only half the ships we could use, we can use. And so our assurance strategy — which was embryonic at the time of the Erika incident, and which matured in the 12 months following, has determined a path for us across a broad range of our marine activities, but one more visible feature was to increase our capacity to move our own cargoes." Hart pointed to some sobering statistics that were used, in part, to formulate the plan: "BP inspects 2,200 tankers/year, utilizes about 1,000 SIRE reports, handles over 25.000 internal vetting enquiries/year and audits about 30 ship owners/year. There are over 12,000 tankers in our data base — we have a potential business interest to charter around 5,000 of those — the others are coasters, or committed into various closed trades not available for spot use and so on, yet we only approve of around 2,500 tankers. Half the fleet that we would want to charter is unacceptable to us. Even with the half that is acceptable, many will still fail an initial inspection." A Look Back Back in the 1960s and early 1970s, oil companies owned a greater proportion of tonnage themselves than at any time since. Then they had another chunk on long-term timecharter, other vessels on medium term deals, and relied on the spot market only for unforeseen requirements.

Then came the age of the tanker independent and when the tanker market crashed, it was better for oil companies to charter in large volumes of third-party tonnage at loss-making rates than continue to run their own high-cost shipping operations along traditional lines.

Now, in the wake of a number of highprofile tanker casualties but particularly the Prestige, the strategic risk associated with shipping activities, which are an essential part of any oil major's global logistics chain, is viewed completely different. Deep-pocketed oil companies simply cannot afford to risk overreliance on independent tonnage, particularly in a tight market where goodquality ships are hard to find. Analysts believe that in certain sectors of the tanker market, such circumstances are now inevitable in the light of the faster phase-out of single hulled tonnage in the months ahead. Just look at the scale of the lawsuits bouncing backwards and forwards across the Atlantic between the Spanish Government and the American Bureau of Shipping. No major corporate, forced to take whatever tonnage it can get in a tight market, would want to find itself having to charter tonnage that it knew was marginal. In practice, no oil major probably would, but then that poses a risk to the company's other fields of operation. 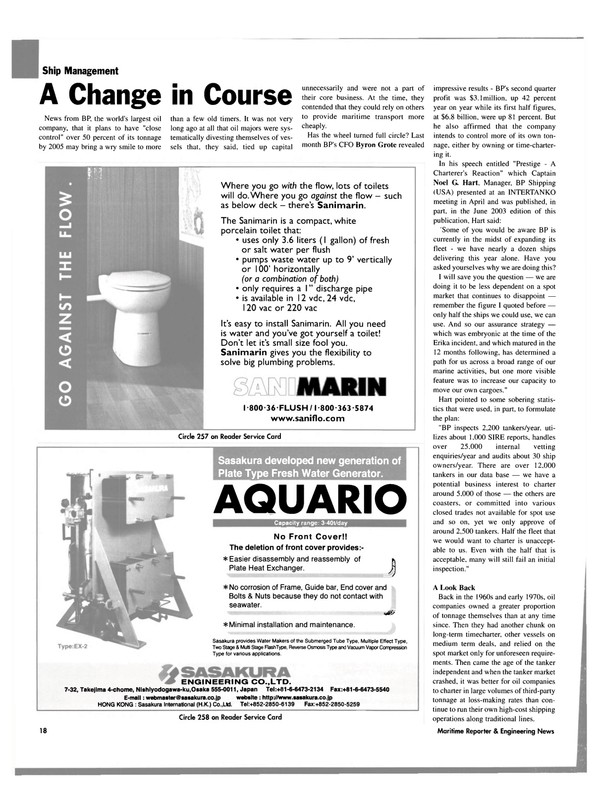 Read A Change in Course in Pdf, Flash or Html5 edition of September 2003 Maritime Reporter