"Ink" It In: WMTC a Must for Maritime Professionals

Mirroring the metamorphosis of the globalization of the marine industry and seeking to stake a leadership claim atop the marine technology information heap, the World Maritime Technology Conference & Exposition will bring together the world, both literally and figuratively, in San Francisco in late October. Set in historic San Francisco and scheduled for October 17-20. this meeting is being hosted by the Society of Naval Architects and Marine Engineers (SNAME) but as the "World" in its title belies, includes participation from around the globe, tapping the expertise of professional marine technical organizations from 11 countries.

"This is the largest assembly of 'who's who' in naval architecture, marine engineering and ship production that we have ever had," said Admiral Robert E. Kramek. (USCG retired), President and COO. ABS Americas, and co-chairman of the conference's technical committee, with Dr. Henry S. Marcus.

Professor of Marine Systems in the Ocean Engineering Department at the Massachusetts Institute of Technology.

The conference is designed to make itself relevant to a broad spectrum of the modern maritime industry, as hundreds of papers on nearly every topic are set for discussion in San Francisco. "From the perspective in someone interested in design, construction and operation, there is nothing like this in the U.S.." said Dr.

Marcus. "There has been nothing like this." The conference papers are divided into four major categories: • Ship Operations (major security, safety, quality); • Design & Technology (major emphasis on innovative naval design and commercial projects); • Ship Production (there will be 29 papers with views on Ship Production from U.S. and International Yards); and • The role of Marine Technical Societies in Meeting Industry Challenges in the New Global Economy (categorical papers on risk assessment and a very healthy Offshore Design sector).

(A full, updated listing of the conference schedule will be available on www.worldmaritimetechnology.

A Meeting of Minds The World Maritime Technology Conference is planned to be a regular event, held every other or every third year (SNAME, it should be noted, will continue to hold its Annual Meeting and Exposition). Admiral Kramek explained: "There isn't a major ship built in the world today that does not include the U.S., Europe and Asia. We find ourselves cooperating globally like never before, but we've never gotten together like this before. There is a cry (from the major maritime organizations and flag states) for more standardized cooperation and rules, and this conference is a big step in that direction." He described the U.S. as "host" of the inaugural event, and envisions a travel- Circle 2 1 5 on Reader Service Card ing conference hosted by fellow naval architecture and marine engineering technical societies in subsequent years around the world. Supporting its international feel is not only a roster of technical presentations from around the globe, but two noted maritime leaders fulfilling highly visible speaking roles: William O'Neil, Secretary General of the International Maritime Organization will serve as the keynote speaker, while Choo Chiau Beng, Chairman and CEO of Keppel FELS, is the (invited) featured banquet speaker.

The process of building ships today, particularly large offshore structures is indeed an international venture, with a vessel designed in the U.S. built in Korea and outfitted in Europe, for example. "Look at the last 20 years," said Dr. Marcus. We have evolved from an environment where class societies, shipyards and countries must compete tooth and nail, to one with a changed attitude, where cooperation and information sharing is more common.

Admiral Kramek concurred, noting for example that Keppel FELS is "like the United Nations of shipyards," with 18 facilities around the world, including AmFels in Brownsville. "We're starting to see something new; shipyards in one country are cooperating with shipyards in another to improve quality." He singled out Kvaerner Philadelphia as a shining example, as it evolved from a shuttered naval facility to one of the most modern shipyards in the country.

Technology Leads the Way The marine industry is often saddled with the stigma that it is behind the curve technologically, which could be a factor, albeit very small, in the attrition of young engineering minds and bodies to other industries. Dr. Marcus reasons that when companies build assets that cost tens of millions of dollars and are designed for a 25+ year lifecycle, it is prudent to not always be the trying ground for new technologies. Admiral Kramek, however, dispels the notion, citing several examples in the process.

"I don't agree with that premise," he said. "Today we are designing and building LNG and CNG carriers with the highest quality stainless steel production technology, ship designed to carry LNG at temperatures -140 degree C. Just think, also, of the tremendous advances in containerization. Just 50 years ago, we were just starting to think about containers; today we are building and operating 8,000 TEU ships, and at the conference, we will be talking about 12,000 and 14,000 TEU ships.

I had a professor years ago at Michigan, and every day he would remind us about risks in the maritime area. There are great risks in making quantum leaps in technology in (this) environment. I do not think that we are risk averse, I think we are careful because failure (in our business) is so significant. 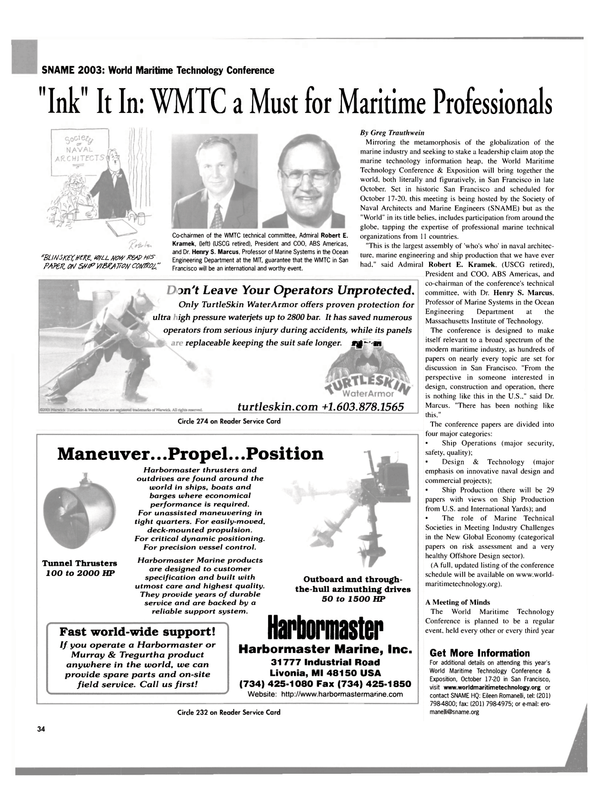 Read "Ink" It In: WMTC a Must for Maritime Professionals in Pdf, Flash or Html5 edition of September 2003 Maritime Reporter