The new Catamaran HSV 2 Swift was delivered to the U.S. Navy on August 13, 2003, during a celebration in Hobart, Australia. High ranking U.S. Military officers joined with invited guests to witness the handover of the 321.5-ft.

Swift will serve operationally as an interim Mine Warfare Command and Support Ship (MCS), and support transformational mine warfare modular mission payload initiatives. In support of Navy experimentation, the HSV will be used to explore concepts, capabilities and military utility associated with the advanced hull and propulsion technology integrated with advanced communications in support of the Littoral Combat Ship (LCS) program.

For the Marine Corps, the HSV will conduct a series of limited-objective experiments, exercises, demonstrations and training events that develop interoperability potential of high-speed vessels with causeways, watercraft, amphibious ships and other shipping.

Experimentation data will be used to access the military utility of HSVs and future joint and naval military operations or applications. The HSV is capable of maintaining an average speed of 35 knots or greater, loaded with 500 short tons, consisting of 350 personnel and military equipment. A minimum operating range of 1,100 nm at 35 knots is required by the contract, as is a minimum transit range of 4,000 n.m. at an average speed of 20 knots. Furthermore, she must be capable of 24-hour operations at slow speeds (3-10 knots) for experimentation with unmanned autonomous vehicles, and to support dedicated and emerging organic mine warfare missions.

The vessel, which is the fourth Incat Wave Piercing Catamaran to enter military service, will operate with crews stationed at Naval Station Ingleside, Texas, and Naval Amphibious Base Little Creek, Va. 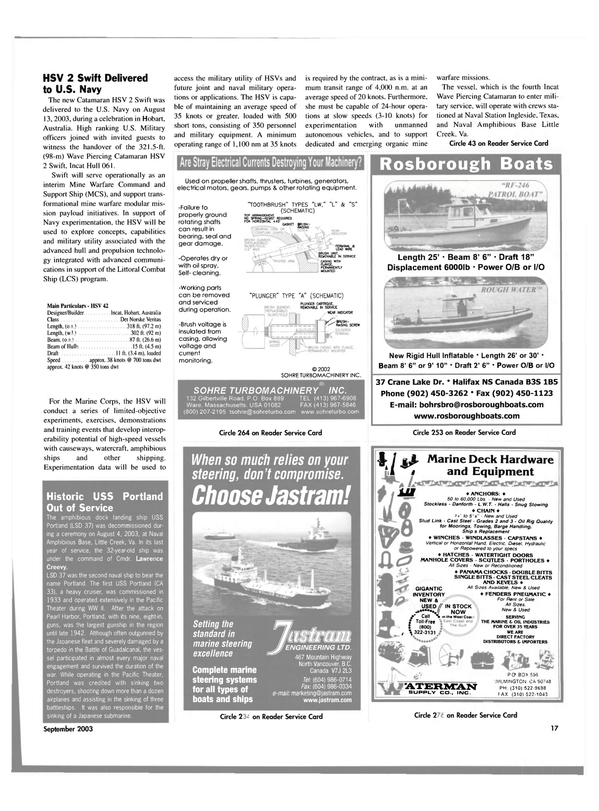