A Benchmark in Electronic Fuel Injection

MAN B&W Debuts 32/40CR Engine Common rail diesel technology is designed to be reliable, clean, economic, durable — and in the MAN Group it is now available for the engine of a small truck up to a large marine diesel. For service on the high seas the electronic injection system has again been improved. "Now this technology is where we wanted to have it," says Fritz Rape, Member of the Executive Board of MAN B&W. This in-house development combines conventional components of existing MAN injection systems with up-to-date hydraulic and electronic elements that have been developed further. "It was a strategic decision to develop common rail for our engines ourselves in order to do better than what would have been possible with existing, external systems," said Pape. The result is the new engine type 32/40CR that is now being presented in Saalfelden, Austria.

Smoother performance, lower emissions, lower consumption, flexible application in the respective area of usage: These are the most important advantages of common rail technology.

Now this MAN technology that is wellestablished in the truck sector is also available for MAN B&W's four-stroke engine range. "In developing our injection systems we have been able to build on many years of experience," said the Head of Research & Development, Dr.

Ralf Marquard. Already in 1979 the company had begun to develop common rail engines that went into serial production.

Marquard and his team have studied the different systems and have adapted and optimized the technology with regard to the size of the engines and the particular demands of maritime usage.

At MAN Nutzfahrzeuge AG, a sister company, common rail technology has been successfully applied for just over two years: approximately 9,000 MAN trucks are already on the road with this modern injection system.

In common rail diesel engines fuel is injected into all the cylinders via a "common rail". The generation of pressure and injection of fuel are not interconnected in a common rail system.

Unlike in conventional systems, the injection pressure is independent of the engine speed. Thus there is always full pressure available. The fuel is first stored in the fuel line and then, when a signal is given by the engine controls to the magnetic valves, it is injected into the cylinders. This creates an extremely fine fuel-air mixture that is designed to burn particularly efficiently. The challenge was to apply this injection system to large marine engines, and to adapt it for operation on heavy fuel oil, which means dealing with a fuel heated to approximately 150°C. The MAN injection system is based on conventional pressure-controlled injection. In usual stroke-controlled systems there is a permanently high pressure of 1,600 bar, for example, at the needle seat near the combustion chamber. In the MAN B&W system, the pressure on the valve needle is released by means of the solenoid valve controls that is located away from the cylinder head, at the common rail accumulator. As a result there is not permanently full pressure on the valve needle seat next to the combustion chamber and the electronic components are protected.

Field Tests Extensive practical testing of the new MAN B&W common rail technology has commenced since the beginning of the year. One of the five auxiliary engines of the Cornelia Maersk, a 6,600- TEU containership of the A.P. Moeller Group, is equipped with the new technology.

"The engine has been performing with convincing results for more than 1,200 operating hours," said Stephan Haas who is assisting in the field trial from the development engineering side.

The 32/40CR series engine will be available from 2005 onwards, with larger and smaller types in the pipeline. 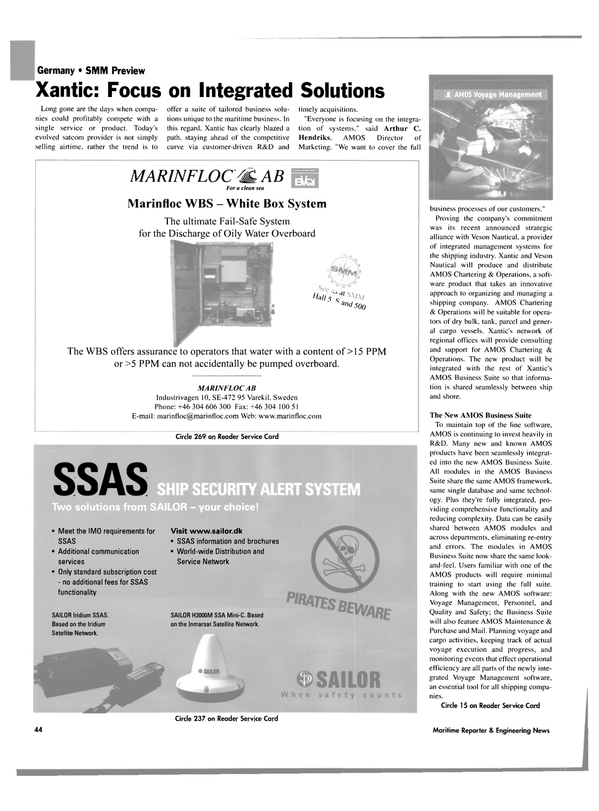