With a maximum continuous power output of 68,640 kW (93,360 bhp) at 102 rpm, it is reported to be the most powerful engine so far to employ common-rail technology. The engine is one of four ordered in 2003 for the propulsion of four 7,700 TEU Post-Panamax container liners contracted by Blue Star Reederei, a subsidiary of P&O Nedlloyd BV, with the Japanese shipbuilding group IHI Marine United Inc.

After the initial adjustments and running- in, the engine has been subjected to an extensive series of tests.

Optimization of the Sulzer RT-fiex system with this size of engine was completed with an eight-cylinder Sulzer RTflex96C during March/April at another licensee HSD Engine Co. Ltd. in Korea.

Further tests, however, have been made with the 12-cylinder engine into the performance of the engine with its common- rail systems.

The improved quality of combustion achieved in RT-flex engines which allows such low, stable speeds, together with smokeless operation across the speed range, has proved in service to leave RT-fiex engines very clean with consequent benefits for maintenance.

The Sulzer RT-flex96C is adapted from the well-established Sulzer RTA96C engine, the most powerful Sulzer low-speed marine engine type.

This is a popular prime mover for the world's largest types of container liners. 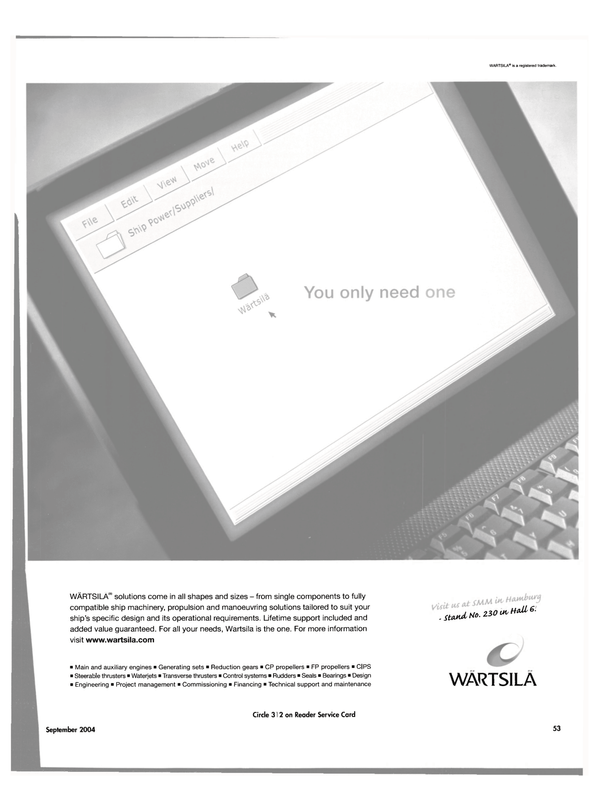