Many in the maritime industry are beginning to view the oil record book as a signed confession. The number of prosecutions in the United States for fraudulent entries in oil record books is rising exponentially and fines have recently skyrocketed. In the years 1998 through 2001, research has revealed one prosecution in each year for oil record book violations. In 2002, there were seven prosecutions - and four of those were against individual chief engineers.

There has been a veritable explosion in the number and amounts of awards made to crewmembers who report violations to the U.S. Coast Guard. In 1998, the first award ($500,000) was made to a crewmember on a cruise ship operating in Alaska. In 2002, an award of $250,000 was made to a crewmember on another cruise ship, this one operating out of Florida. The third award ($225,000) was made in 2003 to a crewmember on a bulk carrier docked in Portland, Oregon. So far in 2004, there have been three awards totaling $3.4 million. The awards have reached a level where virtually any crewmember suspected of implication in an oil record book falsification or an environmental violation (or simply disgruntled with his or her employer) may be willing to provide evidence to the Coast Guard or other law enforcement official.

How do we get to this sad state of events?

Waste liquids naturally accumulate in the bilges of ships. Part of those waste liquids consists of oil. To prevent the waste liquids from overwhelming the cargo spaces and the engine room, the material is periodically discharged over the side and into the ocean. Some years ago. in an attempt to lessen the amount of waste oil entering the ocean from ships, the international community required most ships to install and operate oily-water separators (OWS). An OWS separates oil from the rest of the liquids by means of gravity, centrifugal force, osmosis, or other process or combination of processes. Originally, the devices were designed to operate at 100 parts per million (ppm). Now, they are required to work at 15 ppm - and they often don't work well at this higher standard.

When the requirement for the OWS was developed, the international community also established a requirement that the ship maintain an oil record book.

The oil record book is intended to show how much oil is accumulated and how it is disposed. There are three major methods for a ship to legally dispose of waste oil: (1) burning on board. (2) transfer to an appropriate facility ashore, and (3) discharge into the ocean through a properly operating OWS. The oil record book contains detailed entries of oil accumulated and stored, as well as the time, place, and method of any and all disposals. Totals are supposed to match, but this is difficult as measurements, particularly of liquids in storage tanks on a ship at sea, are rough estimates at best.

There are other, more basic problems, though. For many years, governments and ship operators only paid lip service to OWS operation and oil record book entries. Waste oil was routinely discharged at sea and few seemed to care.

Chief engineers were under constant pressure to keep operating costs down.

One method utilized was to ignore maintenance of the OWS. When the OWS wasn't working properly or when the filter needed replacing, the system would be circumvented. This could be done either through use of a by-pass hose to divert the discharge around the sensor unit or by adding non-oily flush water to artificially reduce the level of oil passing the sensor unit to below 15 ppm. Alternatively, false entries could be made in the oil record book to show that more waste oil was burned on board than was actually the case. It is difficult to falsify the amount of waste oil transferred ashore, since signed receipts (and payment records) are required. As long as everyone played by the same rules, the system (while flawed) was stable.

Everything changed on February 1, 1993, when a routine U.S. Coast Guard air patrol observed a long sheen of oil streaming astern of a cruise ship on the high seas off Florida. Review of the ship's oil record book when the ship arrived in port revealed that no entry had been made relative to this discharge.

When the flag state declined to take action, the U.S. government charged with cruise ship operator with making a false statement to a federal official. The cruise ship operator litigated this and a related case, arguing, among other things, that there was no violation of federal law since both the discharge and the oil record book entry were made while the ship was on the high seas. The court held, though, that the false statement occurred when the oil record book was presented for Coast Guard examination while the ship was in a U.S. port.

After losing the procedural motions, the cruise ship operator settled this criminal charge by payment of $9 million and, in the related case, by payment of SIS million.

No other ship owner or operator has litigated an oil record book charge since those highly expensive events.

Under federal law, a false statement consists of (1) making a statement orally or in writing; (2) when the statement is false or misleading; (3) the false or misleading information is material: (4) the statement or concealment was made knowingly; and (?) the statement was made to a federal official engaged in performance of his or her duty. Here, the statement was made in the oil record book, which the ship is required to maintain and is required to present to the Coast Guard upon request when the ship is in U.S. waters. If the federal government can prove that the chief engineer or another senior person in the ship knew that one or more entries in the oil record book (which the person in charge of the operation is required to initial) is false and that the false entry was made knowingly, then the company can be held criminally responsible. The individual making the false entry (generally the chief engineer) can also be held criminally responsible.

Because the oil record book bears the initials of the person making each entry and the signature of the master, the document serves the purpose of a signed confession, for which there is almost no defense.

To minimize the likelihood that the chief engineer or another engineering officer on the ship improperly disposes of the waste oil, the company should take positive steps to ensure that the OWS is operating properly and is well maintained. The chief engineer should be clearly informed (preferably in writing) that his or her primary goal in this regard is to properly handle and dispose of waste oil and that the general admonition to minimize expenses does not apply to this goal. Also, personnel should be clearly advised of the requirement that log and record entries are to be made contemporaneously with the event and are to be accurate.

A preferred method of accomplishing both tasks is for the company to institute a maritime compliance program.

Federal law provides that, if a company has a compliance program in place and a violation occurs regardless, the company will be entitled to a major reduction in sentence. One major cruise ship company benefited from this provision when it was proven that some of its personnel had engaged in improper discharge of waste oil and falsification of the oil record book. Both the Department of Justice and the Environmental Protection Agency (EPA) have written policies providing that, in appropriate cases, they will forego criminal prosecution for companies with compliance programs.

The EPA has exercised such forbearance in the past, although not yet in a maritime context.

The bottom line is that, for a ship owner or operator to avoid handing the federal government a signed confession in the form of an oil record book with false entries, the owner or operator must impress upon its engineering officers that they are to properly maintain and operate the OWS and to make accurate and contemporaneous entries in the oil record book. The engineering officers, particularly the chief engineer, must be given every incentive to do the right thing and no incentive to do the wrong thing. 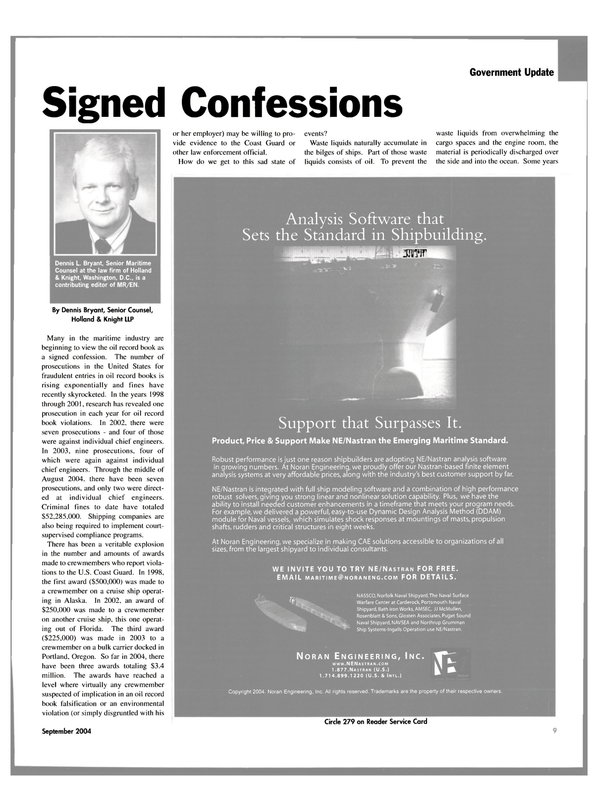