I recently expressed concern that the regulations promulgated by the Transportation Security Administration (TSA) on May 18, 2004 relating to Protection ot Sensitive Security Information (SSI) are overbroad.

Comments were received from some readers stating that the recent USCG Navigation and Vessel Inspection Circular (NVIC) regarding Guidelines for Handling of SSI was not, as I asserted, SSI because the NVIC stated that USCG policy is that only USCG docu- ments marked 'SSI' are actually SSI. I do not concur. Under the TSA regulations, which are controlling. SSI consists of a long list of information the disclosure of which would, in the opinion of TSA, be detrimental to the security of transportation. USCG NVICs "related to maritime security" are specifically included in this list, and there is no caveat that the NVIC be marked 'SSI'. I have been advised that TSA is reconsidering its policy regarding SSI in light of the various comments received on its rulemaking. Comments addressing the issue of the breadth of the regulations include those submitted by the American Petroleum Institute (API) and the Coalition of Journalists for Open Government. In the meantime, though, the current rule is controlling. One can only hope that moderation (such as that exhibited in the USCG NVIC) continues to be exercised until this situation can be resolved. 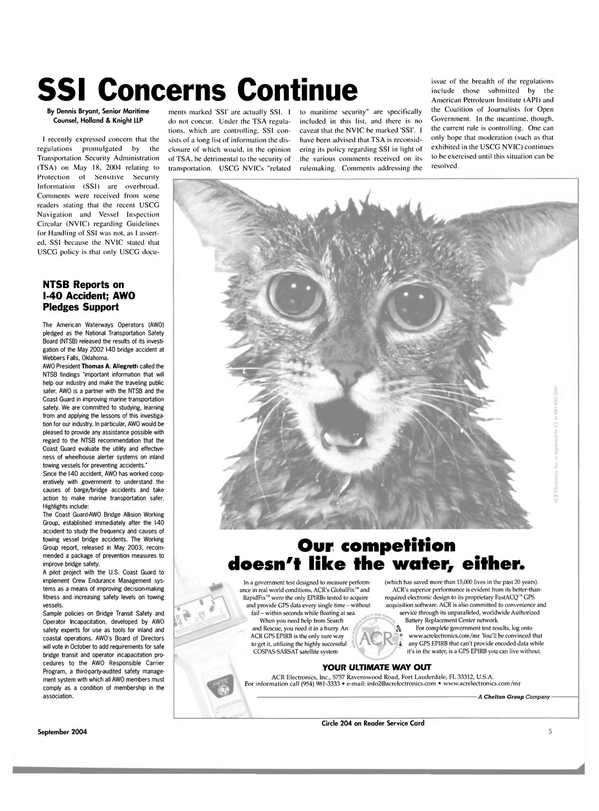