Since last year’s update appeared in the May 2012 issue of Maritime Reporter & Engineering News, Iran has continued to dominate U.S. sanctions headlines.  Significant actions by both the U.S. Congress and Department of the Treasury’s Office of Foreign Assets Control (OFAC) over the past year have increased sanctions against Iran substantially, and further initiatives are pending.  Our 2013 update concentrates on these key developments, with particular focus on Iran sanctions of interest to the maritime community.
The most sweeping legislative development during the past year was the August 10, 2012 enactment of the Iran Threat Reduction and Syria Human Rights Act of 2012 (the ITRA), which included amendments to the Iran Sanctions Act of 1996 (the ISA), the Comprehensive Iran Sanctions, Accountability and Divestment Act of 2010 (CISADA), and the National Defense Authorization Act For Fiscal Year 2012 (the NDAA 2012).
The ITRA  expanded the categories of activities sanctionable under the ISA to include:
participation in certain petroleum joint ventures;
provision of goods, services, technology or support that could directly and significantly contribute to the maintenance or enhancement of Iran’s ability to develop domestic petroleum resources or its domestic production of petrochemical products;
ownership, operation, control or insurance of a vessel used to transport crude oil from Iran to another country;
concealing the Iranian origin of crude oil or refined petroleum products;
export, transfer or facilitation of transshipment of goods, services or technology to Iran, directly or indirectly, that would contribute materially to Iran’s WMD and conventional military capabilities; and
participation in certain joint ventures relating to the mining, production or transportation of uranium.

Other Developments
Over the past year, OFAC also took action on several other fronts, including imposing further sanctions against Syria and persons threatening the peace and stability of Yemen and making numerous additions to the SDN List under various sanctions programs, while gradually easing sanctions against Myanmar (Burma).  A comprehensive discussion of all recent changes in U.S. and international economic sanctions is beyond the scope of this article, but readers are cautioned to consider all potentially applicable sanctions laws and regulations before proceeding with international transactions.

Barbara D. Linney is a member of the Washington, D.C. firm Miller & Chevalier Chartered, practicing in the area of international trade and transactions.
e: [email protected]

*This article reflects developments through May 15, 2013, the date of submission for publication.  The views expressed herein are those of the authors, do not necessarily reflect the opinion of the firm or other members of the firm, and should not be construed as legal advice or opinion or a substitute for the advice of counsel.  Please contact Barbara Linney ([email protected]) at (202) 626-5806 if you have questions or desire assistance. 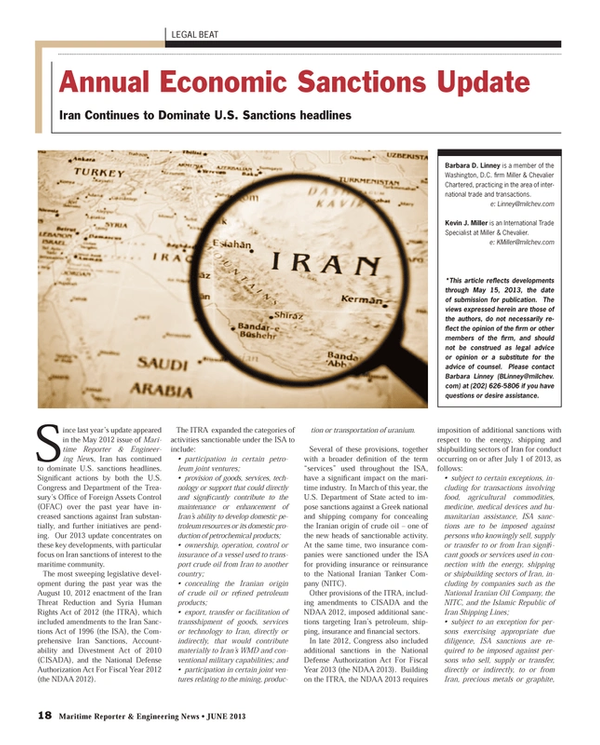