During most of 2012 Cummins Northwest was busy with the procurement of the various subsystems and assembly of the diesel-electric units for the two Ocean Class Auxiliary General Purpose Oceanographic Research (AGOR) vessels building at Dakota Creek Shipyards. The company delivered the first four-unit ship set in January of this year. Seattle-based Guido Perla & Associates, Inc. has done the design work for the two vessels.
Four Cummins QSK38-DM powered electrical generators will provide power for each of these 238 x 50-ft. vessels. The generators will provide power to each vessel’s two AC propulsion motors that each turn controllable pitch propellers. Cummins Northwest Inc. has worked with Siemens Industries to develop the generator sets.
The four gensets on each vessel will also provide power to an azimuthing bowthruster and a tunnel stern thruster as well as general electrical requirements of the vessel. As on the University of Delaware’s 2005-built RV Hugh R. Sharpe, also built by Dakota Creek, the four engines allow for sound reduction when running at slow speeds on only one or two engines as required.
Being built for the U.S. Navy’s Office of Naval Research (ONR), the two vessels, designated AGOR 27 and AGOR 28, are expected to deliver in late 2014 and early 2015. The Woods Hole Oceanographic Institution will manage AGOR 27, while the Scripps Institution of Oceanography will manage AGOR 28 under charter party agreements with ONR.
Information released by the ONR explains that, “Both ships will have the ability to sail at a sustained speed of 12 knots and will have 20 berths allotted for crew members and 24 for scientists. Some of the high-tech features planned include: acoustic navigation and tracking systems that operate at various depths; a specially designed hull that diverts bubbles from the acoustic sensor area; a centralized freshwater cooling system to provide heating, ventilation and air conditioning; and dual-controllable propellers with variable speed motors for increased efficiency.”
Secretary of the Navy Ray Mabus has announced that, when commissioned, the AGOR 27 will be officially named R/V Neil Armstrong. “Naming this class of ships and this vessel after Neil Armstrong honors the memory of an extraordinary individual, but more importantly, it reminds us all to embrace the challenges of exploration and to never stop discovering,” Mabus said. 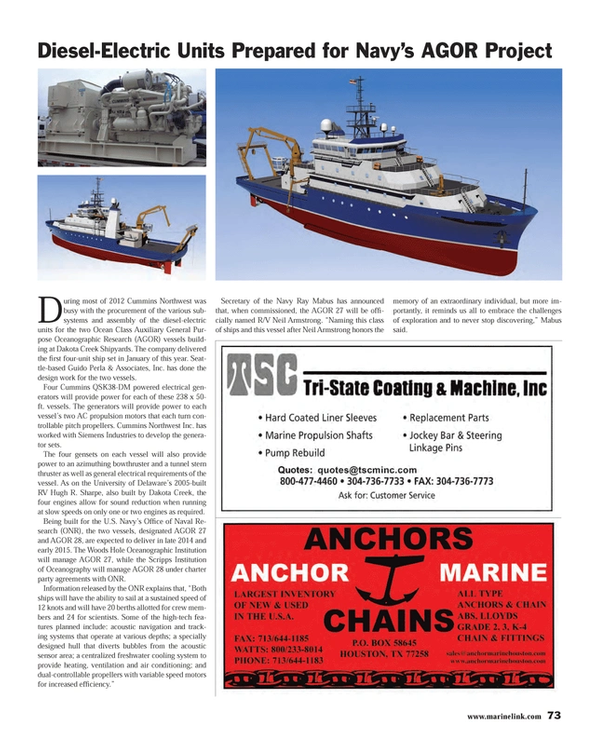