In 2008 the USCG issued the tanker final rule for salvage and marine firefighting (SMFF) under the Oil Pollution Act of 1990. This rule primarily required tank ships and barges carrying oils as defined in the 33 CFR 155 as cargo to pre-contract qualified salvors to promptly respond to a marine casualty in U.S. waters.
While tankers were the primary focus of the new rules, Non-Tankers – defined by the USCG as any vessel over 400 gross tons – waited quietly for a likely turn with SMFF requirements. Long stalled in Washington, the Non-Tanker rules were recently accepted by the Office of Management and Budget and will likely be issued as Maritime Reporter goes to press.

Why the Delay?
Raymond Lord, President of Donjon-Smit, explains succinctly: “Slow and steady often wins the race. Since the concepts of OPA90 regulations were first introduced in the wake of the Exxon Valdez disaster the world of emergency maritime response has continued to be an ongoing evolutionary process. Granted that was over 20 years ago but we need to step back and give credit to the progress that has been made thus far.”
As is the case with most new rules to industry, prudent evaluation instead of an emotional rush often yields stronger rules for the good of all.
“Many factors must be taken into account when proposing legislation that will have a profound effect upon what may be considered the back bone of U.S. commerce - the shipping industry” Lord continued. “The new non-tank regulations will effect close to 20,000 vessels. The additional administrative burden for vessel owners, the USCG, as well as the approved salvage companies will be substantial. Again, the considerable time taken to develop and institute these new non-tank regulations will only be of benefit to all parties involved giving everyone time to make the proper adjustments and to ensure a smooth implementation process.”
“The expected economic and procedural implications of the OPA-90 Non-Tank SMFF regulations on both government and industry are notable, so it was important to take the time to align all stakeholders prior to its implementation,” said Maurice Denis, Regional Manager, SVITZER Salvage Americas. “However, with the successful entry of the Tank sector into SMFF compliance in February 2011, both the public and private sectors are now better prepared to take on compliance for the 16,000 vessels in the Non-Tank segment, which is likely driving the recent push we see now for Non-Tank SMFF enforcement.”
Implementing SMFF rules for tankers first made sense, since their cargoes presented the greatest risk of a major disaster. Also, this created several indirect advantages to regulators. Working with an industry considerably smaller than the non-tank market, the already heightened regulatory culture for tankers resulted in a much easier implementation process, Lord said.

What does it mean to you?
The new regulations address the need to identify appropriate response resources, including diving, salvage, firefighting or lightering equipment and personnel, within Vessel Response Plans (VRPs). Expected to impact some 16,000 vessels, shipowners likely have already examined the new rules and their likely impact. That said, there remain as many unanswered questions as answers on what this means for shipowners and salvors alike.
Several leading salvage companies weighed in on the new rule, and the preparations necessary to ensure a seamless and painless implementation for shipowners.
“OPA 90 regulations place strict liability on the shipowner himself and as such it is critical for them to diligently evaluate to select the best contractor, and not just go by third party recommendations or fancy websites,”  said Mauricio Garrido, president, T&T Salvage. He added, USCG regulations concentrate on industry’s ability to deploy proper equipment and personnel to a casualty in U.S. waters, no matter the cause.
“The OPA-90 Non-Tank SMFF regulations will now put emergency response and preparedness front and center within the vessel owner’s business,” said Denis. “The regulations will require shipowners to take more proactive measures to prepare for and mitigate the impact of an emergency situation, and at the same time will offer vessel owners more commercial predictability in case of a response.”
Each firm contacted for this story insisted that shipowners first and foremost be diligent in vetting the prospective salvor to ensure that it is qualified, as well as being a match to the operator’s global fleet profile.
“Salvage is a relationship-based business, where reliability and trust between shipowner and salvor is paramount for a successful emergency response,” said Maurice Denis, Regional Manager, SVITZER Salvage Americas. “(This presents a) very unique opportunity for shipowners if they select a SMFF Provider which can offer them truly-global emergency response coverage and thus fully capitalize on these benefits anywhere their vessels transit worldwide.”

Making the Case
Never shy about most things, Marine Salvors did not disappoint when queried about the road ahead and what each needs to do to be ready for what comes next.
Citing an inventory of prepositioned owned salvage and firefighting equipment, Garrido said that T&T Salvage meets compliance in all USCG Captain of the Port Zones and stands ready to support Non-Tankers for compliance with the new rules, as well as with capable response to actual emergences. According to Garrido, T&T Salvage holds more than 60% of tanker market share, with a client list that includes BP, Chevron, Conoco-Phillips, Kirby, SeaRiver, Mitsui OSK, Aramco and Maersk.
High profile, experienced players Smit Salvage and Donjon Marine teamed years ago to create Donjon-Smit; their OPA 90 face to the market. Today, they are considered by many as the leading provider of worldwide emergency response salvage services, said Raymond Lord, President Donjon-Smit LLC. “Currently we have a majority of the present tank vessel clients under contract and anticipate we will continue to lead with a dominant share of the non-tanker market as well.”
At Resolve, Joe Farrell and his crew pride themselves on differentiation, finding and exploiting market specialties, while maintaining a full menu of salvage and emergency response.
“For response, non-tank owners can trust the same guys that met them in their office, or talked to them on the phone or communicated by email to be on the other end of the phone in an emergency,” Matthew Hahne of Resolve Salvage & Fire (Americas) Inc. “In the early days, it was Joe Farrell that answered the phone and Joe that responded.  Now, Joe has ensured everyone in his company has the same passion for response and customer service that he always showed.”
Hahne pointed to three reasons that sets Resolve apart:
1. Firefighting. Continuously improving its response posture, it is the only emergency responder with a live-fire academy; one that has produced 30,000+ marine firefighters.
2. Commitment. Resolve has invested close to $20m on its equipment, ensuring compliance for not only Resolve, but clients fleets as well.
3. Funding Agreement. Resolve’s funding agreement – as required by regulations – is owner friendly.  It commits Resolve to immediate response and materials while mutually approved contracts are negotiated.
Hahne adds that Resolve has added more firefighting and emergency lightering equipment to the coasts and Great Lakes areas, equipment that is tailored to meet the needs of new non-tank peculiarities. Beyond this, Resolve has adjusted and increased staff. Lana Farrell is interacting with QI’s and Owners on Client Services, and Daniel Dettor moved to London to better serve European clients.
Denis points out that Svitzer has been in the salvage business since 1833, providing a depth of experience that cannot be matched. “Secondly, being a truly global company, with offices and operations in more than 40 countries, enables us to offer customers a unique value proposition for OPA-90 response and compliance as well as global support,” Denis said. Additionally, Svitzer has made a number of investments in anticipation of the Non-Tank regulations, including emergency response equipment that includes generators, compressors, firefighting pumps and foam, lightering pumps and subsea oil removal systems. “Our largest and most important investment thus far has been on human capital, including strengthening our own operational, technical and administrative organization, building relationships with key subcontractors, and training our marine firefighting assessors and response teams,” Denis said. 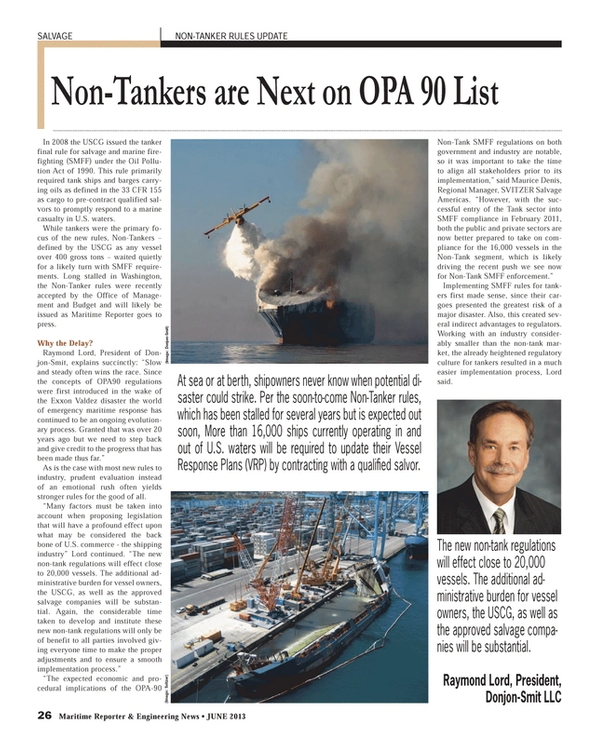 Read Non-Tankers Next on OPA 90 List in Pdf, Flash or Html5 edition of June 2013 Maritime Reporter