Popularized by Mark Twain and generally credited to 19th-century British Prime Minister Benjamin Disraeli (1804–1881)*, the above line, which in its full form is “There are three kinds of lies: lies, damned lies, and statistics” is one of my favorites. This being our June 2013 “Yearbook” edition, a publication literally packed with – statistics – I will leave it up to you, the discriminating reader of our pages, to determine the veracity of the numbers reported within.
I start with a sincere thanks to Dr. Shashi Kumar for carving precious time from a busy schedule at the last minute to discuss with me a wide range of topics pertaining to the global maritime market. Dr. Kumar – a Master Mariner, Fulbright Senior Specialist Fellow and Professor Emeritus of International Business and Logistics. Dr. Kumar was kind enough to field my questions regarding the recent history and future direction of maritime, and I found the discussion to be one of the most informative and influential I’ve had in quite some time. I think you’ll find the snippets from our conversation intriguing, starting on page 44. For example:
•    Not only does Dr. Kumar see a vigorous rebound in the industry in 2014, he’s already talking about the “next shipping recession” in 2016.
•     As the global energy picture gets turned on its head with increased production of oil and gas from the United States, and the strong emergence of China as the leading petroleum consumer, he predicts mighty swings in traditional tanker trade patterns, starting now.
•    While the world fixates on fewer, bigger players across nearly every maritime sector, and as commercial ships – particularly in the container and dry bulk markets – get ever bigger, he questions the logic and floats the notion of a “cap” on ship sizes, contending that changing manufacturing and consumption patterns … patterns that are happening today … will not support the mammoth ships in the long run.
A compelling maritime mind and a good read, I hope you will find. The overriding feeling in completing this edition is one of optimism in a growing number of sectors, though there are still several areas experiencing and expecting great pain, such as the battered containership market (pgs. 8 & 46).

The Cost of Technology
Reporting on new and emerging marine technology is the core of our being, and while the maritime industry is generally tagged as conservative, I’d say that is changing rapidly, particularly among many of the industry leaders. The advent of LNG as a marine fuel, the creation and adoption of numerous technologies, from Ballast Water Management Systems to ECDIS and the overall adoption of a “green” stance which is taking environmental initiatives from marketing slogan to action items is truly transcendent in maritime history. While ship owners generally bang their head, fists or feet with the introduction of new regulation, the question begs: how much does new technology really cost?
I am pleased to offer in this edition an insightful article from Gary English – “Breaking Down the Costs of MARPOL” (starting on page 36) – which is one of the most thorough and detail packed pieces which presents to our readers in dollar terms the impact of MARPOL the bottom line. In a similar vein, CDR Emil A. Muccin looks at the economic impacts of STCW 2010, starting on page 34.
Leaving the exact and switching to the interpretive, I am once again happy to share the results of our Third Annual Photo Contest, starting on page 62, and including our cover. With the arrival of the Maritime Labor Convention (MLC) in 2013 and the continued focus on “Mariner Matters” across the industry, I thought this an apt and elegant way to start our June edition. The photo contest is our annual ode to Don Sutherland, a long-time contributor to both Maritime Reporter and sister-publication MarineNews, and this year the results did not disappoint again, with thousands of photos from hundreds of photographers from dozens of nations. 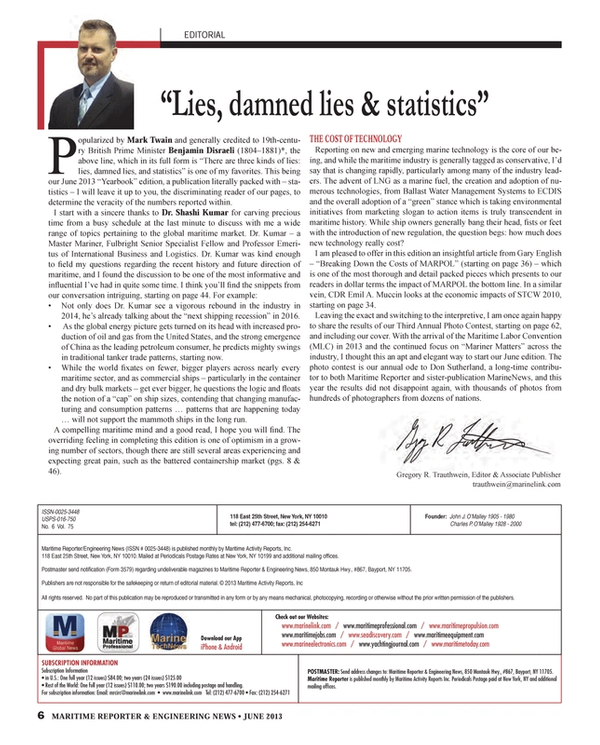