Is it possible to calculate the degree to which fouling and corrosion hinder a vessel’s efficiency? Can a ship operator use that data to determine the best time to clean or recoat the hull of his/her ship? Macsea’s answer to both questions: yes. The marine technology specialist has developed a solution called Hull Medic which they say measures the effects of hull fouling on a ship’s performance.

How it works
Using a ship’s propeller as a power absorption measuring instrument, the fully automated Hull Medic estimates both water speed and shaft power. Applicable for ships with single, double and variable pitch propellers, the calibration involves fitting a mathematical model based on propeller characteristics and ship performance measurements typically available from existing sensors on most vessels. Ship performance data is collected immediately following hull conditioning in drydock and during periods of calm weather to calibrate a performance model used to track power over time through a continuous comparison to the “clean hull” mode.
Propeller model data is analyzed periodically to compare ship performance against a standard clean-hull baseline, thus calculating the effects of hull fouling by measuring losses in speed, power and fuel. With the onset of hull fouling, the difference between measured and model-derived power will grow. The extra power consumed by the ship is then converted into extra fuel cost based on the ship’s speed profile and consumption characteristics. A similar derivation for speed loss is also performed.
Hull Medic’s automatic data sampling allows the analysis of thousands of performance records per month, which the company claims increases accuracy over manual data collection methods. Advanced statistical and database techniques are also used to eliminate the scatter that is typical of most ship performance data.
According to Macsea, the net result is an extremely accurate detection of hull fouling at the earliest possible time, allowing earlier maintenance action and more fuel savings. Macsea claims Hull Medic has the potential to save ship owners a great deal of money – and quickly. “Earlier detection means more savings in fuel and lower hull cleaning costs with less paint damage,” the company asserts.

Case Study
Macsea performed a test to track the potential benefits of the Hull Medic System. The company equipped two Navy vessels in an attempt to evaluate the relative effectiveness of alternate hull paint systems on fuel economy. Both ships were painted with different coatings during drydocking and outfitted with Hull Medic. Propeller models were then calibrated, and the ships were monitored over the year-long study.
They found that Hull Medic was able to detect early onset of hull fouling that led to an estimated to cost around $136,000 per month of unnecessary fuel consumption by one Navy ship. Macsea said, “Fuel was being wasted due to the 35% extra power required to maintain the ship’s operating speed with a fouled hull.” Because the ship was required to maintain fixed speeds in coordination with other vessels, more throttle had to be applied achieve normal speed and compensate for over a one knot speed loss due to hull fouling, resulting in additional power and fuel consumption In order. Hull Medic discovered that even small amounts of hull fouling translate into large fuel excesses for active ships, and the sooner the hull is cleaned, the more fuel can be saved. Much of the extra fuel use could be attributed to the fouling from the ship sitting at birth throughout most of the warm summer months, and Hull Medic detected this performance loss as soon as the ship returned to normal operations. The Navy then verified the extensive fouling through an underwater hull inspection and immediately ordered the hull to be cleaned.
Macsea says these results offer great advantages to ship operators. Hull Medic’s ship performance model, coupled with its database filtering, enables the monitoring device to detect ship performance losses earlier, allowing hull maintenance and fuel savings to occur earlier. Analysis of Hull Medic reports is also said to help determine optimal hull and propeller maintenance schedules, evaluate the effectiveness of alternate paint systems and even validate energy-saving technologies related to ship performance, thus generating further potential for savings. 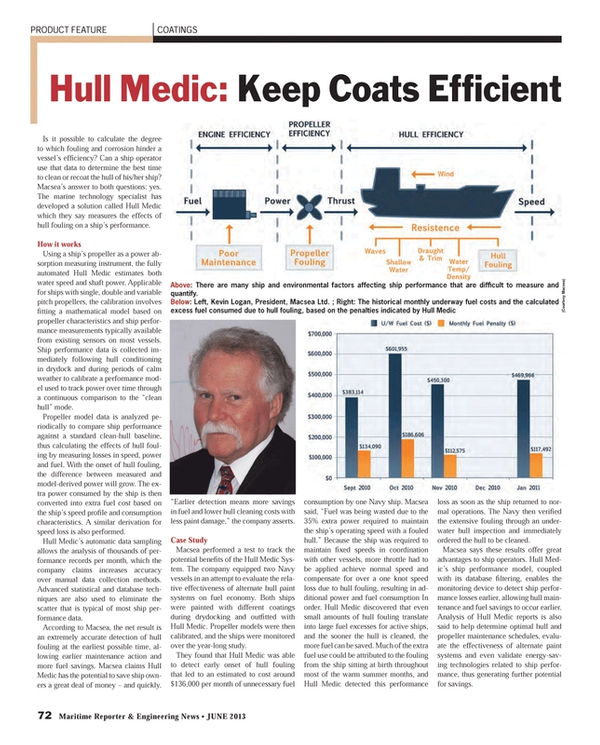