BC Ferries cut time loss injuries in half; it reduced serious injuries by two-thirds; it slashed annual insurance claims costs by more than three-quarters.

What are you waiting for?

Can a vessel operator completely reshape its safety culture? Can it transform communications, training, operational practices and even employee engagement? And most importantly, if an operator is able to make such sweeping changes, what measurable difference will it make? It turns out it can make a huge difference to almost every meaningful key performance indicator, as the experience at British Columbia Ferry Services Inc. (BC Ferries) demonstrates. At BC Ferries time loss injuries have been cut in half. Serious injuries have been reduced by two-thirds. Annual insurance claims costs have been reduced by over three-quarters. And BC Ferries was able to do all this even though it was a relatively safe organization before its culture shift. This article describes SailSafe, the BC Ferries’ safety initiative and the impressive, measurable improvements in safety metrics that have been experienced as a result.

SailSafe
About five years ago BC Ferries embarked on SailSafe, a major, multi-phased initiative to improve safety. In the words of Mike Corrigan, BC Ferries President and CEO, SailSafe “reevaluates every aspect of BC Ferries safety culture, and empowers all employees to develop solutions.”
The all-encompassing SailSafe is built on the four pillars:

But these pillars, as telling as they are, only barely begin to describe the direct and indirect goals of SailSafe. Aside from being about safety, SailSafe is about engagement, inclusivity, and cooperation. It is a joint program between union and management.  It involves every division, every line of business, and it recognizes that nobody understands the job better than the people doing it. As such, it is driven by people at the top, by front-line employees, and by everyone in between. The key to the program’s success is that all BC ferries’ employees have a place, all have a stake SailSafe.

Phase One
SailSafe, which today is in phase three, was launched in late 2007 with the help of maritime safety and human factors experts from Force Technology and WrightWay Training. Phase one began with a series of workshops and the creation of a website designed to identify learning opportunities (or “gold dust”) to be converted into actions plans centered on the four pillars. In all, more than 400 employees contributed to the gathering of gold dust to inform these action plans.
The resulting plans included items from all areas of BC Ferries operations. It included simple items like the assessment of dollies and oil spill equipment, as well as more complex items like the assessment of operations in areas of restricted visibility. It created plans around communication, employee recognition, mentoring and access to information. It addressed topics such as wet weather gear, security planning and MED record books. In all, 49 safety-related action plans - from simple to complex - were addressed in phase one. Forty-four action plans were created, documented and approved, with five of the more complex plans being carried over to phase two.
There were many notable Phase 1 achievements. For example, rigorous risk assessment and local site investigations processes were created and rolled out. Phase 1 also resulted in the creation of a tool called the ALERT handbook for reporting. ALERT stands for “All Learning Events Reported Today,” a program by which all employees are encouraged to report any safety-related issue. The ALERTs are quickly addressed and have resulted in everything from small changes in procedures to large construction projects.
By April of 2013 approximately 4,000 ALERTs had been submitted, and this wealth of learning opportunities was fostered by a shift in BC Ferries’ safety culture. Specifically BC Ferries has adopted a “just culture,” wherein employees are not punished for honest mistakes or errors in judgment, and instead learning is gleaned from all opportunities. Because of this, employees never have a reason to conceal an incident or near-miss that can serve as a learning experience for the entire company.

Phase Two
Phase two of SailSafe was an extension of phase one. In addition to addressing the five action plans carried over from phase one, phase two focused on continuing and improving safety performance while addressing an additional 36 recommendations from the original action plan. The end of phase two also saw the creation of the SailSafe Ambassador Team – more than 350 BC Ferries employees volunteered for the job of being SailSafe representatives. Team members act as a two-way information conduit - disseminating SailSafe information, answering questions of employees, and collecting and reporting on safety suggestions.

Phase Three
As of April, 2012, SailSafe moved into phase three. This phase marked the transition from the implementation of a safety program to embodying safety as a normal part of all business activities. There were no new action plans introduced in phase three - instead it is the point where safety becomes an integral part of BC Ferries’ culture. The ultimate goal of SailSafe is for the program, itself, to no longer be necessary as safety becomes completely ingrained in every activity undertaken every day at BC Ferries.
Specifically, along with a focus on safety committees and team building, some of the primary phase three goals include the following:

●    Monitoring of phase one and two action plans to ensure that their goals are realized and outcomes sustained
●    Expanding awareness of SailSafe and safety in general, and engaging more employees in the process
●    Continuing to build understanding of and use of the highly effective ALERT process.

In the words of a BC Ferries communication to employees, SailSafe will be successful when BC Ferries has, “…seen and experienced a cultural change in [our] workplace…When safety practices are fully known and practiced by all employees in all areas, all departments, and at all levels - from the President to the newest hire. We will be successful when all aspects of safety are accepted as ‘just the way we do it around here’”.

Training Effects
SailSafe is all-encompassing and there are concrete effects to be observed throughout the company. These include the ALERT process, open communication from the CEO to the employees, new procedures, the work of hundreds of SailSafe ambassadors, and more. In addition to all of these effects, one area greatly affected by SailSafe is training at BC Ferries. There are many aspects to this including a new and comprehensive simulation training program, leadership training, apprenticeships, certificate development programs and others.
One notable training initiative which embodies the philosophy of SailSafe is the SEA program - standing for “Standardized Education and Assessment”. The SEA program is an intensive blended (online and in-person) approach to job-, vessel-, and route-specific training which replaces the previous job-shadowing approach to vessel/terminal familiarization. It is supported by a new learning management system called MarineLMS (the company I work for), which was built in conjunction with BC Ferries and is specifically designed to support training in the maritime context. The SEA program is structured and sustainable, and produces consistent and reliable training outcomes - unlike job shadowing. Like other SailSafe initiatives, the SEA program involves all employees in its creation and maintenance.

SailSafe Outcomes
“We do SailSafe because we know it is the right thing to do,” said Mike Corrigan, President and CEO, BC Ferries. “If it saves us from one injury, it has been worth it.” But the results of SailSafe, as measured by BC Ferries since 2007 indicate multiple benefits - some expected, many more surprising. Of value for the industry as a whole is that the results are now quantified and documented - proving that attention to the safety culture and training work.

Safety Performance
The goal of SailSafe was to improve safety. It has done a remarkable job at doing so. Since 2007, the number of time loss injuries experienced at BC Ferries each year has dropped from approximately 360 to just over 150. Over the same period, the number of serious injuries has been reduced from roughly 100 to just over 40 and the days lost due to injury has declined from over 12,000 to under 7,500. These results are illustrated in Chart 1.
Cost Savings
It turns out that transforming the safety culture in a maritime organization is also good for the bottom line. When BC Ferries analyzed its insurance claims costs in the period leading up to 2012, they found that these costs had declined from roughly $3.5m to just over $800K, as shown in Chart 2.

On-time Performance
As part of improving safety at BC Ferries, one of the initiatives of SailSafe was to remove on-time performance from the employee assessment criteria for all but top level management. The intent of this was to ensure that an operational employee never compromised safety in the name of ensuring that the ferry arrived at its destination on time. Safety has to be paramount and this rule change sent that message loud and clear.
The concern of such a change was that although worthwhile it in the name of safety, this change would cause on-time performance to suffer. However, when BC Ferries looked over its on-time performance leading up to 2012, it found a remarkable thing. On-time performance had actually improved significantly, rising from approximately 85% to 92% (See Chart 3). While difficult to say why this happened, it is clear that factors such as reduced accidents, employee engagement, and a broadly improved working culture at BC Ferries all played significant roles.
SailSafe has been a successful initiative, but it is far from over. “Experts tell us [safety culture transformation] is a seven to 10 year process and we’re only [six] years into it,” said Captain Jamie Marshall, VP of Fleet Operations, BC Ferries. There is more to come - further training enhancements, further cultural transformation, and an ongoing process of continuing improvement. As such, we are observing the results of a transformation which is still underway. In some ways, it will never be over. 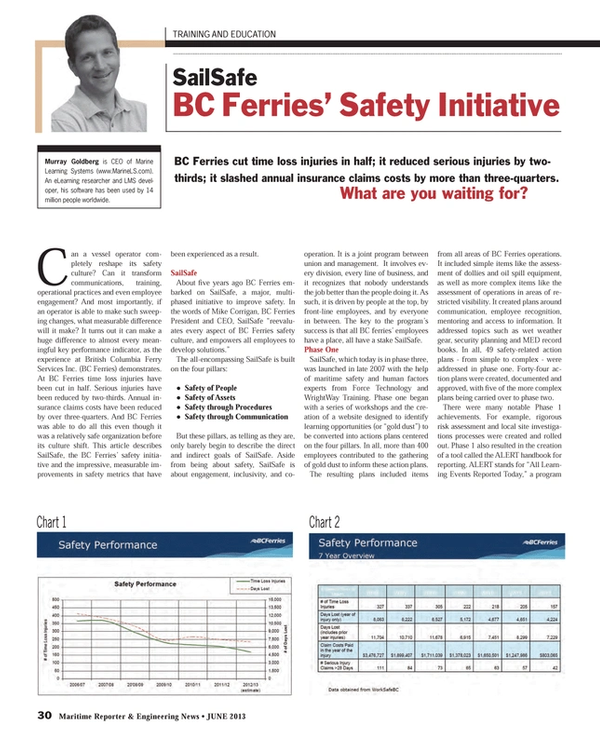