Posted on MaritimeProfessional.com by Greg Knowler

Do we sense a touch of desperation from the executive corridors of Maersk Line as the Triple-E delivery dates approach?

Maersk Line boss Nils Smedegaard Andersen was in a confident mood after his carrier posted a decent $204 million profit in the first quarter. Making a profit when Asia-Europe is a disaster and many other carriers are wallowing in red ink is impressive enough, but the Maersk CEO raised eyebrows when he addressed the rates issue.
He told Reuters he had “no doubt” the carrier could increase rates from their current level of $730 to $1,481 per TEU on July 1. That means doubling freight rates in a market that is being flooded with shipping capacity and has very little to put on the vessels. Seriously?
It is belligerent stuff, but maybe this is why: Next month, the first of a series of 20 triple-E container ships will be launched in the blue Maersk Line livery. By the end of the year, another five 18,000 TEUs vessels will be delivered, and all 20 will be in service by 2015.
That is a tremendous amount of capacity all headed for the Asia-Europe trade, currently embroiled in a rate war that has seen freight rates plummeting to record lows. Lines are desperate to raise rates to more sustainable levels but are finding it particularly difficult. One carrier, Hyundai Merchant Marine, has already postponed a planned May 15 GRI, saying the weak market cannot sustain that sort of increase. The Korean carrier will now try to impose the GRI on June 1.
The market is still trying to digest Hapag Lloyd’s announcement a couple of weeks ago that it will bludgeon customers with a July 1 general rates increase of $1,000/TEU and $2,000/FEU. MSC is also trying to extract a GRI of $750/TEU and $1,500/FEU on Asia-North Europe from July 1.
When pigs fly past your office window you will know they have all been successful.
The market has resisted rates increases for the better part of a year and Maersk Line must be looking on with mounting concern as it prepares to enter the megaship era, so the aggressive stance on freight rates is understandable. It also happens to be the second time this year the carrier has pushed its rate boat out, so to speak.
On January 1, the carrier began levying an additional $1,500 per reefer FEU on all trades, a sudden increase that shocked the market. Tired of pouring money into reefer investment while losing money on the trades, the line raised prices and said it was prepared to lose business if that’s what it took. Whether the strategy will work long term is open to debate, but Maersk has been standing by the new rates with mixed results, with other carriers following suit.
The difference is that there is sustained demand for reefers on many trades with the huge investment required a barrier to entry. But for dry boxes, this latest price hike has been announced at a time when rates are at their lowest, volumes are weak and the once traditional peak seasons now appear to be an anachronistic concept. You will search hard, but in vain, to find a Maersk executive making negative comments about the carrier’s new Triple-Es. However, as the line gets closer to opening its newbuilding floodgates, the pressure to increase rates and ensure the profitability of the giant vessels must be mounting.
Maybe there is something in the pipeline that we don’t know about, like a significant capacity withdrawal of some kind. Because in the absence of any real demand, that is about the only thing that would support such a radical increase in freight rates. 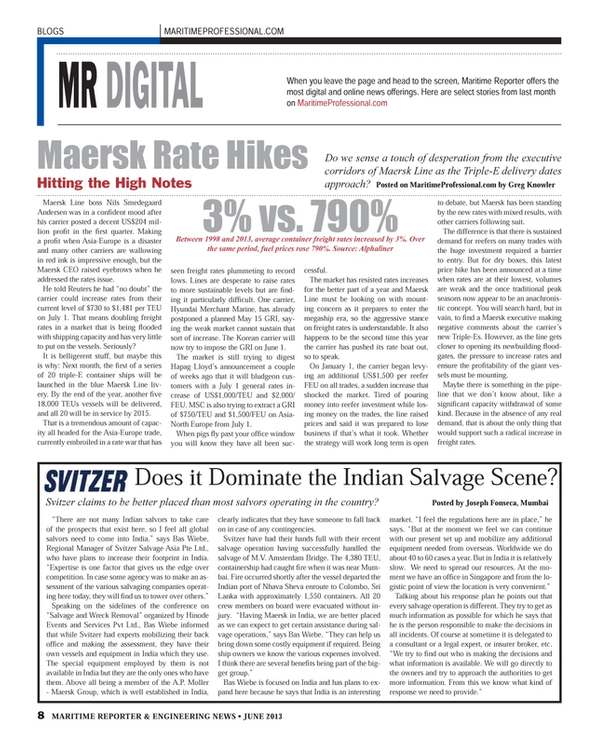