The STX Turku Shipyard in Finland recently lost the order for a third Oasis class cruise ship and an option for a fourth to ”sister” shipyard STX France, when neither the owner, the financially troubled STX Group, nor the Finnish government wanted to inject a missing $64.3m to the capital of the shipyard. The yard is currently building two 97,000gt cruise ships for TUI Cruises.
In January the shipyard delivered the world’s first LNG-fuelled big size passenger-car ferry, the Viking Grace for Baltic ferry operator Viking Line.
The advanced vessel, fitted with Wärtsilä’s dual-fuel engines, has two LNG tanks with a capacity of 200 cu.m. each for carrying liquefied natural gas placed on the open aft deck and is built to the Finnish-Swedish Ice Class 1A Super. Another vessel, a multipurpose dry cargo vessel Meri, for Gaiamare Ltd. was also delivered last year, is operating with stern first in ice, according to the double-acting DAS principle.
STX Rauma Shipyard last year delivered a Polar Supply and Research Vessel for South African Department of Environmental Affairs. The S.A. Agulhas II is a multipurpose vessel that operates as a supply, research and passenger vessel as well as an icebreaker. Another research vessel delivered last year was the deep-sea fisheries research vessel for Namibia’s Ministry of Fisheries and Marine Resources, RV Mirabilis. The ship features facilities for meteorological research and has a DP system.
In February the keel of another interesting vessel was laid, an offshore patrol vessel for the Finnish Border Guard. Fitted with dual-fuel engines, the vessel uses liquefied natural gas and alternatively marine diesel oil as fuel. With delivery set for the fall this year, this vessel is 95.9 x 17.4m with a design draft of 5m. The deadweight is 660 tons and 1,800 tons at maximum draft. The vessel has an electric machinery for its two azimuthing drives and for the two tunnel thrusters forward. There is a third propeller at the centreline aft, with the shaft directly coupled to a reduction gear of one engine. The patrol vessel will feature substantial oil combattant capacity.

Arctech Helsinki Shipyard
The first two new Arctic offshore supply vessels, Vitus Bering and Aleksey Chirikov for Russia’s Sovcomflot (SCF Group) were recently delivered by Arctech Helsinki Shipyard. The vessels are designed for extreme environmental conditions of the Sakhalin area in Far-east Russia and will work at the Arkutun-Dagi oil and gas field serving a platform of Exxon Neftegas Limited, meaning it has a very high 1.7m iceabreaking capability. The diesel-electric vessels have a total power of 18MW, with the propulsion power at 13MW, feeding two electrical azimuthing Azipod thrusters. Vyborg Shipyard built most of the steel blocks of the vessels.
The Arctech Helsinki Shipyard was established in December 2010 when United Shipbuilding Corporation (USC) of Russia acquired half of the Helsinki shipyard from STX Finland. United Shipbuilding Corporation is the state-owned Russian shipbuilding corporation focusing on developing the Russian civilian and military shipbuilding industry.
In December 2012 the yard received, also together with Vyborg Shipyard, an order to build a 16MW icebreaker for the Russian Ministry of Transport. The vessel is to be delivered in 2015. The icebreaker is intended for year-round operation in the Baltic Sea and is during the summer season to work in Arctic Russia. The icebreaking capability is 1.5m. The four main diesel-generator sets have a total power of 27MW. The total propulsion power is 18MW. “This order is very important for Arctech Helsinki Shipyard. It gives us a good base work load for the next two years,” said Esko Mustamäki, Managing Director of Arctech Helsinki Shipyard.

Breaking Ice Sideways
Another special vessel under construction is a multipurpose emergency rescue vessel and icebreaker, due to be delivered early next year. The contract was awarded together with Shipyard Yantar JSC, a shipyard part of USC in Kaliningrad by the Baltic Sea, which is building the hull of the vessel. The outfitting and commissioning of the vessel will be done by Arctech in Helsinki.
The vessel represents a completely new type of ship, both regarding icebreaking as well as oil spill combating technology. The design of the vessel is based on the ARC100 concept which Aker Arctic Technology has developed for Arctech Helsinki Shipyard. It features a patented oblique design with asymmetric hull and three azimuthing propulsors, which allow the vessel to operate efficiently ahead, astern and obliquely, or sideways. The vessel can break 1m thick level ice with a constant speed of three knots both going ahead and astern and will be able to generate a 50m wide broken channel when proceeding in 0.6m thick level ice in oblique mode. The diesel-electric vessel will be used for icebreaking and oil recovery tasks. Three main diesel-generator sets have the total power of 9.0MW. The total propulsion power is 7.2MW, providing power for three Steerprop azimuthing thrusters.

Aker Arctic Technology
Aker Arctic Technology, AARC, the Finnish engineering company specializing in developing ice-going ships and offshore structures for any cold regions, is operating as an independent consultancy. It is owned by STX Finland with ABB and Aker Solution as minority shareholders. Aker Arctic operates an ice model basin in Helsinki. Over the years, hundreds of icebreakers and Arctic offshore structures have been tested and developed by Aker Arctic. In addition to the oblique icebreaker also the double-acting icebreaking principle, where the vessel breaks ice going astern using azimuthing propulsion, and thus saving much power, has been among the developments of the company. A number of vessels have been built using the DAS double-acting ship concept, such as Arctic container vessels, for Norilsk Nickel, and Arctic shuttle tankers, for Sovcomflot, icebreakers and cargo vessels.
Recent icebreaking ships designed include the shallow draft icebreaking tug type ARC104, five vessels of which have been built for year-round operation in the Northern Caspian Sea, by Vard Braila Shipyard in Romania, for Caspian Offshore Construction. Aker Arctic is currently engaged in projects for the Sakhalin Region and has also participated in the tender design of a newbuilding for Shell, for operation in Norther Alaska. Earlier, it consulted in the design of the first vessel chartered to Shell for operation in this area, the Aivik for Edison Chouest Offshore. In Arctic Russia, OAO Yamal LNG consulted AARC for studying the LNG transportation chain including the development of LNG carrier concepts. Tenders are now out to five shipyards, four in South Korea and one in Japan, for up to 16 LNG carriers with the size of 170,000cu.m. The propulsion consist of three azimuthing pod units in a DAS configuration. The Yamal LNG development includes also several icebreakers. Russia’s LK25-type icebreaker, with a power of 25MW under construction at the Baltic Shipyard in Russia uses a hybrid propulsion design developed by AARC. In addition, AARC participates in the conceptual and basic design of the new Polar Research Icebreaker for China and in the design of the new Polar Icebreaker for the Canadian Coast Guard, CCGS John G. Diefenbaker. The design process of this icebreaker is lead by STX Canada Marine. In Europe AARC received the task to “slim down” the Research Icebreaker Aurora Borealis vessel design under the European Union ERICON project, without compromising on the scientific capabilities. The new slim research vessel, with drilling capabilities, can operating year-round in all Polar regions. The price tag has been reduced from $1.03b to under $643.3m.

New Polar Code
Recent work also included providing relevant input to the proposal for a mandatory Polar Code, the new common IMO regulations covering shipping in ice, due to enter into force in 2016. “We are worried about two things regarding development at IMO,” Mikko Niini, Managing Director of Aker Arctic Technology, told Maritime Reporter. “One is the EEDI, Energy Efficiency Design Index, pushing down ship power while safe icebreaking requires sufficient power. We are dependent on icebreaking here in Finland; and, especially for polar operations, the EEDI in its accepted format does not fit. The other thing we are worried about is that currently there is a conflict in how to implement existing ice classification regulations such as the Finnish-Swedish ice rules into the new Polar Code regulations.” He notes that UNCLOS provides the possibility for each state to decide on its own ice regulations for ships. “The worst scenario would be that there would be three mandatory ice classification regulations to be built to in the future: the local, which are the Russian ice class regulations, the Polar Code and the Finnish-Swedish or the Baltic Ice Class regulations. Now the latter gives the shipowners also a certain level of ice performance, but the new proposed rules do not. In the future the intended performance level will be the responsibility of the shipowner. This change might become difficult for the shipowner to understand, as it would force the shipowner to make a realistic risk assessment and to optimize new vessel concepts to meet his actual needs, instead of following strict fixed rules as before,” Niini said. 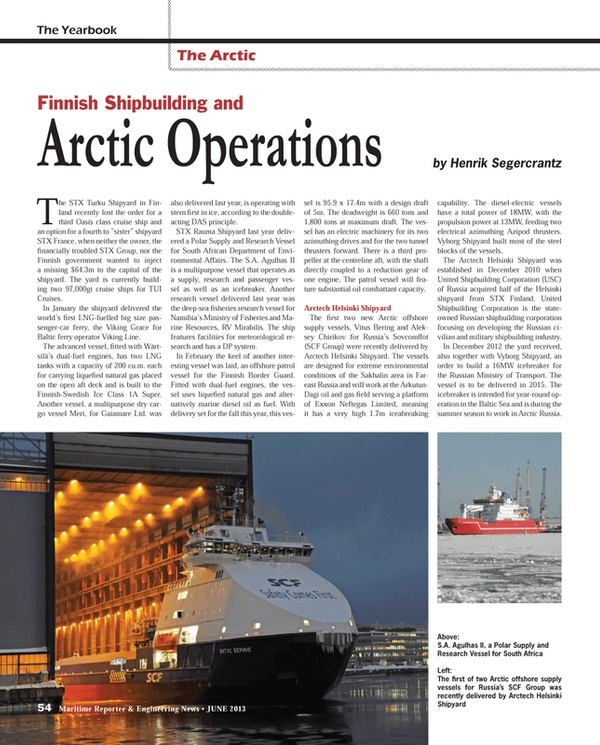