What You Need to Know to Operate Offshore Brazil

Inside Syndarma and Abeam: Organizing Brazil’s Maritime and OSV Markets

For companies interested in operating in Brazil, it is important to understand the country. MR’s Editor in Rio breaks it down

Syndarma – National Syndicate of Maritime Navigation Companies
Founded on October 5, 1934, as the official representative of the Brazilian commercial maritime navigation, Syndarma is comprised of two associations:
•    ABEAM – Brazilian Association of         Maritime Support and
•    ABAC – Brazilian Coastal Ship         Owners Association.
In addition, it also lodges the companies of the Port Support segment. Syndarma is a proponent of the Brazilian maritime sectors, demonstrating to the public the importance of the employment of Brazilian registered vessels in Brazilian waters as well as the necessity to expand the Brazilian merchant fleet, the return of its position of importance to the country’s external commerce and its participation on the exploration of the O&G reserves on the Brazilian coast.
Syndarma has 48 associated companies in the coastal, oceangoing, offshore and port support segments, generating around 16,000 direct jobs (12,000 seafarers and 4,000 administrative jobs).

There are a total of 373 vessels under the Brazilian flag, separated in the following classes:

The Brazilian maritime legislation emphasizes that the maritime transport of cargo between ports in the national territory (coastal shipping) is reserved to Brazilian Navigation Companies in Portuguese “Empresas Brasileiras de Navegação (EBN),” operating a vessel of Brazilian registry, which is common in most countries.
Brazilian legislation concerning coastal navigation is flexible, allowing the employment of a chartered foreign vessel to an EBN to perform the domestic transport in case of the lack of a Brazilian flagged vessel.
This greatly helps in keeping with the rising demand for cargo ships and OSVs in Brazil.

ABEAM
Abeam was founded in April 1977 with a main objective to contribute to the development of the national offshore support sector for the oil and gas E&P along the Brazilian continental shelf and exclusive economic zone. The Offshore Support activities in Brazil had grown continuously from the mid 1970s until 1985, when it started to decline. By 2005 growth in the segment started anew, and the last eight years have shown a marked growth trend that is expected to continue until 2020 and beyond.
“The support from bioth Syndarma and Abeam are vital to reach solutions for the bottleneck that exists today in the Maritime and OSV segments in Brazil, they are fundamental links between the vessel and ship operators and the Brazilian Government,” said Douglas Moura, Operations Coordinator for SulNorte Shipping, regarding the importance of Syndarma and ABEAM in Brazil. “Subjects that are relevant to the development of the market, such as lack of a specialized workforce base, legislation that favors the segment, along with systematic questions that impact company costs are the main focal points of Syndarma and Abeam meetings.”
With the present policy of Brazil to increase O&G production along its East coast, where the Campos, Santos and Espirito Santo Basins are located and more recently with the tendering of Block along Brazil’s Equatorial Margin or North coast, there is now a demand a much larger fleet of OSVs.
Since the Brazilian O&G market is open to foreign companies, it is not only Petrobras that is expanding its activities. All players require OSVs for activities ranging from environmental research for field licensing, to equipment and workforce transfer to offshore units, to anchor handling, pipe laying, ROV, AUV and Diver operations. Abeam has 34 associated companies prepared to operate most types of vessels employed in offshore support.
Today, the OSV market in Brazil has a limited growth due to the fact that the last bidding round for offshore blocks was in 2007. But with the 11th round that took place recently, the market should see further expansion in the near future. The spot market for short duration vessel leasing is still heated, and there is a new demand for vessels specialized in support of environmental accidents, the OSRVs. This market will expand further as the 11th bidding round was a success and those acquiring Offshore Blocks will have a large (but still undefined) demand for OSVs for new exploration campaigns.

History of OSVs in Brazil
The evolution of maritime support activities in Brazil occurred in periods marked by the following phases:
•    Implementation – 1968 - 1975 – The first offshore oil discoveries led to the import of the first 13 vessels for Petrobras.
•    Expansion – 1976 - 1981 – Brazilian fleet totals 44 vessels. Petrobras transfers to Brazilian navigation companies OSV fleet operations.
•    Consolidation – 1982 - 1989 – Operation of the first semi-submersible platforms. Procurement in public bidding for Brazilian ship owners. The Brazilian fleet of Maritime Support reaches 110 vessels.
•    Disarticulation – 1990 - 1997 – The indiscriminate opening of the market reached the shipbuilding and maritime industries. Foreign companies come to dominate the market leading to a waste of developed shipbuilding technologies and massive loss of jobs. The fleet of OSVs with Brazilian flags drops to 43 vessels.
•    New proposal (from 1977) – With the enactment of Law # 9432/97 providing for waterway transportation, through ABEAM, Brazilian OSV companies submit a fleet modernization program involving local construction of vessels appropriate for deep and ultra-deep water operations.
•    The program is being implemented, allowing the increase of the Brazilian fleet with addition of new vessels equipped with modern facilities and equipment, appropriate to market demands.
The program has been implemented, enabling the enlargement of the Brazilian fleet by adding new vessels equipped with modern equipment and facilities, meeting market requirements. 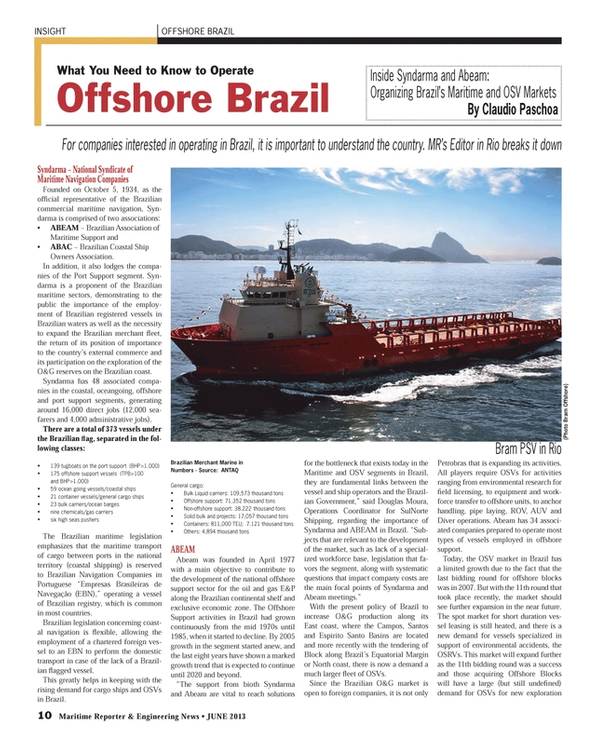 Read What You Need to Know to Operate Offshore Brazil in Pdf, Flash or Html5 edition of June 2013 Maritime Reporter