As Exports Climb to All-Time High

After a decline during the recession years, U.S. exporters today are pleased with the record-breaking value of overseas shipments. At the same time, they are learning to cope with shipping cargo that can be far different than the types of goods sold in the past. Looking back just a few years, exporters could often count on freight that was neatly contained and relatively impervious to long journeys. Today, they may be faced with goods that require special handling, or cargo with distinctive characteristics that must be taken into account during transit.
Getting cargo from ‘Point A to Point B’s has never been more challenging – and shippers who are caught unprepared may see loss claims soar and their business reputation damaged. When it comes to moving unusual cargo, the best protection is to work closely with your insurance agent and logistics provider to identify an effective strategy for managing risk.
The changing nature of cargo shipped from the U.S. is particularly evident in the U.S. Census Bureau’s statistics that track the annual value of exports. Overall, 2012 ended at $1.55 trillion, an impressive 46% increase over the 2009 low-water mark for exports.
Digging into the numbers, the traditional cargo leaders – capital goods, automotive and consumer goods – all made healthy comebacks. However, the growth in industrial supplies was particularly strong, rising 68% off the 2009 low to account for roughly one-third of all exports in 2012.
A number of factors are contributing to the recovery in export value, including a weak dollar that makes U.S. products more attractive to overseas markets. One of the most prominent factors has been the rise of global technology that allows even the smallest seller to connect with and ship their products to willing buyers around the world. While the impact of technology on the movement of goods can be seen across all categories of exports, one example from the industrial supplies category illustrates both the opportunity and the challenge for shippers: used equipment. Manufacturing and construction equipment that owners in the United States are replacing with newer, more efficient models often have enough operational life left in them to whet the appetite of potential buyers in developing countries in Africa, Asia, Latin America and Eastern Europe. Rather than turning to the scrap metal market, these owners increasingly are striking deals and shipping their used equipment to new homes overseas. As a result, international transportation providers are seeing a range of industrial components, from complete manufacturing assembly lines to printing presses, heavy-duty cranes and textile machinery. This used cargo comes with a different array of risks that can present unexpected problems for buyers and sellers alike.

A Mishap that Mushroomed
While overseas transit for the majority of cargo is uneventful, insurance is usually obtained to cover physical damage from mishaps that may occur during the voyage. When cargo consists of new merchandise, the insured value is typically easy to determine, and replacements are not difficult to find if something goes wrong. The story can end differently when second-hand cargo is involved.
One seller and insurer found this out the hard way. The multiple pieces of a several million dollar production assembly line were in transit to an overseas destination when the container that held an elevator unit was swept overboard. The estimated replacement value of the elevator unit was about $100,000. However, production of the unit had ceased years before, and none were available on the used-equipment market. The cost to custom-manufacture a replacement was $1 million, a costly and unanticipated expense.
Even when a component is not lost, problems can arise, including:
Machinery that worked perfectly well at the point of disassembly may no longer function properly when installed by its new owners. Without careful documentation about cargo condition and expected functionality at destination, exporters and transportation providers may find fingers pointing at them as the source of the malfunctioning.
Equipment that normally operates with precision may need to be recalibrated after a rough sea voyage. Establishing who is responsible for this cost before transit commences is important.
Since some components may be oddly shaped or oversized, flat racks may need to be used instead of containers, increasing the risk of mishap. Shippers should take extra steps to ensure the flat racks are loaded and stowed securely, and they should prohibit goods from being moved from the flat racks during transit. And professional packing services should, of course, be utilized to help ensure a safe arrival.
Loading and unloading the equipment, as well as stowing it securely on board each conveyance, may present significant challenges that the logistics provider will need to address.  To illustrate what can go wrong, consider this recent example from a shipment abroad: the delivery of more than a dozen used construction cranes worth $20 million went from routine to disaster when straps, that were not adequate for the weight involved, broke during the unloading process. The dropped crane was heavily damaged.
In each of these situations, it is critical that buyers and sellers understand who is responsible at every point of transit and mitigate their risk with appropriate insurance coverage.

Taking the Right Steps
The sale of used manufacturing equipment starts a multi-step process. Take an assembly line: It must be dismantled and broken down into components at the originating site. Then it is placed in containers, crates or flat racks. Next, it is moved to the port and stowed onboard. Once the destination is reached, the process is duplicated in reverse: unloading, transporting to the new site, and installing the line in its new home.
By working with an experienced ocean marine insurance agent or broker, shippers can identify the requirements they need to put in place to protect themselves. In many cases, this may simply mean requiring documentation about the agreements between buyer and seller as to responsibilities, payments and processes. It could also often include requiring that the logistic provider be someone with experience in handling oversize, used cargo. Each move is different, particularly when non-traditional cargo is involved. By understanding the “cradle-to-grave” arrangements, shippers can have the most assurance that their risks are being managed and any potential damage is covered. 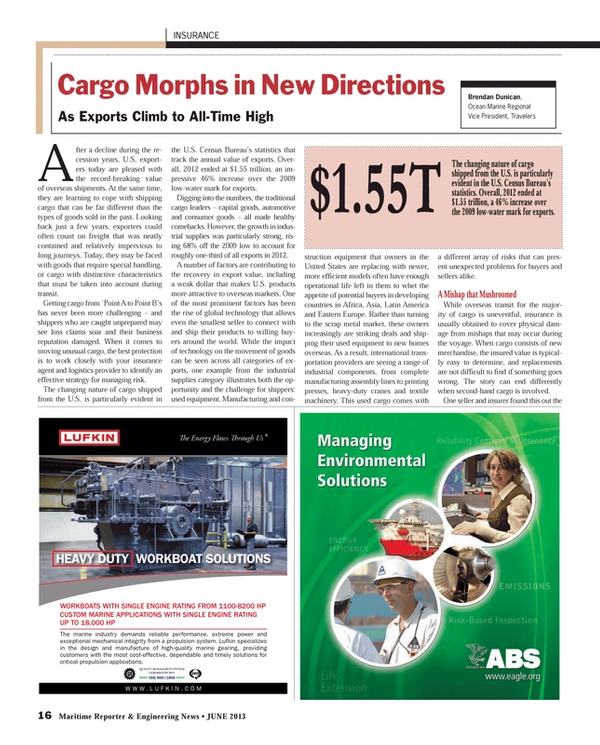