GAO finds it is broken, and now the question is; can it be fixed?

Recently, the U.S. Government Accountability Office (GAO) issued a scathing report on the Transportation Worker Identification Credential (TWIC) electronic reader pilot test and on the TWIC program in general.  The GAO said that the test of the electronic readers that are intended to largely automate access of credentialed maritime workers into secure areas not only failed, but that test results were so badly gathered that it is impossible to determine exactly where the problems lie and what needs to be corrected.
The GAO also said that the Transportation Security Administration (TSA), the agency charged with developing the TWIC program, has never determined whether the program has actually enhanced maritime security.  It recommends that the proposed TWIC reader rulemaking be halted until successful completion of a security assessment of the effectiveness of using TWIC.
As Oliver Hardy said several times to Stan Laurel in some of their many movies of the 1930s: “Well, here’s another nice mess you’ve gotten me into!”
It’s time to go back to first principles and see how things got so far off track.
What is today the Maritime Transportation Security Act (MTSA) started life in 2000 when Senator Hollings introduced the Port and Maritime Security Act to establish a program to provide greater security for United States seaports.
The primary focus of the bill was deterrence of crime and cargo theft on the waterfront.  A provision was included near the end of the bill, probably as an afterthought, about also reducing the risk of maritime terrorism.  The bill was under active consideration in the Senate on September 11, 2001.  Almost overnight, the legislation was flipped on its head.  Combating maritime terrorism was moved to the forefront and those provisions were massively expanded.  A requirement for maritime transportation security plans was cobbled together, copied liberally from the vessel response plan provisions of the Oil Pollution Act of 1990 (OPA 90).
Of significance here, the statute, which sailed through Congress with minimal debate, required that the Secretary of Transportation (this responsibility was later transferred to the Secretary of Homeland Security) prescribe regulations to prevent individuals from gaining unescorted access to secure maritime areas unless they possessed a “biometric transportation security card.”  There was no real consideration before or since by Congress as to whether possession of a biometric transportation security card would actually enhance security.  How the biometric approach got inserted into the bill is unclear.  Possibly it was suggested by a lobbyist.  Regardless, the biometric approach has never been re-examined to determine whether it is the best, or even a feasible solution to an ill-defined problem.  Even the scope and nature of the maritime terrorism threat has not been examined.
In the period immediately after the horrific terrorist attacks of September 11, 2001, the American public and the United States Government saw terrorists on every airplane and hiding behind every shipping container.  Numerous innocent passengers were taken off commercial aircraft because they looked different or read the Koran or did something else out of the ordinary.  The decision was made, with minimal deliberation, to compile an extensive list of people who should not be allowed to fly.  It was also decided that people should not be allowed to work on U.S. vessels or on waterfront facilities unless they have undergone a successful background check.  Persons who had undergone the background checks would be issued identification cards.
No identification card, no maritime employment.  Terrorist threat eliminated.
As time passed, it was seen that the terrorist threat was not what was originally imagined and that the initial no-fly list program was seriously flawed.  Many innocent persons were adversely impacted, with little opportunity for recourse.  The program has since been severely constrained.
No such adjustment has been made to the maritime security program; it is largely the same as it was envisioned in 2002 when the legislation was adopted.  The Transportation Security Administration has been diligently trying to implement a program that was fatally flawed from the outset.  Certainly, there have been a number of missteps, but the course set by Congress has remained constant.  With the maritime security program as enacted into law, the U.S. Government has been chasing ghosts for 11 years.  The time has come to conduct a meaningful analysis of the extent of the maritime terrorism threat and the most efficient way to address that threat.
As a student of history, I recall the period following the attack on Pearl Harbor on December 7, 1941.  Japanese-Americans were viewed with suspicion, if not downright hostility.  Japanese-Americans on the West Coast (California, Oregon, and Washington) were moved into internment camps for several years, with no legal recourse.  Curiously, Japanese-Americans on the East Coast and in Hawaii were unaffected.  It was eventually recognized that Japanese-Americans were not a security threat, the internment camps were closed, and the federal government apologized and paid limited reparations.
This leads me to ask why individuals working at a grain elevator that loads wheat onto a barge or ship on the Mississippi River are potential threats to the security of the United States while individuals loading wheat onto a railcar twenty miles away are not.  What security threat is presented by the three or four crewmembers on a whale-watching boat out of Maine or commercial fishermen on the Gulf of Mexico?  National security checks are not undertaken with regard to the driver of a 30-passenger bus, but are with regard to the master and crew of a 30-passenger tour boat.

Why?
We have created a program that singles out one commercial sector for vastly heightened scrutiny and developed an overly-complex process for its implementation.  I recommend that Congress immediately call a halt to further implementation of the U.S. maritime security program and direct the establishment of an independent commission to examine the threat and recommend a reasonable means of addressing that theat.  We have spent 11 years trying to resolve a problem that may not have ever existed outside of our own overheated imaginations.  Let’s take a deep breath and examine where we are. 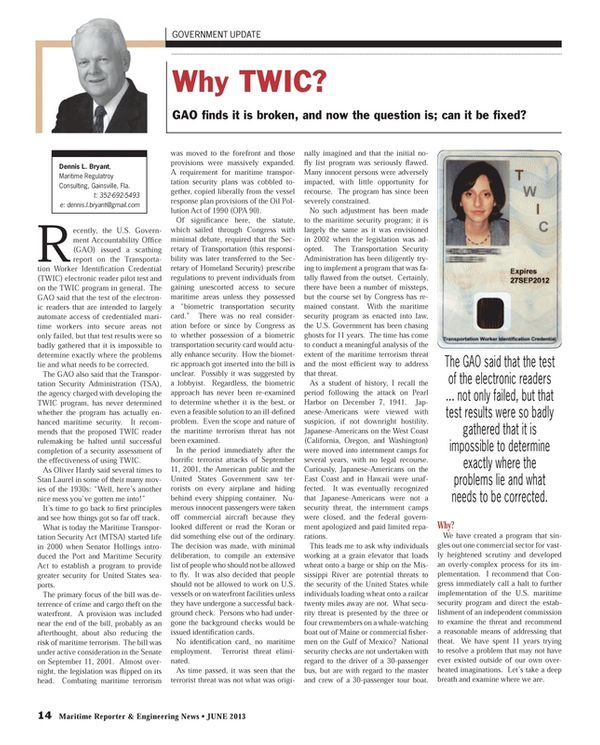 Read Why TWIC? in Pdf, Flash or Html5 edition of June 2013 Maritime Reporter