While economies across Europe have essentially bumbled, stumbled and fumbled in the wake of the global economic meltdown, Germany has remained comparitively strong. Despite the general migration of shipbuilding to the Far East, we decided to check in on the current status of this proud nation with a strong maritime heritage.

German shipbuilders concentrated in 2012 on building cruise ships, megayachts, freight ferries and additional high-value, specialty ships. In total, nine German shipyards across 12 shipbuilding sites supplied 21 sea going ships with a total tonnage of 473,700.
While the group expects a slow but steady recovery from what have been a historic economic malaise, it is generally agreed that in the next few years, difficulty in the merchant shipbuilding sector will continue.
Apparently, though, the maritime economy starting to recover after years of crisis. In 2012, while the situation in the German shipbuilding industry cannot be classified uniformly as good, at the very least it was a better situation than in 2011.
After many years of decline, the German shipbuilding industry has seen its employment numbers increase, as in September 2012 there were 16,852 directly employed people working on all German shipbuilding sites,  a growth about 3.1%, or a net increase of 501 employees. This is a particularly positive development, particularly when one looks at the period between 2008 and 2011 when about 4,200 employees had lost their jobs.
Overall it has been an active and in some regards uneven year for the German shipbuilding industry, as some yard expanded and tried successfully to develop the offshore market, as well as develop the tools and talent for the construction of special ships. On the other hand, some shipyards had to decrease the number of employees and in some extreme cases, applied for insolvency.
But per usual, the hallmark of German shipbuilding is diversity, and the types of merchant vessels built is wide spread, and includes four RoRos and three cruise ships, as well as one multi-purpose cargo ship, one LNG tanker, a dredger and a rescue cruiser, plus  five authority ships of different types. Included in the balance are six megayachts and seven river cruise ships.
Only six cargo ships were christened in Germany last year, which includes four freight ferries delivered by Flensburger Schiffbaugesellschaft (FSG), one multi-purpose vessel from Ferus Smit and also one LNG-tanker supplied by Meyer Shipyard; significant in that it is the only new build tanker from a German shipyard. Perhaps even more significant is the fact that for the first time, since the dawn of the  container shipbuilding age, not a single newbuild container carrier of any size comes from Germany.

High Export Percentage
When you look solely at the number of ships built, the percentage built for export is 76%; when looking solely at tonnage built, 83% was built for export. The most important buyer was the United States for luxury cruise vessels. Leaving out megayachts, which mainly operate under the flags of the Cayman and the Marshall Islands, all other new buildings have been destined for European buyers.
Meyer Shipyard, together with their sister company Neptun Shipyard in Rostock-Warnemünde, again proved its exceptional position within German shipbuilding circles, regarding the construction of both types of ships and in terms of absolute tonnage delivered. The Papenburg-based shipbuilders supplied in 2012 the Disney Fantasy, AIDAmar and Celebrity Reflection, which was the biggest German newbuild of the year. In addition, there was a keel laying for an LNG tanker at the Warnow facility, significant as it was the first in 40 years in Germany. Also there were seven river cruise ships, which also underline a production record of the Neptun Shipyard. With a total of 340,220 BRZ, Meyer Group totals 72% at the German shipbuilding total. The company also received what is arguably the most spectacular order of the year – a 163,000 BRZ vessel for the Norwegian Cruise Line, with an option of a sistership. This new build will be the biggest cruise ship ever produced in Germany once it is delivered in 2015.
Flensburger Schiffbau-Gesellschaft, FSG, was another production builder in 2012 with a total delivered tonnage of 90,700 BRZ. FSG produced four RoRo freight ferries for clients in Great Britain and Turkey, and also participated, together with Lürssen, TKMS and P+S Shipyards, in building the combat support ship BONN for the German Navy. After years of producing primarily RoRo vessels the shipyard expanded its product portfolio by taking orders for heavy cargo and seismic ships.

Special Shipyards
Abeking & Rasmussen continued with its series of SWATH-Pilot ships with the new build delivery of Wandelaar for Belgium. The patrol boat Cesis, which is also a SWATH type boat, has been delivered to Latvia and the hydrographic research ship Jakob Prei to Estonia, and the 60m charter yacht Excellence V has been delivered to a hirer in Fort Lauderdale.
Fassmer Shipyard again sported a diverse offering in 2012, among its newbuilds is the prototype of a new rescue cruiser, Harro Koebke, for the German maritime SAR-Rescue, as well as a workboat, a tug and a buoy tender for the Federal Waterways and Shipping Administration. The shipyard also supplied the complete package for the in Cartagena-built patrol boat Arc 20 De Julio, a ship for the Colombian Navy.
In Bremen-Vegesack, Lürssen Shipyard continued with the production of megayachts that quite frankly are in a class of their own. The country’s leading yacht builder delivered the 147m Topaz as its second largest new build, while sister company Kröger Shipyard delivered two, Ace and Quatrelle. For capacity extension reasons Lürssen purchased another floating dock, a floating dock in Wilhelmshaven based navy arsenal which has been used for repair of megayachts.
Nobiskrug Shipyard in Rendsburg also delivered luxury yachts: the 74m Mogambo and the project 783. Nobiskrug’s order book contains megayachts of 60, 74 and more than 100m; and the yacht Siren came back into the covered building halls for class and renovation works.
Leer-based Ferus Smit Shipyard held steady with the decidedly less glamorous but still important simple designed freighters, supplying in 2012 a multi-purpose ship Fuldaborge, while laying the keel fro the 23,000 dwt newbuild Reestborg, which is due for delivery later this year.

Productive Lower Saxony (Niedersachsen)
Sea going merchant navy new buildings are spread within the German states as follows: Niedersachsen accounts for 10 new builds from four shipyards; Schleswig-Holstein accounts for eight newbuilds from three yards; and Mecklenburg-Vorpommern, Bremen and Hamburg each have one.
Two decades after the formidable modernization process within the East-German shipbuilding industry, the percentage related to the total German production is declining. The order books contains only two Swedish coast guard boats, to be supplied by P+S shipyards, which went into insolvency in November 2012. The delivery of the two remaining patrol boats are scheduled for February and April 2013. Two car ferries out of Stralsund haven been rejected because of technical problems.  Shipbuilding operations resumed in early January at P+S Werften’s Volkswerft Stralsund shipyard following an 11 week break due to insolvency. The good news came on the heels of a report by insolvency administrator Berthold Brinkmann updating developments at P+S Werften in Stralsund and Wolgast to a meeting of creditors and the creditor committee. Work at the Peene shipyard in Wolgast was able to continue uninterrupted during the previous proceedings.
On November 28, 2012, the state of Mecklenburg-Vorpommern approved the debtor-in-possession financing for $56.5m that the insolvency administrator had requested.
This was possible within the framework of the liquidation plan, given the scope of the rescue aid granted. Regarding the two RoPax ferries moored at the shipyard’s dock in Stralsund, which originally had been ordered by Danish shipping company Scandlines, the administrator is now holding a number of talks because the number of parties interested in those two ships is growing.
At the Peene shipyard in Wolgast, which was sold to the Lürssen Group in December 2012 with an effective date of May 1, 2013, shipbuilding activities are proceeding as planned.
Because of their insolvency also the Hamburg based Sietas Shipyard could deliver only the suction dredger Eke Möbius – one double-end-ferry for a Danish client is not completed yet. Lürssen Shipyard supplied a big megayacht and increased the overall production of the German shipyards. A number of tradition-rich shipyards like e.g. Lindenau in Kiel, Peters in Wewelsfleth or Mützelfeldt in Cuxhaven but also the group works of Thyssen-Krupp have not delivered any new buildings in the last year.

In 2008, Hamburger Lloyd was the first tramp shipping company worldwide to commission four “4,600 TEU wide-beam container ships” from the Chinese Shanghai Shipyard and Jiangnan Shipyard. The first two newbuildings, RHL Conscientia (CCNI Aysen) and RHL Concordia (CCNI Andes) were put into service in 2012 as state-of-the-art container vessels. In 2013, two sister vessels are to follow, so that the RHL fleet will then comprise of 16 units.
On May 2, 2013, Reederei Hamburger Lloyd took command of the third of four 4,600 TEU Containership Newbuildings (hull No. H1025A) from CSSC Shanghai, Jiangnan Changxing Heavy Industry Co., Ltd. Another vessel of the same type (No. H1026A) is expected to follow in August 2013. The vessel was named RHL Constantia by Ms. Christine Wegner, lawyer and partner in the shipping law firm Cyrus Makowski.  RHL Constantia entered a time charter for account of Mitsui O.S.K. Lines Ltd., Tokyo, on May 15, 2013, and will trade between the Far East and the U.S. West Coast under the command of Captain Jurij Savliukevic.
M/V RHL Constantia is 259.8 x 37.3m and carries 57,000 tons at a design draft of 12.5m. It can take 4,620 TEU of cargo, of which 1,856 TEU in the holds and 2,764 on deck, up to seven tiers high. Altogether, there are 600 reefer sockets available on deck, and the ship is powered via a 36,240 kW MAN main engine, type 8K80ME, which allows the ship a cruising speed of 23.3 knots. Reederei Hamburger Lloyd GmbH & CO KG was founded in 2007 by experienced merchants and shipowners from Hamburg, and today its head office is situated in the heart of this North German seaport.
Reederei Hamburger Lloyd (RHL) has specialized in the container shipping sector and cooperates closely with the shipping activities of Hansa Hamburg Shipping International GmbH & Co. KG, to whom it is linked through its shareholder structure. The fleet managed by Reederei Hamburger Lloyd consists of 14 top-modern container ships, all certified according to ISM (International Safety Management). All vessels operate worldwide and have been built under the supervision of Germanischer Lloyd (GL). 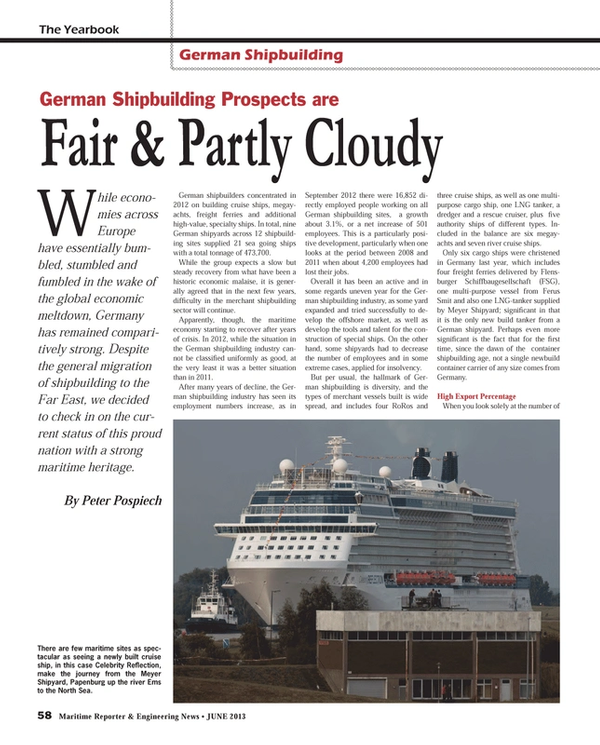