Nils Hellen, managing director of the Association of Finnish Metal, Engineering and Shipbuilding Industries, recently visited the United States by invitation of the Finnish American Chamber of 'Commerce.

Mr. Hellen, in his address as guest speaker to American businessmen and editors at the Biltm'ore Hotel in New York, illuminated the present position and importance of the shipbuilding and engineering industries in the economy of his country, particularly emphasizing their competitiveness on the world markets.

The structure o'f Finnish industrial production has changed essentially in the last two decades. Other branches of the industry have caught up with the traditional processing of wood. Shipbuilding and engineering, mechanical as well as electrical, can claim the most spectacular expansion. In regard to the number of employees and the value of production, the metal branch is now Finland's number one industry. Its share of total exports is 27 percent, second to 50 percent for forest products.

In international scope, Finnish industrial enterprises are comparatively small. Due to their limited capacity, they do not strive to compete in terms of quantity. They concentrate instead on specialization and advanced technology.

Fields in which Finnish know-how has acquired a high reputation are, for instance, metallurgical processing and manufacture of a wide range of woodworking machines and materials-handling equipment.

This purposeful course of specialization is also typical of Finnish shipbuilding. Finland ranks 15th in the world's shipbuilding statistics.

The size of the biggest ships so far ordered from Finnish shipyards is 150,000 deadweight tons, but many special ships have been built or are under construction which, in their own category, are entitled to the description "biggest in the world." Large-scale expansion and conversion of major Finnish shipyards have moved the nation forward a full generation in only a few years, was Mr. Hellen's report.

Giant semisubmersible oil drilling rigs, operating at unprecedented depths of 1,000 meters are part of a new look in Finnish shipbuilding production. Shallow-draft oil tankers, ranging from 150,000 to 300,000 tons are going into production in 1974. And Finnish technicians are pressing research to maintain the nation's world supremacy in new types of icebreaking and Arctic vessels.

Finnish yards have strengthened their grip on the world market for luxury cruise vessels in the 1970s.

Vessels of this type recently completed in Finland include deliveries of a new fleet of three ships to the Royal Viking Lines, plus three to the Royal Caribbean Cruise Line, which operates out of Miami. All are in the over 2O,0OO tonnage class.

At the beginning o'f 1974, Finnish shipyards reported a backlog of orders for 63 vessels on their books. 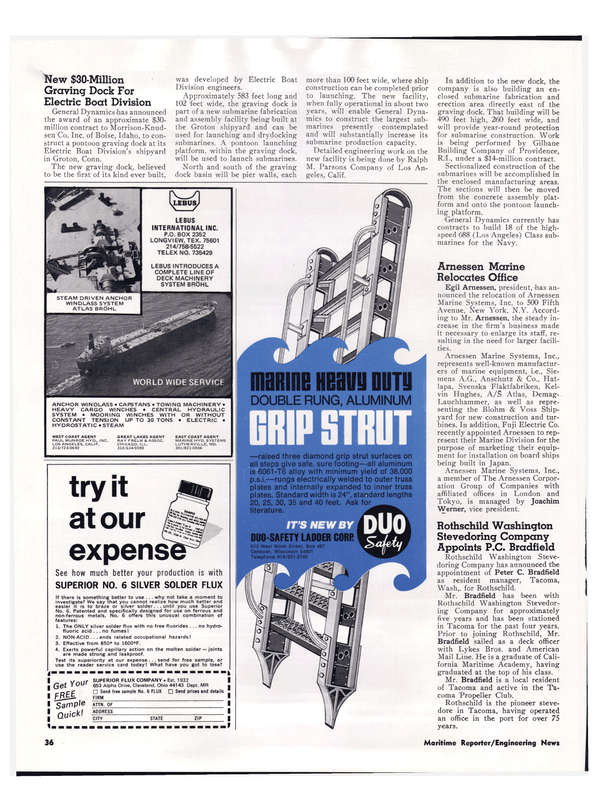