The hull assembly nears completion as the icebreaker-type bow is installed on a new design gas turbine-powered oil tanker under construction at FMC Corporation's Marine and Rail Equipment Division in Portland, Ore.

Setting the section as a whole is typical of PMC's modular construction method, utilizing a giant crane. To further facilitate construction, modular living quarters, complete with carpets and bedspreads, will be installed in the steel deckhouse. The pilothouse will be equipped with the most sophisticated navigational equipment available today.

The first of six 35,000-deadweight-ton tankers under construction in a $102-million contract, the vessel is the largest ever built in Portland, and the first built in this area since World War II. The tankers will be chartered to 'Chevron Shipping Company, a wholly owned subsidiary of Standard Oil Company of California. The ships will be used to transport oil along the Pacific Coast from Alaska to California, and to Hawaii.

The hull >on each tanker is 650 feet in length, with a molded breadth of 96 feet and a molded depth at the side o'f 50 feet. The operational draft is 34 feet. Ship cargo will be divided into a tank layout in accordance with latest requirements of IMCO, the international maritime agency of the United Nations.

According to C. Bruce Ward, president of the FMC Division, construction of the six tankers will provide an uninterrupted production schedule, providing steady employment into 1977. This new shipbuilding is indicative of U.S. efforts to gain a foothold in the world shipbuilding industry.

The innovative design concepts, which are embodied in these vessels, are creating considerable interest in maritime circles around the world.

To minimize the FMC yard's power plant engineering work, General Electric has designed and will have the performance responsibility for the complete system through to the output coupling of the main propulsion motor.

To handle expanded shipbuilding work, FMC acquired an additional 23 acres adjacent to its existing facility in Northwest Portland, and also invested in a $1-million 200-ton-capacity whirley crane and new types of welding equipment, including a numerically controlled burning machine for cutting metal plates. 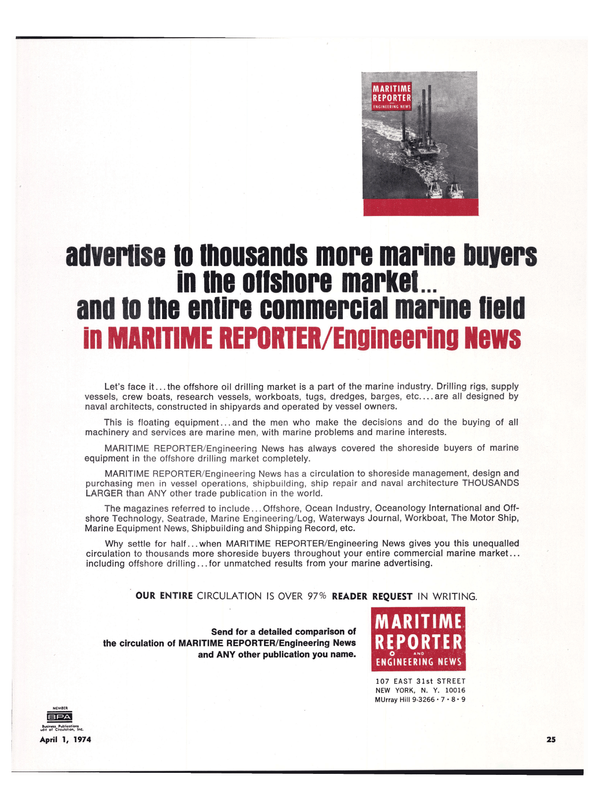