Another step to control the effects of major open-seas oil spills was taken recently when a Lockheedbuilt experimental oil skimmer and its Coast Guard escorts rode through a storm off the northern California coast.

This demonstration of survival capability may have been the final open-sea test for the High-seas Oil Recovery 'System protoype built by Lockheed Missiles & Space Co., Sunnyvale, Calif., under U.S. Coast Guard contract.

The successful demonstration points the way for the Coast Guard to control significant oil spills, such as the Torrey Canyon tanker grounding on the English Coast, the Santa Barbara oil-well blowout, and the 1970 collision of two tankers in San Francisco Bay. With an effective oil-containment barrier and a rapid oil-recovery device such as the Lockheed-built unit to work inside the barrier, a major portion of the spilled oil could have been picked up before it could damage beaches, marine life, and water craft.

Environmental protection is a Coast Guard primary mission today, and the service is devoting much time, money, and many men to this difficult task. A device like the High-seas Oil Recovery System can provide it with another effective tool to keep the environment clean.

Based on Lockheed's patented commercial Clean Sweep oil-water separator, the high-seas unit is designed to clean up oil spills in offshore waters and to do so under adverse sea conditions.

During the survival test, the unit was towed for four hours at speeds to 10 knots in a sea state five—imposing conditions well above the test requirements. The test flotilla experienced winds up to 40 knots, swells to 12 feet and waves to four feet. Observers said the machine rode the storm-stirred seas like a water bug.

Lockheed test manager Charles F. Scharfenstein Jr. said the highseas Clean Sweep wave response was excellent, and the machine was a stable platform with a dry deck except 'for spindrift from breaking seas.

First sea trials to test maneuverability, durability and stability of the machine began in September, when it was trucked to the Coast Guard base on San Francisco Bay and successfully put through its paces inside the bay and outside the Golden Gate. However, the waters outside the bay were unusually calm through the fall months, and the survival testing finally was shifted to the fishing and lumber port of Eureka.

Coast Guard specifications called for the air-transportable high-seas unit to work effectively in seas with average waves of five feet, random waves to 10 feet, and a two-knot current and in winds up to 20 knots.

The machine's oil-recovery capability was successfully tested last summer in a huge wave-generating tank at Battelle Northwest at Richland, Wash. The machine recovered up to 1,000 gallons of oil per minute under some conditions.

Heart of the recovery unit is a paddle-wheel disc-drum, mounted crosswise between four inflatable pontoons that form a catamaran and support the aluminum hull.

Within the hull is the diesel engine that powers the disc-drum, the oil transfer pumps, the air pump to inflate the pontoons, and the electrical control system. For assured flotation each inflated pontoon has a backup inside that is inflated simultaneously.

As the disc-drum revolves in the oil-water mix, oil adheres to the discs (while the free water runs off) and is carried past wipers that direct the oil to the hollow axle.

Then the oil is pumped from the machine to storage containers.

The machine is designed to be carried to an airport near an oilspill site, be assembled (requires about an hour) and be towed or carried on a buoy tender to the work area. Through use of a 300- foot umbilical, the unit can be operated and refueled from the support vessel. 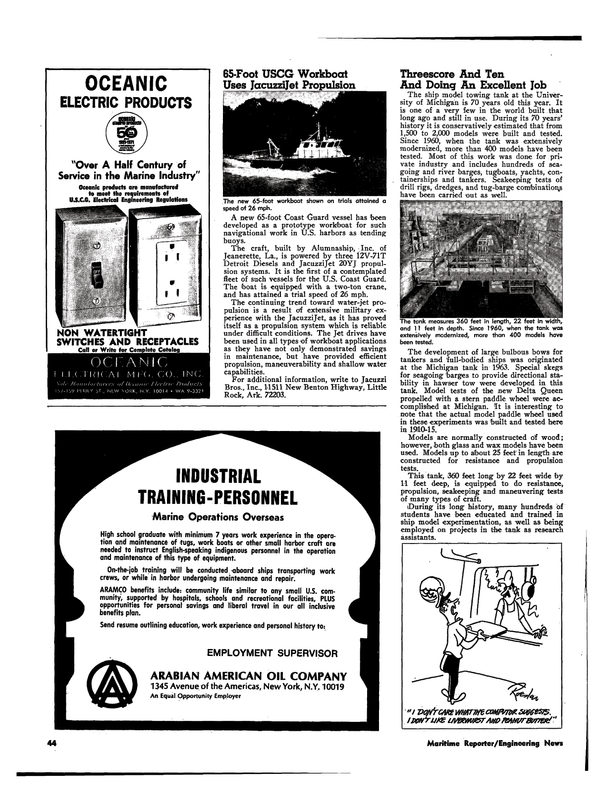