White there are grave uncertainties in the picture of world oil supply and demand as a result of Middle East and other developments, it is expected that U.S. tankerborne imports of oil will more than triple during the 1970s.

The projection was made in Tulsa, Okla., before the "Symposium on Transportation Developments of the 70's," at the 76th National Meeting of the American Institute of Chemical Engineers. It was offered by Philip J. Loree, chairman of the Federation of American Controlled Shipping (FACS). FACS members control 85 percent of the U.S. Effective Control tanker fleet, and also own and. operate more than half of the U.S.-flag tanker fleet. (The -U.S. Effective Control fleet is made up of U.S.-owned Liberian and Panamanian tankers and bulk carriers which have 'been committed to the United States by their owners in times of national emergency.) Mr. Loree forecast that U.S.- waterborne imports will escalate from 2.7-million barrels a day in 1970, to more than 9-million barrels a day in 1980. He stressed that his projections were essentially valid "assuming that the oil embargo is lifted and that 'limitations on foreign oil production are removed." The FACS chairman explained that although the figures were based on a study completed before the Arab boycott, they remained appropriate because they were conservative.

He also pointed out that the study was limited to 1980, making it further appropriate because "Project Independence cannot realistically ibe expected to produce energy self-reliance until some time in the 1980s." Mr. Loree pointed out that U.S.

production df crude oil is peaking, and has not been able to foe developed fast enough to keep pace with the growing demand. Of particular significance, he said, is the fact that in 1970 America's primary source of imported oil was Venezuela— only 1,800 miles from U.S. East Coast terminals. By 1980, Mr. Loree explained, "it is anticipated that 60 per cent of all U.S. crude oil imports will come from the Middle East, 1-1,500 miles away from the same terminals." The FACS chairman estimated that another 15 percent of crude oil imports will come from northern and western Africa, and the remainder from South America. At the same time, he said that tankerborne petroleum products will foe imported from Europe, Canadian and Caribbean refineries., Mr. Loree said that by 1980, assuming that U.S. deepwater facilities were available, oil imports will require 135 "small" tankers of 45,000 deadweight tons each, 285 "medium" tankers o'f 70,000 deadweight tons, and 72 Very Large Crude Carriers (VLCCs) of 250,000 tons. Should deepwater terminals not be available to accommodate VLCCs, the 1980 requirements would demand a fleet of 135 small and 555 medium tankers. He compared these numbers to 1970, when the fleet needed was equal to only 89 small tankers and 14 medium tankers.

Mr. Loree pointed out that the projected figures are only for the U.S. oil import trades and do not include domestic tanker trades— nor the oncoming Alaska-to-U.S.- West Coast trades. Neither do they include tankers required to cover shipments of crude oil from oilproducing nations to offshore refineries and transshipment terminals, such as those in Europe, Canada and the Caribbean. 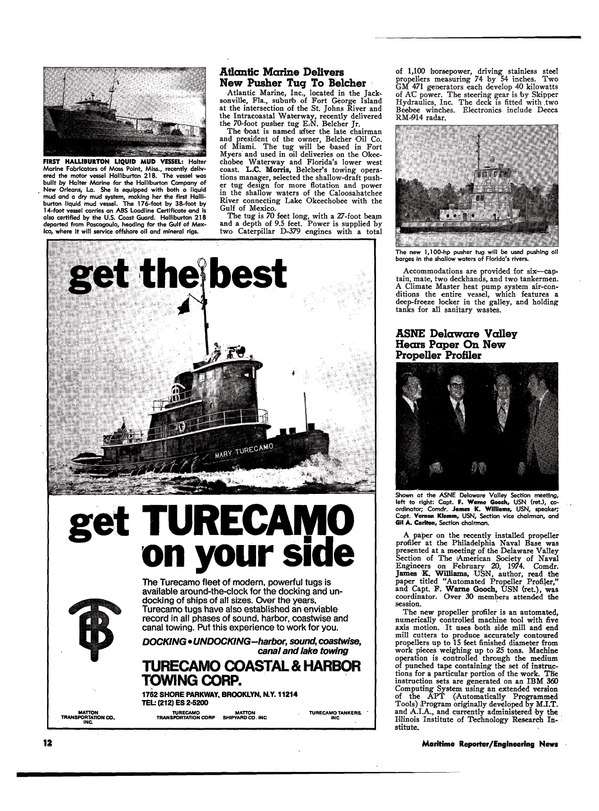