Jacobson Shipyard of Oyster Bay, N.Y., recently delivered the twinscrew tug Chessie, first of two under construction for the Chessie System. Specifically designed for shipdocking, they will service Chessie System's coal facilities at Newport News, Va. The tug Chessie has an overall length of 105 feet, beam of 33 feet, and design draft of 15 feet. The vessel has demonstrated a bollard pull in excess of 130,000 pounds.

The new tug is powered by twin GM Electro-Motive Division diesel engines, model R16-645-E6, each with an output of 1,950 bhp at 900. Each engine drives a Columbian Bronze propeller through a Reintjes reduction gear having a ratio of 4.947:1. Twin Kort nozzles and oversized rudders provide excellent maneuverability. The nozzles and propellers were designed by Kort Propulsion of England; Kort built the nozzles and Columbian manufactured the propellers.

The Chessie has a special Morse Rubber tendering system to handle submarines. The tug's steering system was supplied by Hough Wagner.

Jacobson Shipyard is a full-service facility that specializes in the design, construction, and repair of tugs, ferries, fishing boats, oil skimmers, workboats, and other craft up to 235 feet and 1,500 long tons displacement. 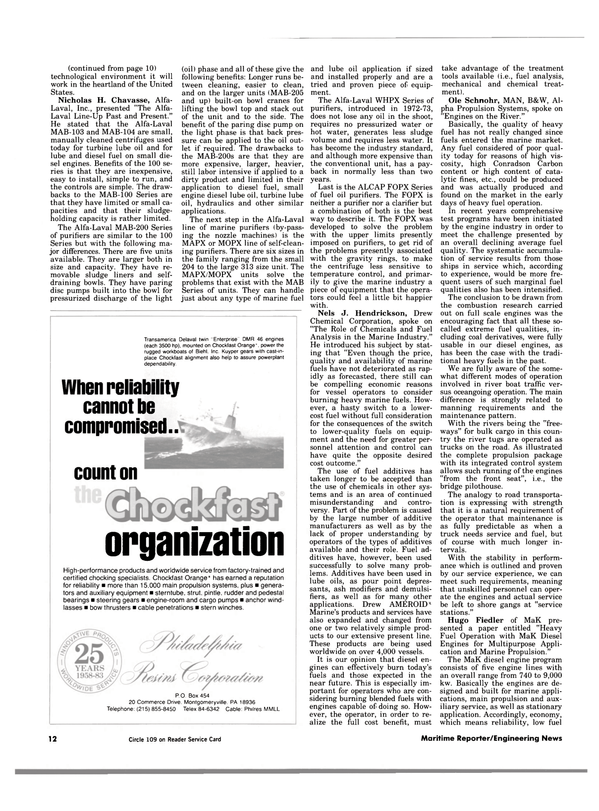