AWO SHIPYARDS AND THE JONES ACT

When President Reagan was campaigning for office in 1980, he said, "Should our shipbuilding capacity continue to decline, American mobilization potential will be seriously undermined because a large reduction in a skilled shipbuilding workforce today makes any increase tomorrow very difficult.

This is a dangerous threat to our national security, jobs, and a key U.S. industry." Sitting on the President's desk when he took office was a report from the conservative Heritage Foundation addressing national maritime policy. Among the suggestions made by this group was a recommendation to acquire foreign ships for subsidized U.S. operation.

It further suggested that Jones Act trades be opened to foreign- flag ships.

The first suggestion, to allow subsidized U.S. operators to acquire foreign-built vessels, has been implemented and the damaging result to the major shipyards is all too clear—that segment of the shipbuilding industry has been exported overseas.

On May 20, 1982, we heard another promise from the Administration.

The then Secretary of Transportation, Drew Lewis, announced the initial elements of the Reagan Administration's National Maritime Policy, and therein, the sanctity of the Jones Act was affirmed.

Everyone hoped that this statement would introduce a new element of long-term stability into the Jones Act, which is extremely important to those who serve the domestic trades.

This stability is again being threatened, for at the November 1983 Annual Meeting of the Society of Naval Architects and Marine Engineers (SNAME), Warren G. Leback, Deputy Administrator of the Maritime Administration, Department of Transportation, coauthored a heavily annotated paper titled "The Jones Act: Foreign Built Vessels and the Domestic Shipping Industry." The paper ostensibly expresses the personal views of the authors that foreignbuilt ships be allowed to participate freely in the U.S. domestic trades. The authors argue that ". . . if the domestic ship-building industry is competitive with foreign shipyards, (the entry of foreign- built ships into the Jones Act) would have no adverse effect on that industry." Further, they propose constructing a fleet of break-bulk vessels over a ten-year period to sustain the shipbuilding base. They recommend that: "A program for constructing twenty vessels per year for the ten-year period would support four major shipyards. These, coupled with the five major shipyards in naval construction, would provide the shipbuilding base." Edward Renshaw, Chairman of the Board, St. Louis Ship, and a past Chairman of the American Waterways Shipyard Conference (AWSC), challenged these proposals.

In his discussion paper which he presented at the SNAME Annual Meeting, Mr. Renshaw stated, "During World War II, St.

Louis Ship built L.S.T.'s and tugs for the war effort. We were but one of the scores of small inland, river, coastal, and Great Lakes shipyards deeply involved." This was not the only attack on the Jones Act in recent years. Legislators on Capitol Hill have been barraged by various interests to give legislative exemptions from the Jones Act for the carriage of passengers, iron ore, coal, petroleum, liquid natural gas, lumber, and other commodities on foreignflag ships. Applications for waivers have been submitted to the federal agencies so that foreignflag ships could operate on a temporary basis. And the AWSC has uncovered and blocked attempts to bring foreign-built barge sections into the United States for final assembly.

The "Jones Act" is used inaccurately to refer to the entire body of U.S. cabotage or coastwise laws which limit, in various ways, the right to engage in the maritime commerce of the United States.

However, the Jones Act applies only to the transportation of "merchandise," not people. Other coastwise laws pertain to the carriage of passengers and to towing, fishing, and offshore services on the outer continental shelf.

From the very beginnings of our existence as an independent nation, the United States has adopted a policy of reserving its domestic trade for its own ships. The basic principles that guided our forefathers are still valid today. A strong domestic merchant marine and shipbuilding base should be promoted for the economic good of the country and as an adjunct to national security forces.

Special interests are pulling this country in so many directions that we often lose sight of the basics which are necessary for our national survival. The shipbuilding industry must take a stand to preserve the laws which provide the cornerstone for its existence. This cannot be done by the actions of several companies acting individually.

It must be accomplished, if at all, by those companies joining forces to take coordinated actions against attacks on the industry.

One such organization exists for the smaller U.S. shipbuilders. It is the American Waterways Shipyard Conference, formed in 1976 by a group of shipyard executives.

After the 1972 amendments to the Longshore Act were passed, they were convinced that the days of "each yard for itself' were over.

The smaller or second tier shipyards have the most to lose if the U.S. built provisions of the Jones Act are abolished. Not another tugboat, towboat, crewboat, supply boat, barge or any other small vessel would be built in the United States.

This complex network of laws makes this second tier of the shipbuilding industry possible in today's climate of foreign-subsidized or government-owned shipyards.

A quote from Theodore Roosevelt never had more meaning than it does today for this segment of the shipbuilding industry represented by the American Waterways Shipyard Conference: "Every man owes a part of his time and money to the business or industry in which he is engaged. No man has a moral right to withhold his support from an organization that is striving to improve conditions within his sphere." The major shipyards have lost their commercial business. Will the same thing happen to the smaller yards? Not if the shipyards realize that there is strength in numbers and support their trade association which is waging the battles to preserve the industry. 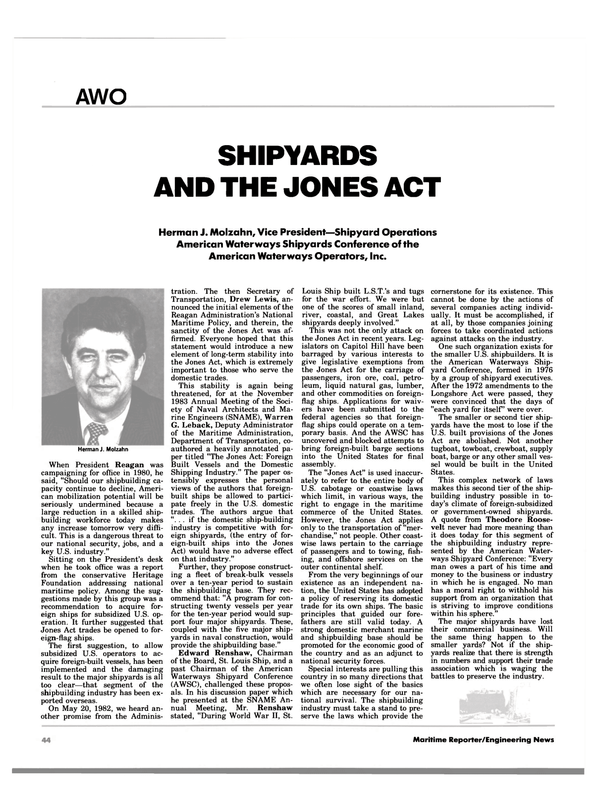