The American Association of Port Authorities will hold its 75th Annual Convention September 28- October 2 at the Omni International Hotel in Miami. Founded in 1912 and headquartered in Alexandria, Virginia, AAPA represents public seaport agencies throughout the Western Hemisphere, from Canada to Argentina, including all of the major public seaport authorities in the United States. Each year, the Association holds its Convention in a different port city. The 1986 Convention, hosted by the Port of Miami, is expected to attract more than 900 registrants.

This year's program continues the tradition established in previous AAPA Conventions in addressing the complex and wide-ranging challenges that confront modern day port managers. Among the topics to be examined in general discussion sessions are strategic planning, the insurance crisis as it pertains to public port management, and the future of the Panama Canal.

Other special workshops will consider the effect of the pending water resources development legislation on port planning and management strategies, factors involved in cargo routing decisions by carriers and shippers, the cruise ship market, maritime and port security (with particular emphasis on the terrorist threat), export trading companies and foreign trade zones as marketing tools, and sister ports.

Among the featured speakers will be former Secretary of Agriculture Orville Freeman, whose topic, "Agricultural Exports and Macroeconomics," is of special importance not only to public port authority management, but to all involved in the marketing and distribution abroad of America's farm commodities.

Essential components of any AAPA Convention are the meetings of AAPA's Board of Directors and the technical and policy committees, the election of officers, and the approval of AAPA's standing policy resolutions.

Of particular interest should be the special social program planned for the Miami Convention. The exciting round of social activity will include a "cruise to nowhere," a "wild hog bar-b-q," and a black tie dinner/dance honoring this year's AAPA chairman, Alvaro Gallardo of Costa Rica. Optional activities range from a tour of the Villa Vizcaya Museum to fashion shows, shopping tours, boat cruises, sporting events, and much more.

In addition, special tribute will be paid at the 1986 Convention to AAPA's Latin American port members. 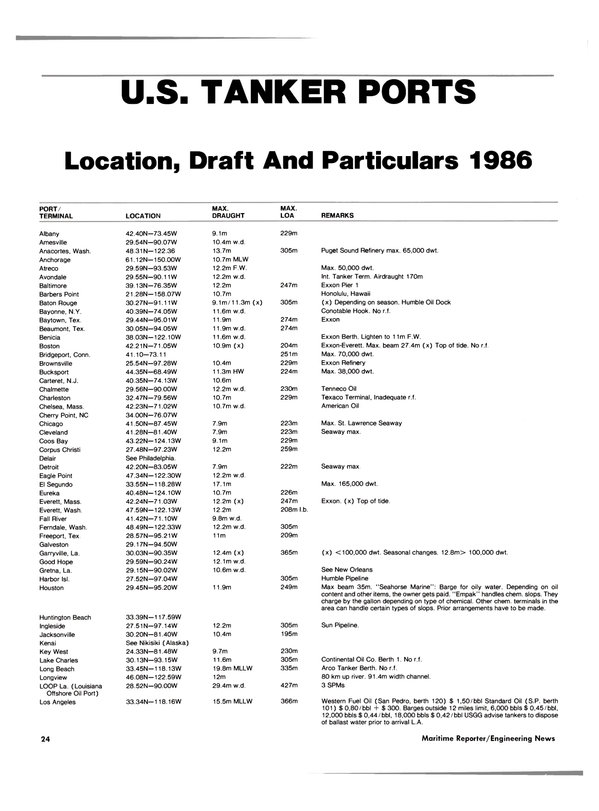