Ketchikan, Alaska, a city "five miles long and two blocks wide," in the words of one area firefighter, has acquired a new, 30-knot fireboat capable of covering that expanse. The Harry Newell, named for the only member of the Ketchikan Fire Department to lose his life in the line of duty, was duty, was delivered recently by Workboats Nrothwest, Inc. of Seattle. It has barged north where it was christened at the city built on a narrow shelf along the Inside Passage in Southeast Alaska.

The all-aluminum Newell culminates a more than three-year effort by Ketchikan to replace a well-used, 65-foot wooden fireboat, which despite its 4,000-gpm pumping capacity, was deemed too slow to serve the city. Ketchikan has been expanding at each end because of the lack of building space on the precipitous mountains along the Passage.

A substantial portion of the city is built on piers, another reason to have a fast, highly capable fireboat.

With an overall length of 45 feet and beam of 12 feet, the new fire/ rescue boat has a pumping capacity of more than 5,000 gpm through four fire monitors. Propulsion is provided by two Detroit Diesel 6-71 TI turbocharged and intercooled engines, each developing 410 bhp, powering the boat via Twin Disc 509 reverse/reduction gears at a top speed of 30 knots. Main engines were supplies by Pacific Diesel of Portland. The builder supplied the bow thruster.

United Fire Service of Issaquah, Wash., supplied the firefighting package. Water pressure is provided by four American 1250 pumps. An Elkhart monitor atop the cabin delivers 2,500 gpm; an Akron monitor at the bow delivers 1,000 gpm; and two Akron stern monitors each are capable of throwing 750 gpm.

The Harry Newell is similar in construction to the Williams, a 45- foot fireboat that has served the City of Portland since delivery by Workboats Northwest in 1984. The yard also recently delivered a smaller firefighting boat to Sand Point, Alaska. Currently under construction are several fire and pollution control boats.

For further information, including free literature on the facilities and services offered by Workboats Northwest, Circle 53 on Reader Service Card 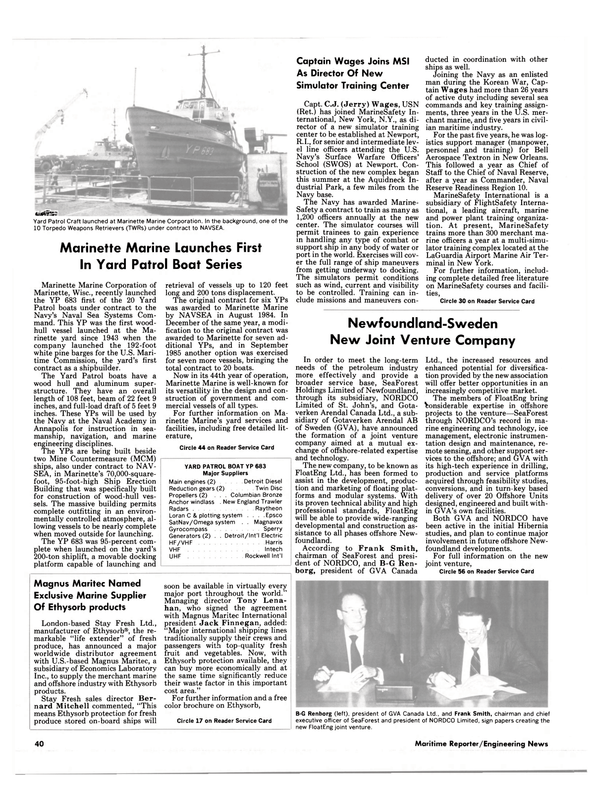