The first of a series of Colt-Pielstick PC4.2 engines built by the Fairbanks Morse Engine Division of Colt Industries has been shipped to Avondale Shipyards in New Orleans, La. The delivery of this engine culminates four years and tens of thousands of man hours related to the planning, parts machining, assembly and testing of the largest engine manufactured in the United States.

Two of these 10-cylinder engines will provide 32,000 horsepower for powering U.S. Navy tanker-oiler vessels. The mission of the tankeroiler ships will be to fuel other ships at sea. The Navy program has begin with the building of two ships, the USS Henry J. Kaiser and the USS Joshua Humpheries at Avondale Shipyards. A total of seven ships out of a possible 20 overall are, or will be, in the building stages at Avondale and Penn Ship.

The advanced designed Colt-Pielstick PC4.2V gives the U.S. maritime and electric utility industry the most compact, highest horsepower, medium-speed diesels with proven realibility and economy manufactured in the United States. The PC4.2V offers a power range of 12,100 kw to 21,800 kw or 16,300 to 29,300 hp in a single engine. The engine has the capacity to burn residual fuel of up to 6,000 sec. Redwood 1 at 100°F with a 400-ppm vanadium content. The bore and stroke is 570 mm x 620 mm. In the T-AO Program, the 40,000-long-ton displacement ships must be versatile, carrying diesel fuel, support personnel and dry cargo as well as being fast enough to keep up with a cruising force. In operation, the two engines will turn controllable-pitch propellers in opposite directions that will enable the 35-foot-draft vessel to achieve speeds faster than conventional supply vessels. 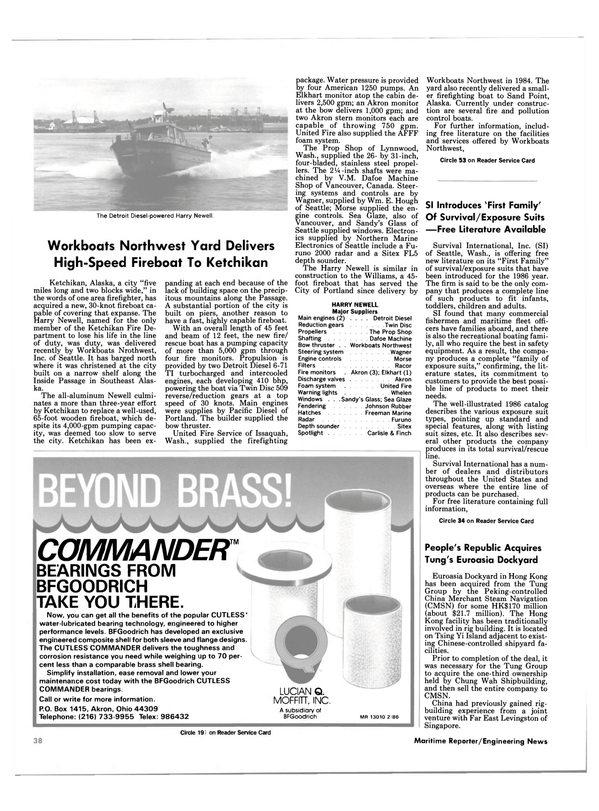